The first hour when a park opens is the best time to ride rides. Should you spend that time eating breakfast with the park's characters instead?

Most theme park vacationers start their day by grabbing a donut or bagel at the hotel before hitting the parks. But many theme parks now offer elaborate breakfast events for fans who want a special start to their day.

But are these breakfast events a good choice for theme park fans? It's a tough question, when one considers that the first hour after a park's opening is the best time to ride the park's most popular attractions – before lines build and the weather overheats. Spend that time at an in-park breakfast buffet, and you're missing out on valuable ride time.

Some parks eliminate that dilemma by opening early for their breakfast event. The gold standard for this type of breakfast is Brickfest, at Legoland California in Carlsbad. Visitors can purchase tickets at any park ticket booth, which allows them into the park at 9 a.m., one hour before the park's scheduled opening time. During that hour, visitors can ride the park's AquaZone Wave Racers, Bionicle Blaster spinner ride and Technic roller coaster, as well as partake in the buffet at the park's Sports Cafe. The spread includes scrambled eggs, French toast, bacon, sausage, fruit, cereal and bagels.

The price for adults is $10.95, $6.95 for kids, and does not include park admission, which must be bought as well. Brickfest continues through August 31.

Early-entry breakfasts, even if they do not include free ride time as Legoland's does, give you the extra advantage of positioning you inside the park when the front gates open. That puts you many steps ahead of the crowd in rushing to the park's most popular attractions.

Many parks target their breakfast events at families with young diners, adding appearances by the park's characters to the morning meal. Perhaps the most popular theme park character breakfast is the Once Upon a Time Breakfast offered at the Cinderella's Royal Table restaurant inside the castle at Walt Disney World's Magic Kingdom. 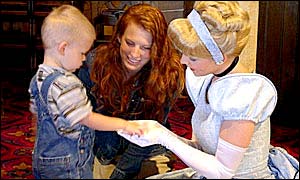 For $29 for adults and $15 for children, diners enjoy an all-you-can-eat breakfast featuring eggs, breakfast meats and French toast. This is not a buffet, however; waiters will bring entrees at diners' request. But the real draw is Cinderella and the other Disney princesses and princes, who wander around the room, greeting diners at their tables. For parents wanting guaranteed one-on-one time for their kids with a Disney princess, this meal fulfills that fantasy, first thing, allowing kids to ride that high throughout the rest of the day.

Visitors will need to call Disney World's dining reservation number, 407-WDW-DINE (407-939-3463), up to 90 days in advance in order to book space at the breakfast, which sells out quickly. If you can't get into the castle breakfast, Disney offers another Princess character breakfast at Restaurant Akershus in Epcot. Call the same number for reservations to that event.

If Disney's breakfasts appeal more to little girls, Universal's gone after the boys with a Spider-Man themed breakfast at Confisco Grille at Islands of Adventure. The Cat in the Hat also appears at the breakfast, which costs $15.95 for Adults and $9.95 for children. The event runs from park opening until 10:30 a.m. everyday. Visitors should call 407-224-4012 for reservations, which are helpful, but not always essential.

SeaWorld Orlando serves breakfast at its Seafire Inn restaurants from 9 a.m. to 10 each morning. The breakfast costs $14.95 for adults, $9.95 for kids ages 3-9, and includes appearances by the park's Shamu character (not the actual killer whale) and some of the park's other walk-around characters. SeaWorld allows visitors to book reservations for this event online.

For toddlers and other young theme park fans, face time with characters might be more important than the rides themselves, making spending that important first hour in the park at a character breakfast a good call for their parents. But if you kids would rather grab an extra ride on Splash Mountain than get a hug from Cinderella, that hour might be better spent getting on as many rides as they can.

We'd like to hear about your experiences with theme park breakfast events. Which ones have you tried? Would you recommend them to other readers? Please click the button below to respond.

From Mark Hollamon on July 24, 2005 at 5:00 AM
I really like the topic Robert! Breakfast is the most important meal of the day and nowhere is the choice you make for breakfast more important than Orlando!

The three main factors people have to deal with is Time, Money, and Quality.

On a time scale, breakfast in the hotel room is often the big choice for many travellers. It also saves a great deal of money beacuse as you outlined in your piece, the prices vary greatly, going all they way up to $30 per person.

I always recommend that if a family has the money, don't cheap out on the hotel or meals because in Orlando they are as much a part of the vacation as the attractions themselves! The themed dining and wide variety of food choices (that are world class in many cases) are things most people can't experience back home.

Also, as you pointed out, at least for Disney the breakfast experience gives you a good position in the park when it opens.

My wife and I have eaten in many parks for all meals. The thing with breakfast is unlike the other meals that are unique, it's pretty much the same all the time and that being the case, $30 per head is a bit steep, even though some feature the characters. If that is important for a family, then it's worth it.

What we like to do is go to a resort for their breakfast buffet. They open earlier and you can get your fill and be at the park when the gates open. Still not your cheapest choice, but it pretty much works the rest of the way!

From Robert OGrosky on July 24, 2005 at 11:03 AM
For me the most important thing about visiting a theme park the first few hours is too ride as many of the top rides as possible.
I wouldnt waste my time that early in the park eating breakfest, the early bird can get on a lot of rides with little to waits that early, so i would eat a good breakfest before going to the park and ride rides instead of eating a character breakfest.
If i wanted to do do that i would do a character meal later in the day when the park is busy.
From Bruce Morgan on July 24, 2005 at 1:42 PM
We've had the character breakfast at the Magic Kingdom's Crystal Palace several times and enjoy it so much that I can't imagine a trip to WDW without it.

Since I've been to WDW close to 50 times, it isn't necessary that I be first in line at the major rides/attractions. For me, a good character breakfast - especially the Chrystal Palace breakfast - is part of the fun and magic of the theme park.

From John Beck on July 24, 2005 at 4:50 PM
I've had the Pooh character breakfast at the Crystal Palace and highly recommend it. I made my reservations before actual park opening hour. By doing this I was already in the park gate, and well fed before the park attractions opened. Thus killing two birds with one stone.
From Melinda Webster on July 25, 2005 at 7:07 AM
During summer peak times the breakfast buffets at Disney open 1 to 1 1/2 hours before the theme park opens. We get the 1st seating of the morning, which 45 minutes you are done with a very filling meal and now are in the park 15 minutes before it opens!
From Ron Viskozki on July 26, 2005 at 10:25 AM
They are a great idea if you have kids. We usually do Chef Mickey's breakfast at the Contemporary Resort in Disney World. We book it for 7:15 so we are finished by 8:15, which gives us 45 minutes to get to the park before it opens. You can have a character breakfast and be the first in line at the park - you just have to plan.
From Josh Counsil on July 28, 2005 at 10:11 AM
I find that the character breakfasts are only worth going to if you have children. Remember, you are there for them, are you not? Do they necessarily want to ride all the huge attractions in the morning?

I've been to 3 character breakfasts: Donald's restaurant at Animal Kingdom (the name is so lame I won't mention it), Ohana at the Polynesian (which was fun thanks to the waiters) and Chef Mickey's at the Contemporary. Although the meals are somewhat fun, the food is pretty poor considering the price.

I prefer something like Whispering Canyon Cafe at the Wilderness Lodge, where the servers are the entertainment, or The Adventurer's Club in Downtown Disney. Much more entertaining and they're open at night, so you don't have to miss the early-morning theme park action. Also, better food for the same price.

From Kevin Baxter on July 30, 2005 at 1:58 PM
Personally, I loathe most of the characters, but my one friend loves them, so we have done a couple of these things, just so I don't have to spend much time doing this out in the parks.

We've been to the Breakfastosaurus (or whatever it's called) at AK twice. Half of that was due to the park's lack of restaurants, and I like spending some time sitting and eating. Our first experience was fine, with the characters circulating quickly. The second time was a disaster. In an hour we saw one character and my friend promised never to return. THANK GAWD!

I much prefer the one at the Garden Grill in Epcot. For one, it's lunch, so I don't have to spend the most important part of the day not riding rides. Second, the food is better, though not spectacular, and the restaurant itself is nice enough so you don't find yourself bored waiting for the next character. Plus, we always eat at odd times, so the characters didn't have a lot of people to see, meaning their time with us was longer than it would've been during busy periods.

The best I have done was another lunch, over at the Confisco Grille at IOA. It was a lunch then (no longer... BOO!) and had a ton of characters roaming through. Cat in the Hat (yay!), the Grinch (YAY!), Dudley Do-Right, Spider-Man, and some genie. I don't know! I think there was someone else but I can't find the pics. Best of all, this is a good restaurant, and I have always felt it hasn't benefited from living in the shadow of Mythos, not to mention its erratic schedule.

I say find a lunch and forget the breakfasts, which is a time when you can get half your rides out of the way.