September 6, 2007, 4:19 PM · Ending almost a year of speculation, Busch Gardens Africa in Tampa, Florida, announced today its newest addition. Located in the area formerly known as Congo, Jungala will incorporate exotic landscaping with some of the world’s most endangered animals.

An artist's rendering of the new Bengal Tiger habitat.

Set in a 4-acre village, guests will see Bengal Tigers, Orangutans, Gibbons and Flying Foxes. The Bengal Tiger habitat has been upgraded from its former area. Unlike before, visitors will be able to get up close and personal with the tigers through a multi-level viewing area. The underwater window will allow for viewing of the eleven tigers through high impact glass. There will also be an air conditioned cave-like area for watching and a suspension bridge which will also provide more viewing vantage points. A special feature of this area will be the “tiger tug-of-war.” Guests will be invited to hang on to one end of a rope on one side of a glass partition while a tiger demonstrates its strength on the other end. 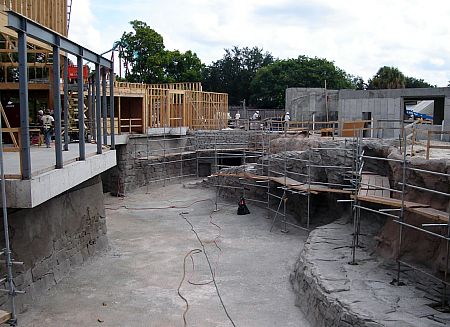 Construction progesses on the tiger area.

Another feature of Jungala is the return of the orangutans. Their habitat was previously located by the Stanleyville train station, but with the addition of Sheikra, they temporarily had no visible home. All of this will change with a huge permanent exhibit area catered to their particular interests and needs. Three 30-foot-tall tree top viewing platforms will allow for the six orangutans to caravan high above guests heads while traversing from one area of the habitat to the other. Glenn Young, Vice President of Zoological Operations, said there will even be orangutans engaging in painting sessions complete with canvas and colorful paint, which will surely be an interesting sight.

A few new animal species will be incorporated into Jungala. White-cheeked crested gibbons, flying foxes and tomistomas (of the crocodile family) will all be permanent residents at Busch Gardens.

With any new addition to the park, there are always new rides and play areas. Jungala has some of both. While maybe not as heart pounding as the Kumba or Montu rollercoasters, two rides are planned that will add unique views of the jungle village. Jungle Flyers is a tree top zip line ride which offers three separate flight paths. Riders will enjoy an out and back ride across the path in a hang glider-like seat. The Wild Surge is a 4-story tower ride which will launch fourteen riders out of a 35 foot tall mountainside waterfall. Tree Top Trails will be a new 3-story play area with bridges, climbing nets, crawl tubes and a maze. 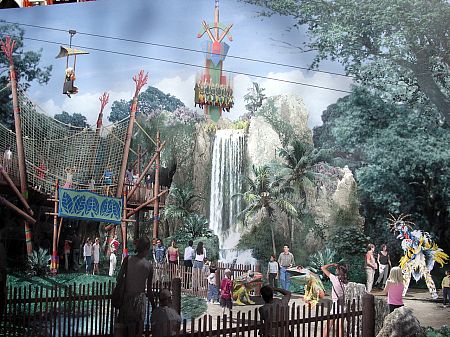 Artist's rendering of Jungle Flyers and the Wild Surge.

For dining options, Jungla is offering two new restaurants. The old Vivi Restaurant will be completely refurbished and opened under the new name of Bengal Bistro. A new restaurant area is also planned called Orang Café. Also, stilt-walkers and costumed village animals will routinely be out and about on the village pathways providing entertainment.

As for an opening date, Dan Brown, Vice President and General Manager of Busch Gardens, stated that spring 2008 is the planned opening for the area. He also said that the original Congo area opened over 30 years ago, back in 1976, and a new animal friendly, family oriented area is a welcome addition. Young, mentioned earlier, said that Jungala is the result of over two years of careful planning between zoologists, engineers, and park planners.

The official announcement, which was also broadcast live online, was held in Gwazi Pavilion. The pavilion was elaborately decorated like a jungle, with tree branches along the ceiling, a river complete with fish, and a rocky “waterfall” behind the stage. Zoologists were standing in the seating area each holding a different species of animal, welcoming questions and some even allowed you to pet the animal.

Following the announcement, we were allowed access to a hard hat tour of the new area. My tour guide was Glenn Young and his excitement over Jungala was evident. One could tell that he is very eager to have the project completed so guests can begin to enjoy it and the animals can move into their new homes.

I feel that Jungala will add a new element to Busch Gardens Africa. This area will attract all different age groups who will find something new and interesting to explore or see. Being a coaster enthusiast, I was a little dismayed to hear that there are no plans at this time to incorporate a new coaster into this area, but being a theme park enthusiast, I am very interested to see how this all comes together and what the final project area will look like. The jungle village of Jungala seems to be a unique yet thrilling area that is unlike anything ever constructed at a theme park before.

Jack Williams
September 6, 2007 at 8:10 PM · That's awesome! I know someone in Florida who'll probably be psyched to see this! Can't wait to see what the new area will be in full form!

Iris Hernandez
September 7, 2007 at 7:19 AM · I'll be the first in line on that day in BGA!!!Even if I have to get there at 7 am and sit in front of the gates. Totally psyched about this new area. That zip line ride sounds really cool. But the tower ride is probably just another Dr. Doom's fearfall ride...Which is cool, anything new to Busch Gardens is awesome and needed.

Joseph Boone
September 7, 2007 at 12:46 PM · I look forward to seeing the new area on my next trip. My wife and I both loved the old tiger exhibit and have been nervous that the changes might hamper viewing of the tigers. It sounds like that won't be the case and I'm very relieved to hear it. I do have some concerns about this "tug of war" and whether it could possibly open the cats up to injury but hopefully that won't be the case.

One note in response to the author of this story. It would hardly be responsible to build a noisy roller coaster on top of all these animals. There are many places in Busch Gardens to build coasters, and they do so with some regularity. The last thing they should do is stress out and scare these poor animals just so you can have one more roller coaster. For that matter, it would also destroy the effect of all the theming and atmoshphere that they've just spent many millions of dollars to create. Don't worry, they'll build another coaster but hopefully they'll do so in a more sensible location.

Erik Yates
September 7, 2007 at 2:09 PM · I love coasters, and am somewhat disappointed that they didnt announce the new hyper....however, I dont think that would fit in this area, and really, though it would be loved, does BGA need a new coaster?
I think on top of the great sounding tower, and zip attractions, a dark ride...something on par with either potc or darkastle would be a far better match than a coaster.
That aside, the video for this thing looks amazing, and they kept mentioning in the press conference "parents want....our guests feel....the guests say this, the guests say that". It sounds like they are actually going to go for more than just a coaster park, and try to make this park more along the lines of its sister in VA, which is definately a good thing.

Joseph Boone
September 7, 2007 at 7:16 PM · Ashley, thanks for clarifying the point about coasters, I didn't even realize there were such rumors. I just imagined how miserable the tigers and monkeys would be as a train went roaring past their ultra-sensitive ears for the thousandth time that day!

I'm a big fan of Busch Gardens Africa and am glad to see them continuing to develop the park. I also agree with Erik that I'd love to see more attractions like Dark Kastle or something similar to further round out your options for fun.

Larry Zimmerman
September 8, 2007 at 9:38 AM · BGA is still suffering from the "Am I a zoo or an amusement park?" schism. We could use a hyper similar to Apollo's Chariot, but not having one won't diminish my enthusiasm for the park. I look forward to seeing the new zone, and trying the menu in the Bengal!

Chris Cook
September 11, 2007 at 11:01 AM · I've been a passholder to this park for about 15 years now. It's been interested to watch the changes and evolution.

I am also interested to see the Tiger Tug-o-War. I'm envisioning major rope burn and/or limbs ripped off by the rope. Hmmmm... Perhaps it should be a Howl-o-Scream event.

In all seriousness, I've played with tigers when I used to volunteer at Big Cat Rescue (forerly Wildlife on Easy Street). Tigers are incredibly strong. I'd love to try a tug of war with one.