February 15, 2008, 12:14 PM · Six Flags St. Louis isn't one of the country's more popular theme parks, so it isn't one we devote much attention to on Theme Park Insider. But this year, the park, the last built especially for the Six Flags chain, will debut an intriguing wooden roller coaster: Evel Knievel. 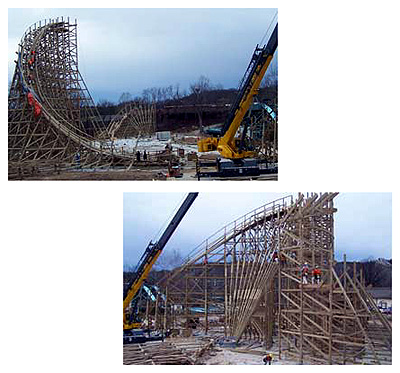 The $7 million CGI design, named for the late motorcycle daredevil, will boast an 80-foot drop and a top speed of 50 mph. The park promises 16 hills and a track that crosses itself 14 times, so expect a typically wild, woodie-type ride, instead of the smooth, sweeping B&M arcs that many parks have been so eager to install over recent years.

The park is shooting for a "mid-summer" opening date, and the minimum height on the ride will be 48 inches.

azcloudy
February 16, 2008 at 9:22 AM · I thought six flaggs wanted to get more families to their parks and were going broke. ??? This seems like they are the same as it ever was. I think the coaster looks good but I would rather go to Orlando or Southern California. It will be good for people who live there.

De Ramsey
February 16, 2008 at 12:57 PM · I live in St. Louis, and I love coasters. So I look forward to riding this one..BUT as I have posted before, that park needs MAJOR overhauling. The park is overall run down and OLD. Weeds all over the parking lot, and basically once you go to Disney you are so spoiled.