King of the Theme Park Graveyard: Round one, day two

May 6, 2008, 11:18 AM · Here are the next eight nominees for Theme Park Insider readers' favorite defunct theme park attraction:

The ExtraTERRORestrial Alien Encounter (Walt Disney World's Magic Kingdom)
Disney ditched warm-and-fuzzy in favor of snarky-and-scary with this early 1990s makeover of the old Mission to Mars space in the Magic Kingdom. The circular room remained, but became a darkened exhibit of binaural and multisensory effects designed to entertain by creeping you out... well, just a bit. Some fans loved it, but others complained, and Disney watered down the thrills over the years, before finally replacing the show with much-loathed Stitch's Great Escape.

Captain EO (Epcot and Disneyland)
At the height of 1980s Michael Jackson mania, Disneyland and Epcot debuted this Francis Ford Coppola-directed 3-D musical film starring the "King of Pop." (And... Angelica Huston?) Captain EO (Jackson) and his ragtag crew have to deliver a "special gift" to Huston's "Supreme Leader" on a dark and cheerless world. Singing, dancing, peace and harmony ensue. That is, until everyone had seen the show a gajillion times, Jackson, um, fell out of social favor and Disney figured people would rather enjoy the sensation of having mice crawl all over them instead.

Kongfrontation (Universal Studios Florida)
Universal took three popular elements of its signature Hollywood backlot tour and built stand-alone attractions for Kongfrontation, Earthquake and Jaws when it opened Universal Studios Florida. Kongfrontation put riders in New York City aerial trams for a tour of the Great Ape-devastated city, culminating with a face-to-face encounter with ol' banana breath himself. (You really could smell the bananas.) A burst of flame, a quick drop and you were soon safely walking back through the immense unload area, with its loads of Kong merchandise. Today, Kong's lair is the home of Revenge of the Mummy. 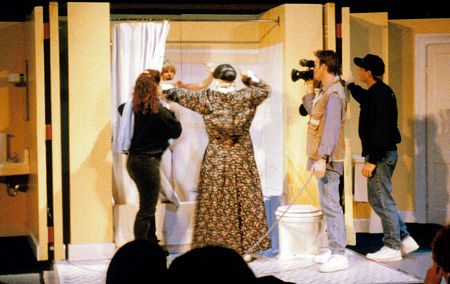 Thanks to Tony Duda for the photo

Alfred Hitchcock: The Art of Making Movies (Universal Studios Florida)
Hitch was a three-part attraction, opening with a 3-D highlight film of classic moments from Hitchcock films. Then, it was into another theater, for a live-action demonstration of how the famous shower scene from Psycho was filmed (with a twist!) Finally, visitors exited into a exhibit hall, a play area for grown-ups, really, where they could walk through and around set pieces inspired by Hitchcock films. Universal chopped down the attraction over the years, eventually replacing it with Shrek 4-D.

World of Motion (Epcot)
General Motors sponsored this whimsical look back at the history of transportation, from rafts and chariots up to the automobile. Visitors rode Disney's Ominmover vehicles through this animatronic dark ride, ending up in the Trans Center where GM displayed its current model cars, as well as a few prototypes. GM's interest in paying for the attraction waned over the years, and eventually it was gutted to make way for the cars-only ride Test Track. 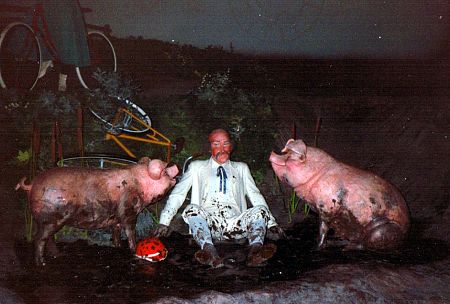 Thanks to an anonymous TPI reader for the photo.

People Mover (Disneyland)
Hop aboard for a ride above and around Disneyland's Tomorrowland. Unlike its sibling at Walt Disney World in Florida, the People Mover seemed pretty low-tech, rumbling above Tomorrowland on somewhat noisy tires. But the highlight for many readers was the "Tron Room," which made use of the shuttered America Sings building with an early computer-animated projection scene that made this slow little ride feel like a high-tech coaster, if only for a moment or two. Disney scrapped the ride for the much higher-tech, to-be-sponsored-by-General Motors Rocket Rods, but... delays in getting Test Track up at Epcot soured the relationship, leading to critical budget cuts for Rocket Rods. As a result, that attraction opened late, and closed quickly.

Skyway (Disneyland)
Once a common site at theme and amusement parks, Disneyland's Skyway shuttled riders through the air from Fantasyland to Tomorrowland (or the other way around.) The highlight, though, was a trip *through* Matterhorn Mountain, a bonus that no other park's sky ride could match. Low capacity, accessibility issues and liability concerns doomed the ride, though. And today, the holes in the Matterhorn are plugged.

America Sings (Disneyland)
When Disney shipped the Carousel of Progress back east to open Walt Disney World, the circular theater in Disneyland's Tomorrowland became home to America Sings, a show that celebrated folk, children's and pop music from throughout America's history. (What this had to do with Tomorrowland remains anyone's guess.) Eventually, Disney closed the show, reusing many of the animatronics for the showboat finale of Splash Mountain. The theater remained dark, save for being used as the Tron Room for the People Mover, until it reopened as Innovations in the late 1990s.

Argue for your picks in the comments....

Robert Niles
May 6, 2008 at 11:26 AM · I liked the Shrek movie, but when Universal removed Hitchcock, it tore a bit of the heart of that park away. Kong was nice, but paled in entertainment value compared with Mummy, and you can still see Kong as part of the Hollywood tour anyway. This is the match-up I am most passionate about, and I hope that readers advance Hitchcock to the next round.

Which, of course, means that Hitch is dead meat. Sigh....

Marc Ricketts
May 6, 2008 at 12:38 PM · PM vs WoM? Tough. Both had a "speed tunnel", my favorite part of both. And there is still a PM in the MK, but without the tunnel. And WoM was replaced by a quality attraction, while PM was replaced by a could've been that never was. WoM was the only thing I was compelled to do twice on my 1st Epcot visit, and is maybe the better attraction. However, if I look at TT in Epcot, and UT (unused track) in DL, I guess I "Miss" the PM more.

Scottland Jacobson
May 6, 2008 at 1:21 PM · Woah! For whatever reason, I am voting completely opposite of the majority on all of my picks!

I only saw ExtraTerrorestial Alien Encounter near the end of it's reign (2000), and thought it was ho-hum. We used to looooove Captain EO. The 3D was very cool, and the story-line was sooooooo cheesy we just enjoyed it for the sheer silliness of it all. Fuzzball the flying "thing" was adorable and you couldn't help but guffaw when the King of Pop feigns anger and says "We're going in!" in a high-pitched voice.

Hitchcock was awesome! Kong was just kind of silly when you added in the completely unenthusiastic ride operator/narrators.

The Skyway was just that...a tram ride. America Sings was just awesome for its day. I can still sing most of the songs from that show as I saw it multiple times..."I'm going to lay down that burden, down by the riverside!!!"

Don't forget that the People Mover had the "Super Speed Tunnel" with race cars prior to the Tron overlay. However, I never rode WOM so I can understand why that may be getting more votes.

I guess my graveyard votes truly are dead...

James Rao
May 6, 2008 at 4:10 PM · My vote for Alien Encounter is more of a protest against the Stitch "attraction" that replaced it. I just want Disney to put something, anything good in that spot!

Can't vote for Kong....I like ROTM way too much. And because I owe Robert Niles at least that much for creating this website.

World of Motion lost my vote because it was replaced by a great attraction in Test Track. People Mover just went away. I don't have a problem with removing attractions to make way for better "stuff", but just getting rid of something and doing nothing with the space is a crime against humanity.

I love skyways....they are a vanishing breed which is a sad commentary on theme parks. There is nothing better than riding a skyway at the end of a long day as you head out of a park. Exhilarating.

Brandon Mendoza
May 6, 2008 at 4:37 PM · I never understood the appeal of ExtraTERRORestrial Alien Encounter. I saw the show over ten years ago when I was a teen, and it bored the heck out of me. Sure it was gross, and creepy, but there was no payoff for all of the sounds and slime. Not a single scary image of the alien in your face, or popping up out of nowhere.

I still think Captain EO is better than Honey I Shrunk... I could care less what people think of him in public, he's a dazzling performer and showman. Any dancer knows that he has affected the world of dance. He makes a simple move look like the coolest thing ever. And no, I would never let any kid visit Michael's house or whatver his ranch is called.

And I kinda screwed up clicking on Kongfrontation... I miss all of the different kinds of special effects things they show at Universal... it's kinda like the Discovery Channel in person... almost like going to Home Depot to learn about something. And Shrek 4-D is just lame.

World of Motion is cool, but I have a special place in my heart for The People Mover.

And America Sings is by far better than Innoventions. Maybe it's because I don't care for having what's the coolest or newest technology, and would rather have a show. I like the Skyway 'specially since it went through the Matterhorn, but I didn't like the wait. And I guess I'm a little spoiled since I can ride something very similar at Sea World San Diego, or the San Diego Zoo.

Manny Barron
May 6, 2008 at 7:41 PM · Kongfrontation was a really neat ride. I had the privalege of riding it back in 2002 for the first and last time. It had lots of detail in the queue and in the ride. It was replaced though with one of my favorite rides in Revenge of the Mummy but I would have liked for them to have kept Kong and built RotM in another locale. Both the skyway and peoplemover should still be in Disneyland because unlike WoM, Hitchcock,EO,and Kong, new and better attractions haven't been put in their place(rocket rods for peoplemover don't count). Alien encounter wasn't that great, but the fact that the terrible Stitch attraction is its replacement, more people seem to miss it. Anyway the three rides that can give Back to the Future some competition in this tournament are Horizons, world of motion, and Kong.

I guess that is some consolation for getting every other vote wrong in this tournament so far! =)

David Sutter
May 7, 2008 at 4:23 AM · Wow ..Robert force us to make a few hard choices..here. But mine are in....Just two poor chices by the mouse...and both at Epcot..Removel of Horizons..and World of Motion...Now dont get me wrong love their repalcements..but can anyone tell me what an Adult version of a kids Ride .. aka Test Track..And a simultaed Trip in space have to do with ..anything futuristic?

Joshua Counsil
May 9, 2008 at 1:10 PM · I'm still bitter at Universal for replacing the amazing Hitchcock with the sub-par Shrek (those pneumatic chairs are so hokey).