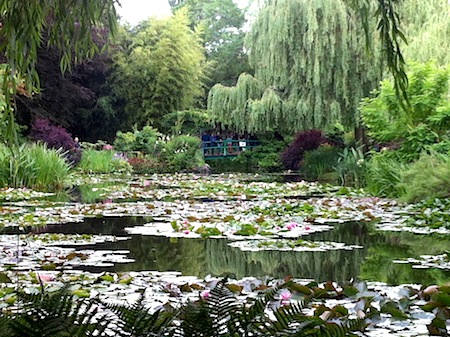 Loyal Theme Park Insider readers will remember that I've called Epcot's Impressions de France the greatest theme park movie ever made. But until this week, that movie represented my closest encounter with the nation of France, as I'd never before visited Europe.

But this month, I brought my wife and daughter to London and Paris for two weeks, and while in the Paris area, we just had to experience some of the sights we'd feel in love with thanks to Rick Harper's exquisite film.

"The majestic gardens of Versailles - the magic window into a golden age of kings." 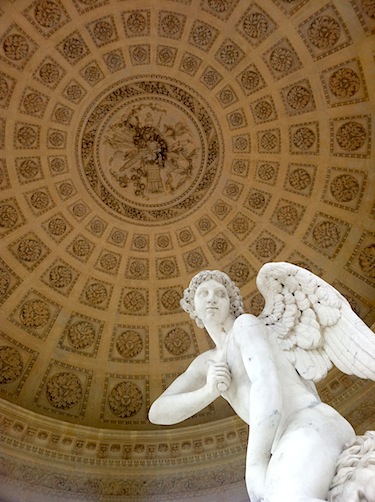 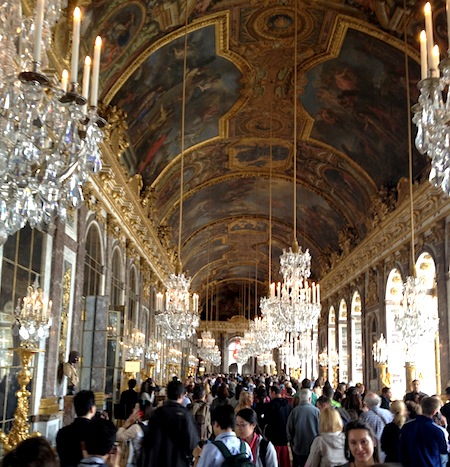 (The Hall of Mirrors in the Palace of Versailles. There were a few more people there when we visited than when the movie was filmed.) 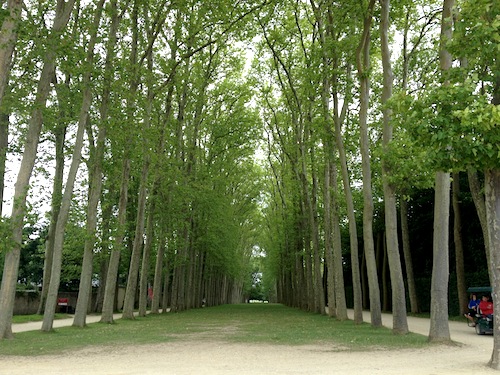 (In the Gardens of Versailles)

"In distant towns, in quiet villages, within the heart of all my people dwells the secret heart of the vagabond." 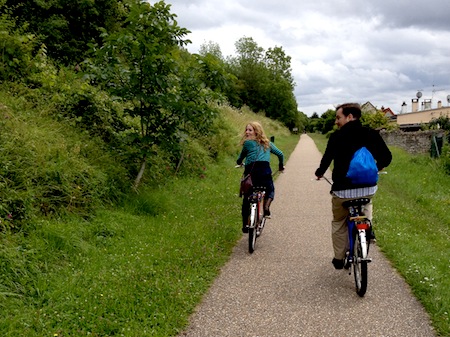 So of course we had to take a bike tour through the French countryside. And a train ride to get there. 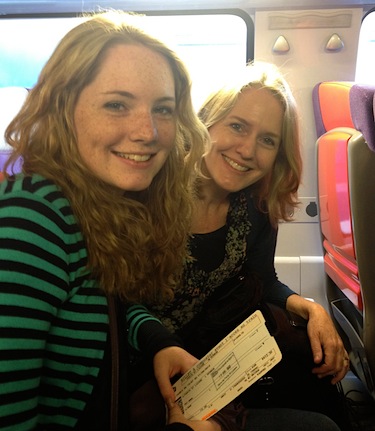 We booked a bike tour of Giverny to visit Claude Monet's home and gardens, through Fat Tire Bike Tours in Paris. This might have been my favorite experience in France - a great trip through the lovely French countryside, not hidden away inside some fortress-like tour bus, but pedaling and walking our way through a delightful part of the country. And, yes, we relived many Disney fans' favorite moment in the movie by shopping at a patisserie, to stock up for a picnic along the Seine. 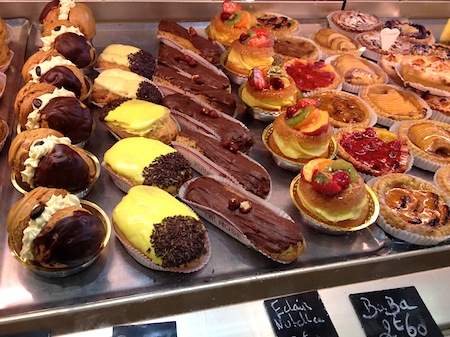 Since we visited in July, we didn't get the chance to go skiing in the Alps. Nor did we venture too far away from Paris, to Mont Saint-Michel, the chalk cliffs of Normandy or "to the golden glow of the Riviera." Nor were we invited to a wedding in a French chapel. But Laurie did attend Mass at Notre Dame. 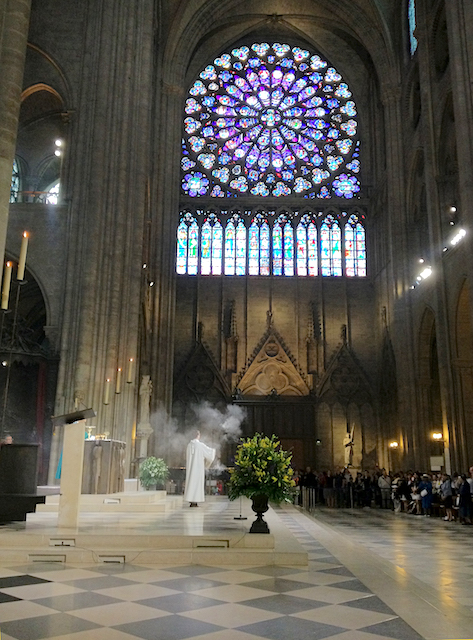 (Look for the hidden Mickeys!) 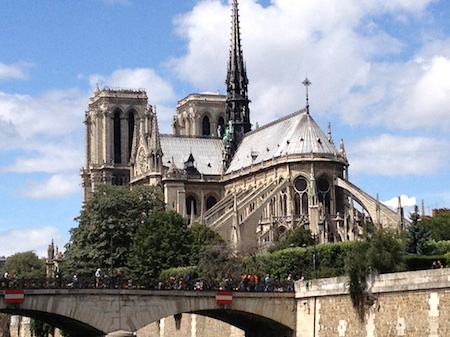 Or the Garde Républicaine riding through the gates of the Louvre. 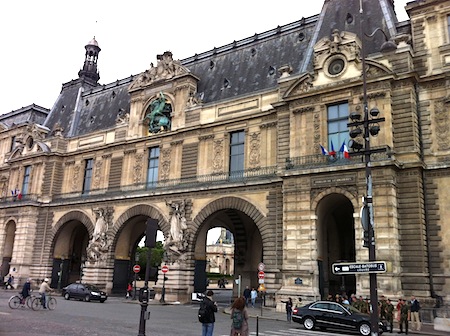 "Bastille Day. Nothing makes us prouder in all of France than to celebrate the birth of our Republic." 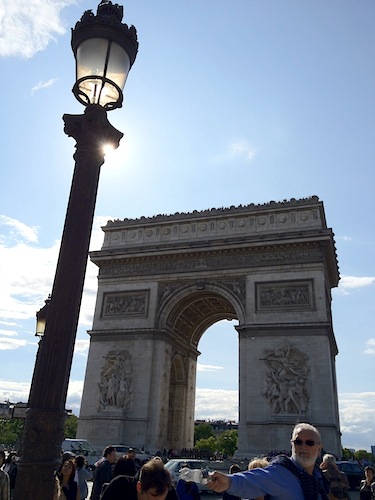 Even though we did visit Paris on Bastille Day, we skipped the crowds lining the Champs-Élysées for the annual parade to take advantage of another July 14 French tradition - free admission to Louvre. And with everyone out on the parade route, we waited just five minutes to get in. 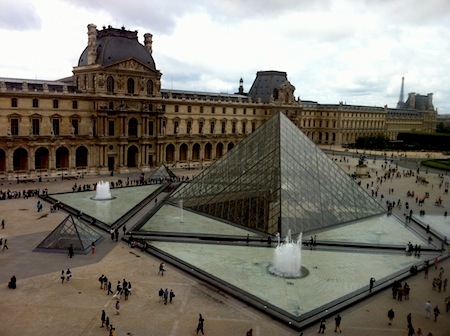 "Paris. The City of Lights. The living symbol of every age, of every season, across my beloved France." 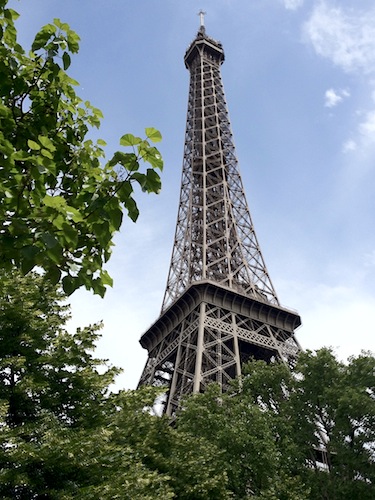 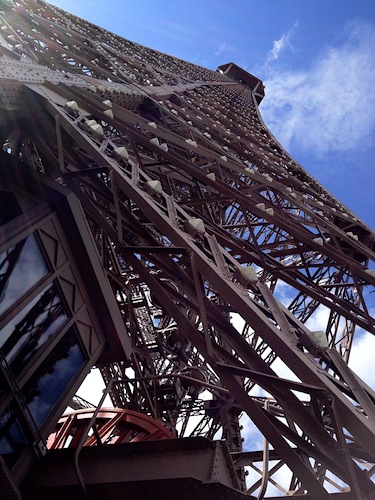 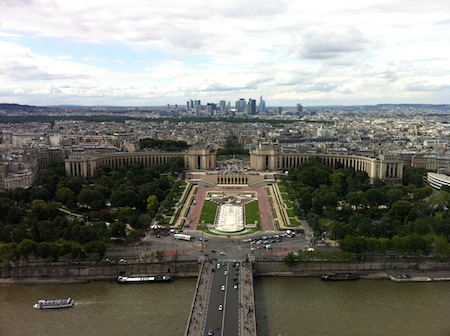 (Okay, we allowed ourselves some fun after walking the 700-plus steps to the second level of the tower.)

Thank you for visiting Robert's Impressions de France. Please gather all your personal belongings, and watch your step as you exit the blog post. 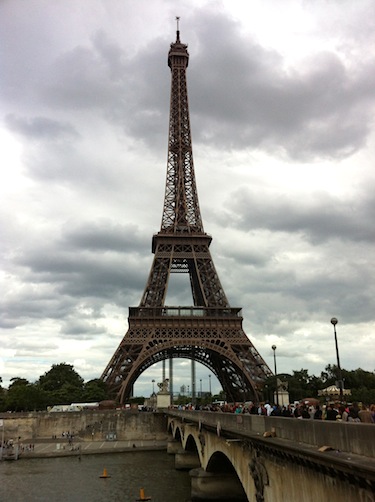 Paris is the only place that I have been in Europe. Very romantic city, and I was blown away by the gardens of Versailles.

Robert, why isn't your son with you? If I may ask.

That was cool. Looking forward to the Disneyland Paris post.

Daniel, I was wondering if anyone would notice that! Brian is in South Africa this month with the Los Angeles Children's Chorus. (With three family members instead of our usual four, that made the Europe trip affordable for us.)

Thanks for sharing those gorgeous photos! Will you get a load of those flying buttresses! I love Gothic architecture.

I did quite a few of the same things you did, but that was back in 2004. It brought back a lot of memories!

Those are some great pictures. Impressions is one of my favorite Disney attractions and your photos are very evocative. All you need is the soundtrack and a gravelly/nasally French voice and voila!

I went to Disneyland Paris in 1993 on January 2nd when it was one degree Fahrenheit. I hope it was warmer for you guys. Looking forward to reading about it.

Robert,
Thanks for sharing with us. I spent a month in Europe about 2 years ago and enjoyed Paris (2 days). I think it's cool that you climbed the Eiffel Tower steps. I did the same thing because I did not want to wait in the long line for the elevator and the price was cheaper. I liked how the steps were numbered. I think it's also great that you did some bike touring. I rented a bike in a few cities (Amsterdam, Prague, etc.) and I think it's a great way to sightsee. I am an avid cyclist and Europe is so "bike friendly". Enjoy the rest of your trip and safe journey home.

I'm loving this tour of France. Great break from the theme parks actually. I would love to see this for myself one day when I'm done with college and establish myself in my career. Paris looks like a very beautiful city. I hear that the people over there are very rude. Is that true? BTW I'm following your tweets with Disneyland Paris, and all I have to say is wow to the whole smoking in line thing. I forgot how advanced we are in America with the no smoking policies. That would really bug me. Did a lot of the indoor lines smell like smoke?

I did the bike trip to Giverny last year, loved it, but especially loved the pastries we bought for the picnic lunch. Paris is an amazing city.

Vote of the week: Anticipation builds at Universal Studios Florida