May 30, 2013, 12:56 PM · SeaWorld Orlando – While guests may still be flocking to SeaWorld to check out the new Antarctica area, apparently one of the penguins already has had enough and tried to follow the visitors out. According to SeaWorld, the penguin was caught quickly and returned back to its habitat after jumping over the short glass barrier that separates it from the Antarctica ride upload area. But we've heard word that a penguin later was seen in the back of a refrigerated truck traveling west on Interstate 4. Was the penguin trying to rendezvous with his comrades at Busch Gardens? SeaWorld officials also are said to be puzzling over a large open bar tab for slushie drinks and herring cocktails, as well as several collect calls made to McMurdo Station, all billed to someone calling himself "Puck."

Disney's Animal Kingdom - For years, scientists have theorized that a massive asteroid collision wiped out the dinosaurs. Today, we know the truth -- it was gun violence. The truth was revealed when a Disney World visitor found a loaded handgun in a ride vehicle at the Dinosaur ride in Animal Kingdom, left behind by whoever apparently did the terrible deed of shooting all the dinosaurs in the past. Who brings a loaded gun to a theme park? I mean, other than Jungle Cruise skippers, but we've always wondered about them, haven't we?

Disneyland - Now has a opening for its outdoor vending crew. Idiots need not apply.

Knott's Berry Farm - Continuing "Theme Parks Gone Wild" week on the Blog Flume Filter, Knott's Berry Farm this morning hosted local media for an event to reopen a ride that's not actually open. The Timber Mountain Log Ride was supposed to reopen this morning after a $1-million-plus refurb, but, apparently, a million bucks doesn't buy what it used to, such as water to fill the flume. 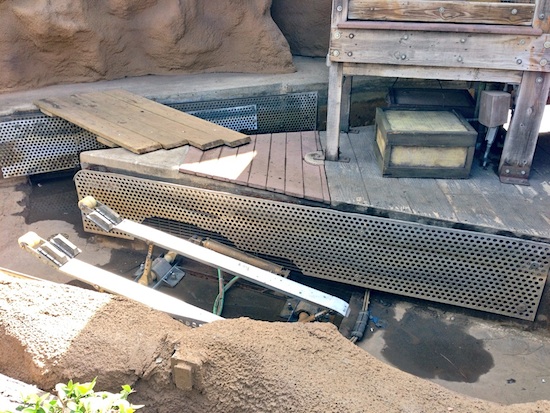 Knott's still brought out Ethan Wayne, the son of acting legend John Wayne, who originally dedicated the Log Ride in 1969. The younger Wayne reminisced about the original opening day, and then… just left, as there was no log to christen and no ride to ride. 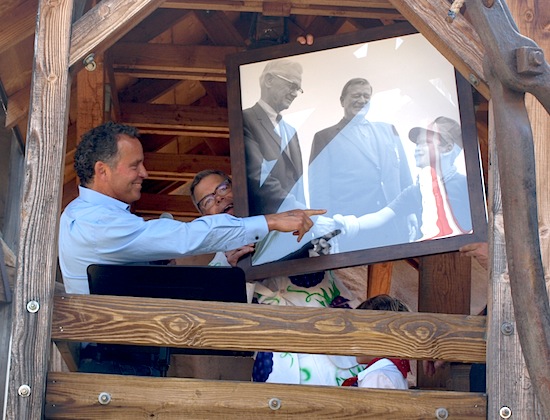 Ethan Wayne points to a photo of himself meeting Walter Knott at the original dedication of the Log Flume, as his father, actor John Wayne, looks on.

It sure looks pretty, though. 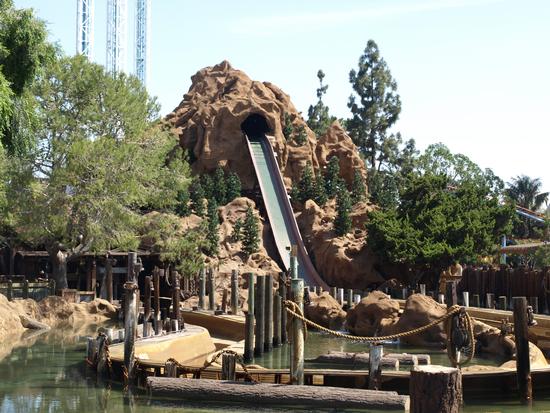 Knott's officials said the ride might be open later today. Or tomorrow.

Six Flags Fiesta Texas – The decorations are already starting to fall off the Iron Rattler, namely the Iron Rattle itself. Maintenance crews immediately removed the rattle from the other train as a precaution before reopening the ride. So the Iron Rattler is now the Iron Rattlerless, which is not really a word and kind of hard to say. Park employees are now looking for another 50-foot rattlesnake to pull the rattle from, as well as enough duct tape and Gorilla Glue to attach it to the coaster train so it won't fall off this time.

Universal Studios Hollywood – Over the last week, an interactive Optimus Prime and Megatron debuted. I don’t know about you, but I keep thinking that he is going to fall over on the kids. I think largely the Optimus Prime works, but the Megatron is just trying too hard to be a bad guy. Maybe if he softened his approach to be more funny instead of insulting it would work better, like if he was out there recruiting instead of menacing. Lines like “Join the Decepticons, we have cookies” would go over really well.


Universal Studios Florida – The park is sending emails out inviting annual passholders to early access on its Transformers ride. The AP sessions are scheduled to start June 9th before the park is opened. Update! Transformers soft-opened to Universal Studios Florida visitors on Thursday evening. And team members are telling park visitors that the Simpsons-themed restaurants in Springfield will open this weekend.

Disneyland – Mickey and the Magical Map has opened and for those of you who can’t wait we have posted a video below. While I was impressed by the stage and the writing, after taking a quick peek I saw microphone headsets. This then makes me extremely impressed with this show as it seems to indicate that the at least the main actors were not pulling a “pop star” and actually singing their parts on stage. Based on some of the chorus sounds it seems like the back ground singers actually were singing as well. Paint me very impressed as a show like this needs at least two talented people for every part and the quality of this show is very high. Maybe you might want to pass on the video and just go see it for yourself.

Mt. Olympus – Hades has a new trick. The Wisconsin Dells amusement park has added a barrel roll to this wooden roller-coaster tribute to the underworld. Also added to the ride? Animatronics in the "underworld" tunnels, representing the PR teams at Knott's, Disney and SeaWorld, who really wish this week from hell would be over.

We have a contest this week courtesy of Monsters U and Disney’s marketing department. Post your answers in the talkback below. Just a little hint, all of the doors are to places in the Magic Kingdom, and there are repeats. 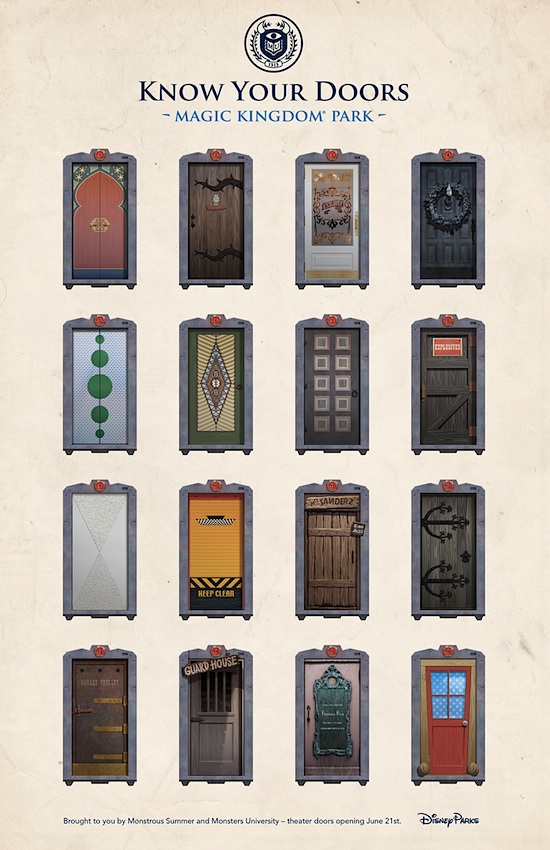 "I don't know what this line is for, or where this door goes, but I'm first!"

Had to say it, sorry.

Thank you for your humor. No. Really. Made my day...

If the gun was left at the ride's vehicle, it could confuse the next rider into thinking that Dinosaur is a shoot-em-up ride.

Funnier than any of the jokes in the Transformer movies.

Where to eat? Lunch at the Columbia Harbour House at Walt Disney World's Magic Kingdom