July 25, 2013, 1:44 PM · Epcot – We're hearing speculation that the Imagination Pavilion is going to close, shuttering everything still limping along inside it, around the first of the new year. Unlike the Wonders of Life Pavilion, it's not going to be as easy for Disney to tuck away this more-prominent pavilion so that everyone forgets about it. Will Disney let another empty pavilion just stand and rot, or does it have some secret plan to knock it down and put up something cool in its place? As always, keep your browser tuned to TPI for the latest news as we attempt to solve this mystery.

Disney's Hollywood Studios – At the end of this Behind the Scenes at Lights Motor Action video, they say that you need to hurry and get to the park to see this show. She's not joking. This is one of the rides that is supposed to be closed to make way for Star Wars Land. And speaking of that development, Disney confirmed that it will offer "teasers" for its new Avatar and Star Wars lands at this month's D23 convention in Anaheim.

Disneyland Paris – Ever wonder what happens after the park closes? Me too, although I expected the people sweeping up the park to be dancing and singing while they swept:

Universal Studios Japan – Biohazard The Real just opened up at this park. It is an interactive experience where you have a gun with a display that tells you how much life you have left before you join the undead. Here is an advertisement for it:

Busch Gardens Tampa – Last week the park started closing an hour earlier, and this week the park is closing two of its bigger table service restaurants, the Garden Gate Café and the Crown Colony House. Don't forget that this follows a ticket price increase earlier this year. Is attendance really so bad that there's no demand for the extra park hours or two major restaurants? Is SeaWorld corporate management getting cheap? Or is the park saving up and clearing space for some big new change that we haven't heard about yet? I would hate to think that in a market as competitive as Central Florida that anyone would dream of making such drastic changes unless there was something huge in the pipeline.

In other news, BGT is starting to really gear up for their Howl-O-Scream event with a series of short character videos.

Amusement Park Safety – It is not every day that you happen to be the right person in the right place at the right time. (I really should have bought a lottery ticket that day.) A TV station in Denver was at Elitch Gardens looking for a local angle on the Six Flags Over Texas accident, and I was there. I did not seek out an interview; I was just irritated with the coverage that the tragedy in Texas was getting and sought to head off the exploitation for political gain before it got out of control. I spoke for about 15 minutes to the reporter before they left the park without talking to anyone else, yet it is only easily digestible sound bites that made the final cut.

Six Flags Fiesta Texas – Wanting to take no chances, the park has closed down the Iron Rattler until investigators have a decent idea of what happened on the New Texas Giant. It might be just the chance they need to glue the plaster rattle back onto the end of the train.

Alton Towers – The Smiler has developed a brand new problem. According to what I have read, there has been a pretty bad heat wave in the UK to the point that many of the projectors used on the roller coaster's various theming elements are overheating and the logo stickers are starting to peel off. But the latest is even a bigger deal. People in the ride queue heard a loud ping followed by a bolt dropping onto the top of the covered queue. Not knowing where the bolt came from, the ride was shut down. It looks from the picture below that the heat caused enough stress on the rails to sheer off a bolt with the expansion and contraction as the ride is heated and cooled in the sun. No one was hurt, but this ride is going to be down for a bit as they try to figure out why this happened and get it fixed. 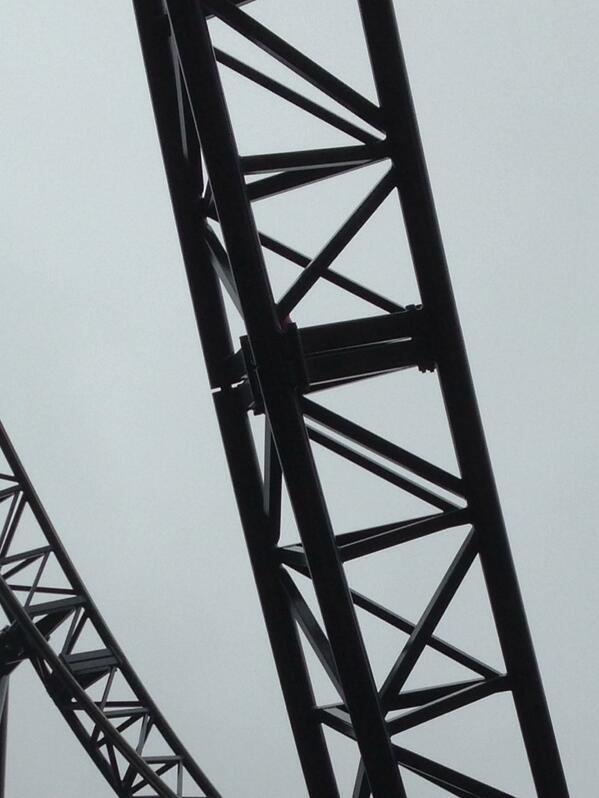 Disney Research – Whoever is in charge of this R&D at Disney needs to receive a fat bonus and a promotion, although they'd probably then get fired for spending way too much time and money on something that doesn't fit around a customer's wrist. For this device, Disney would be able to simulate someone in a 3D movie reaching out and grabbing your shoulder…and that is just the first use that comes to mind.

Lost Parks of Northern California – Luna Park – This is Episode 2 of a wonderful series. If only we can convince them to do some history for a state that is a little bit farther away from the coast… Maybe, like, Colorado, or something. I mean, even most Californians only have a vague idea of where Northern California is.

Share any other theme park news you've heard, in the comments.

Is there any source other than a single Facebook Page post regarding the Journey Into Imagination rumor?

I haven't tracked back a solid source on the Imagination speculation, but I will remind everyone that Tony Baxter declared that pavilion "broken" in front of Eric Jacobson at IAAPA last November, and none of the Disney Legends or current or former Imagineers on the panel objected.

The only reliable source that has said something is Spirit on WDWMagic, but he's only said the pavillion will be down for a major refurbishment.

D-Squared, Apologies for the "push back" but what makes "Spirit on WDWMagic" a "reliable source?"

He was the first to say SS44 is becoming Transformers, so that's pretty credible.

Based on your sound bites, it would seem Elitch's would be gaining a great advocate if they got their act together and hired you for PR.

FYI Guys, Smiler at AT was back up & running on 10.30 Wednesday morning.

The Smiler at Alton Towers was rushed in opening and has been set with so many problems it is a joke. With queues of up to 4 hours you are lucky to actually get on it before it breaks down. I know they had to get it open for the summer season but almost daily break downs are not putting the park in a good light at the moment.

I actually spoke with the PR people at the park to let them know what I had done and they seemed a little irritated that I took the initiative, since their policy was to keep quiet about the whole thing. I get the feeling that "let it go away on it's own" is a much used policy at Elitches.

Thanks for the fist bump, TH!

I'm surprised that there isn't more debate on BGT...that is the one that has me questioning what they are doing...

The Smiler has not been closed most days. It has had some 'running in' issues but not really many more than you would expect from any new coaster. The long lines to ride are typical of any new ride and not surprising for Alton Towers in the summer. Today there is a posting on Facebook reporting that the wait time has been just 30 minutes all day. And yet again no issues. It was open two days after the 'flying bolt' issue which appears to be heat-related. Rather than being a 'joke' The Smiler appears to have garnered very positive reviews, in some polls is now Alton Towers' best ride, and has performed pretty much as the management would want, (accepting that it opened late because of the delay in build tie, as a result of the extreme weather over winter....

Screamscape said months ago that a new attraction was rumored to be coming to Epcot in 2015. It needs to go somewhere and the Imagination pavilion is as good as any. But how can Disney build a new attraction in less than two years? Obviously it will be a clone. My guess... you heard it here first:

Mystic Manor. Hopefully with Figment instead of the monkey.

Where to eat? Lunch at Hersheypark Place