Butterbeer in a bottle? 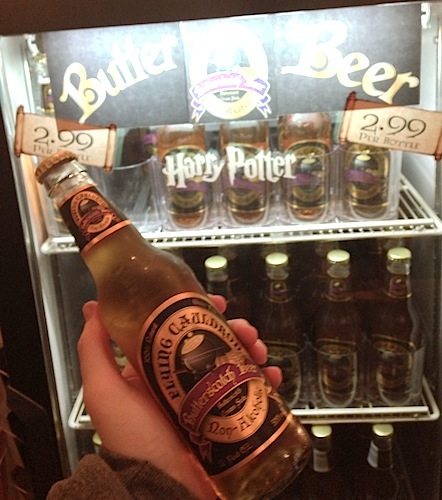 We found this wizardly treat, appropriately enough, in a store in Salem, Massachusetts. Despite the sign on the display case in the witch-and-wizard-themed souvenir shop, the name on the bottle's not actually called "Butterbeer." (Warner Bros. has that trademark for beverages.) The product's called "Flying Cauldron Butterscotch Beer," and it's from Reed's soda company, also known for Reed's Ginger Beer and Virgil's Root Beer.

So how does it taste? As one might expect, like a butterscotch cream soda. I thought it tasted like Universal's Butterbeer — the non-frozen version, at least — minus the creamy foam "head". The bottle helpfully suggests a "Giggle Portion Recipe" — adding a scoop of vanilla ice cream to achieve that a creamy, foamy effect.

If you'd like to order a few bottles for yourself and your favorite wizards, you needn't fly your broom or apparate to Salem. Reed's takes orders on its website, and ships to the lower 48 US states. A 12-pack costs $16, and a 24-pack costs $28. Tax and FedEx shipping added another $10 for delivery to California — those costs vary by state. Or, if your local grocery stocks Reed's or Virgil's products, I suppose you could request that they put in an order for "Flying Cauldron Butterscotch Beer," too.

If you've seen this drink in a store, or have tried it yourself, let us know in the comments.

Update: I also found the Butterscotch Beer and a certain Disneyland favorite at Jungle Jim's, a national chain of specialty groceries.

I have to admit that I didn't like my second bottle of Butterscotch Beer as much as the first. And I think that's because I didn't wait for it to get ice-cold, as the first bottle was. The warmer "butterbeer" just crushed by taste buds with a too-sweet aftertatse. Some cold creaminess definitely would have helped round out the flavor. So, if you can't wait to completely chill the drink, go for the scoop of ice cream.

(FWIW, I didn't buy the mint julep. That stuff tastes like mouthwash to me....)

I've had it before up here in Northern Idaho. The local ACE Hardware carries it. It's okay, not the best, I didn't feel like it tasted like Uni's Butterbeer, but that's just me.

I dunno about Butterbeer in a bottle. But I can say emphatically that Virgil's is the very best root beer I've ever tasted. It used to be imported into the U.S. from England before Reeds bought the rights to make it here.

What makes it so great? It's possible to taste individual flavors like Vanilla, Liquorice and Mint in the beverage -- something the mass produced brands like A&W did away with long ago in favor of artifical flavorings.

Last time I was over there (about a month ago), Galco's Old World Grocery had Flying Cauldron soda.

We bought a bottle, but haven't tried it yet.

You can also buy these at a place called "Rocket Fizz" here in California. I find it to be quite good and close to the real thing, aside from the delicious foam of course. I recommend it.

Virgil's makes absolutely the best sodas on the planet. After you try their stuff, you'll never go back to Pepsi and Coke garbage again. Try the Black Cherry Soda, it's fantastic. You can taste the natural flavors of their sodas, and not the corn syrup and other trash put into the mass market brands.

Much to my surprise, a local bar here (just north of Orlando) stocks this stuff, and it is delicious. It tastes VERY similar to the real thing. I haven't tried it with ice cream but that sounds pretty good...

When I read your article about Flying Cauldron Butterscotch Beer, I remembered having seen it at a snack kiosk at one of our local malls here on the island of Oahu in Hawaii. Thanks for giving me an excuse to try it and compare it to the real deal that we had at Wizarding World of Harry Potter last summer in Orlando.

My ten-year-old daughter and I really enjoyed Butterbeer, both the frozen and the "cold" versions. Her preference was "Icee-style" as we called it, while I believe I preferred the mug full of creamy, cold-but-not-frozen goodness. Yes, we sprang for the mug.

Also, here in Hawaii, they'll hit you up for $3 per bottle! No real surprise there, if you've ever been here or lived here. Everything is more expensive.

All in all, we enjoyed it, and it brought back awesome memories of our day at Universal's Islands of Adventure, but I wouldn't rush back over there to grab another bottle. I suppose if we ever had any reason to have a Harry Potter-themed party, though...

Out here on the West Coast there is a chain of stores called "Rocket Fizz" that sells this in single bottles, either off the shelf or from a refrigerated cabinet. They also have 6 packs. The are priced about the same as mentioned above. But out here it is named Golden Cauldron but is from the same distributor. I love the stuff and it's the only soda pop I will drink. And a scoop of Vanilla (or Vanilla Bean)ice cream really adds the foam and is really good tasting.