April 18, 2018, 11:12 AM · The world's newest major theme park will open this July. Warner Bros. World Abu Dhabi today announced that the indoor park on Yas Island in the United Arab Emirates will open officially on July 25, 2018.

We have been previewing the new park as it has announced its attraction line-up over the past few months. Themed to Warner Bros.' animation franchises, including DC Comics and Looney Tunes, the 1.65 million square-foot park will include: Gotham City, Metropolis, Cartoon Junction, Bedrock, and Dynamite Gulch, as well as the Warner Bros. Plaza entry land. 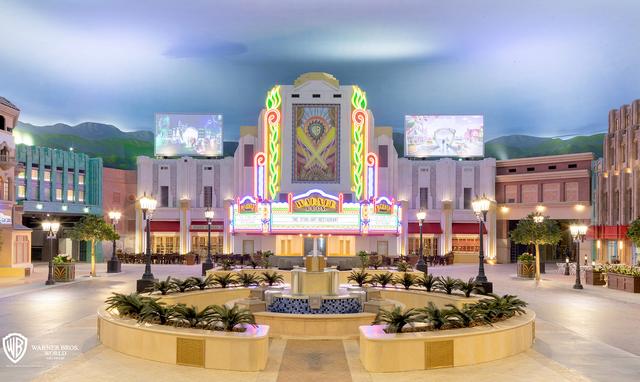 "The launch of Warner Bros. World Abu Dhabi is yet another milestone in the Emirate's journey to further enrich its tourism offering, and help establish it as one of the world’s leading tourist destinations. The park is another great addition to Yas Island’s immersive experiences and award-winning attractions," said Mohamed Khalifa Al Mubarak, Chairman of Miral, which is the developer of the park, as well as Ferrari World Abu Ahabi, Yas Waterworld and other destinations in the Emirate.

The park posted a highlight video of today's announcement, which includes a sneak peek at some of the park's new lands.

It really doesn’t matter how many theme parks they open in the Middle East, nor how splendid (or otherwise) they are. The Middle East simply isn’t on my list of places I’m going to go, and I suspect I am not alone. I admire their confidence and I can’t criticise any company that creates new theme parks as, after all, the world can always do with new theme parks). But as before I question the location and whether any number of new parks will lead to an increase in visitors.
I predict that this park, like all the others, will fail to meet its projected visitor numbers. Fortunately it is supported by money that will not, at least in the short term, be bothered by failed projections.

I would never wish that a theme park not succeed. However, I just don't think that indoor theme park settings do well at immersing a person into a land (one of the few exceptions I can think of is the Mexico pavilion in Epcot - always loved what they did there). I like what they did with Bedrock's cloud lighting for creativity, and some of the city-scape background looked really cool, but by most of the images shown make it difficult for me to believe the experience will be as immersive as a great theme park needs to be. Despite being nowhere near Orlando, you can actually feel like you are in Jurassic Park, Hogwarts, Diagon Alley, hidden alleys of Paris, Morocco...heck, even the planet Pandora. All set in the wonderful outdoors.
Those visitors didn't look like they were outside of the Hall of Justice in Metropolis. They looked like they were in a mall.
I hope it does well, I really do. I realize the Arabian peninsula is not an ideal location for an outdoor theme park, but indoor ones just look claustrophobic, to me.

I think it looks pretty cool. And like BG said, the Mexico pavilion does a great job of immersing you, while indoors. Mexico pavilion is perpetually at night, and therefore, I think they went the best route for the DC portion - I'm guessing it's Gotham.

The biggest challenge for this part of the world is the ungodly high temperatures. Making an indoor park may not be what is normally preferred, but there really isn't another option here, and from what I saw, they've done a nice job with the cards they've been dealt.

Building a world-class park in Abu Dhabi must be prohibitively expensive, and there's no guarantee of success. At the same time, if they skimp on the quality, there's no reason for anyone to visit. It's a huge gamble, and I really hope it pays off.

Obviously the attractions lineup will determine whether it gets on my radar. I can't say going to the Middle East is on my bucket list, but you never know.

They didn’t make these parks for Westerners and they don’t care if you and I won’t go. I imagine for someone living in that part of the world an indoor amusement park is the an ideal escape from the heat.

I'm just not a fan of indoor parks, water or otherwise. I think it looks cool empty but when the crowds load in...

I think it looks cool. I understand the reasoning behind making this an indoor theme park, but I think the ceilings are too low.

Like B Goodwin said, some of it looks similar to a mall. Perhaps if the ceilings were higher it would open up a bit more.

Still, cool that another theme park is opening. I hope that it finds some success.

Everyone who is saying they don't care for indoor parks has never been to a park that is going to be as well designed and though through as this one. I still hold my breath for its success, but from what I know of the line up of attractions and amenities, this one is poised for a break out.

I live in Abu Dhabi so I'll definitely visit the park. But I don't have any kids here so it will probably only be a one time visit. My impressions from the video is that it's just a bunch of dressed up carnival rides which wouldn't be worth the $80 admission price.

For all the hype, this is essentially just Six Flag type attractions. There is no immersive attractions that come anywhere close to what Disney or Universal are offering up.

Any true fan of DC comics or even someone who grew up watching bugs bunny and other toon of WB will appreciate it. I am one of them who is looking to travel on opening day all the way from UK.

I know it will succeed as they have 2 other theme parks near by and yet to build a third one with a 4th theme park to come in 3 years time says that they are making the money and it will be a success.

"If you build it, they will come." - I think this is the one exception to that rule.

This is a classic example of stupid money.

I think if it sets a scene the way that the Dreamworks land does in Motiongate Dubai then it will be well worth a visit. I visited that last year and it was worth the entry fee alone to motiongate as part of a 1-day / 2-Park pass.

They are still pricing out western travellers though and wonder why attendances remain low!

Holy cow, this is absolutely next on my visit list. Shanghai Disneyland Resort in September, then Abu Dhabi in 2019!

When you go to Disneyland you visit an American park. It's that beating hart of it's culture you can feel in every part of the theming and rides. The same can be said for Efteling in the Netherlands and Tivoli Gardens in Denmark to name a few.
This is non of that, it's a concept, a product trying to emulates the Orlando success. It misses cultural roots. It also misses unique ride systems. In the end it misses an identity of it's own making it look like a cheap copy.

How changing demographics are changing the theme park business

Henri Landwirth, Give Kids the World founder, passes away at age 91