October 5, 2018, 6:21 PM · Actress Mackenzie Foy visited the Disneyland Resort this week to celebrate the debut of Disney's in-park preview for her new movie, The Nutcracker and the Four Realms. 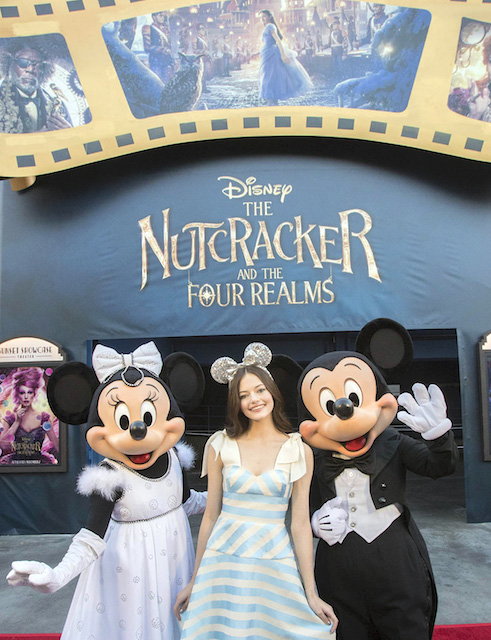 The latest twist on the holiday classic "The Nutcracker" sees Foy playing Clara, the young girl whose brother (*see comments) gets a toy soldier nutcracker for Christmas. Co-directed by Academy Award nominee Lasse Hallstrom and Disney veteran Joe Johnston (The Rocketeer and Captain America: The First Avenger), The Nutcracker and the Four Realms opens November 2. But guests at Disney California Adventure and Disney's Hollywood Studios at Walt Disney World can catch a 12-minute preview in the Sunset Showcase Theater or Walt Disney Presents theater, respectively.

But if you're just watching from home, here's the 90-second preview. ;^)

If all you told me was "new movie from Lasse Hallstrom starring Keira Knightley, Helen Mirren, and Morgan Freeman," I would be 100 percent in. Say what you will about Disney recycling established franchises, but at least they hire darned good film pros to do stuff with them.

I doubt they’ll have Morgan Freeman in the preview. He’s been absent from any new commercials and trailers I’ve seen.

He is in the preview, in several scenes.

The Walt Disney Company has refined cross promotion to a science. Credit to Michael Eisner.

I smell a flop for Disney. Today's movie audiences just aren't interested in (to use the term somewhat loosely here) original movies with a big budget unless they are animated. It won't help that The Grinch and Fantastic Beasts 2 will be looming in the coming weeks shortly afterwards.

Walt once said “I do not like to repeat successes, I like to go on to other things.” Disney has struggled with putting that into practice even when Walt was still around, but its gotten even worse in the last decade. I don’t mind if Disney never ends Star Wars or Marvel movies, because there’s a million stories to create or adapt that would still be interesting. But they need a bigger variety of new films. I watched The Rocketeer for the first time today and was amazed. A movie like that wouldn’t be green lit today. With Disney buying Fox, I’d love them to cut back on all the remakes. I’m excited for this movie because its not something Disney has made before. I’d rather Disney make a few live action movies that are unique, instead of a bunch that are mostly a variation of something Disney has done before.

I just watched the preview at DCA last night. I believe you're wrong about the Nutcracker. Her brother received the Nutcracker. She received an egg that required a key to unlock it. She was in search of the key, following the string, & just as she was reaching for the key, the mouse (rat) stole it.

Everyone is entitled to their opinion, but no matter what you say the movies produced by the various Walt Disney Studio divisions, have resulted in more successes than failures.

The seven deadly sins of running a theme park

What ride system do you most want to see at more theme parks?