October 25, 2018, 9:51 AM · If you think you know the way to Disney's Hollywood Studios at the Walt Disney World Resort, Disney is changing it. The resort announced this morning that it will open the new road access to the theme park on November 8.

That means that guests no longer will be able to drive to the park via its current entrances off World Drive from the south and its smaller entrance off Buena Vista Drive from the north. Instead, the main entrance to the Studios park will move to the east side of the parking lot, with primary access coming from a ramp off Osceola Parkway. 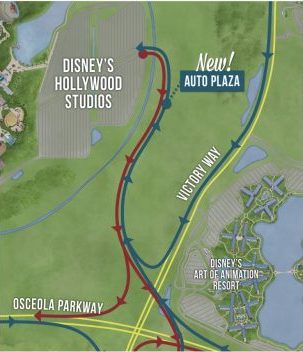 So if you are driving to Disney World from Interstate 4, to get to Disney's Hollywood Studios you will take the FL-417 Osceola Parkway exit. But instead of proceeding to World Drive to get to the Studios entrance, you will take a new entrance ramp just past the Art of Animation Resort. If you are on Buena Vista Drive, you will be directed to head south on Victory Way to pick up the new Studios entrance road instead of pulling straight into the parking lot. (That existing entrance will become for buses only.)

Again, the changes take effect on November 8. Until then, you drive to Disney's Hollywood Studios as before. And even after then, construction will be continuing around the park's front, as Disney works on the new Disney Skyway gondola system that will connect DHS to the Caribbean Beach hotel, going on to the Art of Animation and Pop Century, as well as the new Riviera Resort and Epcot.

That doesn't come anywhere close to what it's really going to be like when SWL opens next year .... LOL .... :)

Right now I can't even think of a description .... anyone ??

Hi Robert! Are you going to cover the recent news regarding new details of the Marvel land at Disney CA adventure and the mini Indiana Jones land at Hollywood studios?

I think he answered that question in a column last year about theme park rumors...

This site tends to take a more journalistic approach (since it's owned by one) with any formal reporting regarding unannounced projects needing to be substantiated to a certain degree by trusted sources.

Very cool news!
In fact, the gondola gives these value resorts a lot more...erm, value. Take a gondola to Hollywood Studios, then a nice, long walk or easy boat ride to EPCOT, and then hop on the monorail to TTC and then monorail or ferry to Magic Kingdom.

Sure, that may seem like a lot. But being able to hit up 3 of the parks without requiring the use of a bus from Art of Animation / Caribbean Beach? That's pretty awesome.

Actually Gabriel, there's a leg of the Skyliner that will connect Caribbean Beach with EPCOT. Guests would not have to go to DHS and take a boat or walk. They will be able to take the Skyliner directly to EPCOT's International Gateway.

I would also contend that taking a bus to the Magic Kingdom is superior to the Skyliner/Monorail approach. A bus from the resorts connected to the Skyliner lets guests off right a MK's front gate. You don't have to take a monorail or boat from TTC to reach the MK. Your route would require multiple transfers plus a long walk from the back of EPCOT to the front gate. If you're able, I would almost always recommend taking a bus to MK to avoid the mess at TTC and the inefficiency of the monorail getting to MK.

So many GREAT transportation decisions have been mate at WDW. There's the designated bus lanes and (complimentary) smart parking garages at DSTP. The Skyway system, boats and monorails. The new overpass to bypass the toll plaza that provides access to the MKP signature Disney resorts. The soon to be complete overpass/interchanges near DHS and the ESPN complex. The pedestrian walkways that allow traffic to flow more at DSTP.

Lots of good stuff when it comes to moving people around the WDW property.

Here is how theme parks could host a night without children