Disneyland released its holiday menu, and it's ridiculous

November 2, 2018, 4:30 PM · You probably can forget about crowds letting up over the next couple of months at the Disneyland Resort. With Halloween Time giving way to the Holidays at Disneyland, the resort is looking to keep people lining up with another amazing collection of themed eats.

With its huge number of local annual passholders, Disneyland has developed a tradition of using themed food to drive repeat visits from those passholders during the holiday seasons. A few peppermint-dusted cookies and hot cider won't cut it anymore. Disneyland goes all out with an onslaught of savory and sweet temptations. Even someone who visits every day of the season probably could not get to them all.

So let's dive into the menu, which Disney released today, starting with the top savory items on our "to-eat" list.

I've noted a couple of callbacks to previous seasonal menu selections in the parks. The Carnation Cafe in Disneyland will be offering a Roast Beef TV Dinner, topped with roasted shallot and sun-dried cherry demi sauce, served with mashed potatoes, haricot verts, and carrots, with chocolate croissant bread pudding and creme anglaise for dessert. It's a holiday version of the Carl Fredricksen TV dinner that the restaurant offered last summer for Pixar Fest. And at Flo's V8 Cafe in Disney California Adventure's Cars Land, there's an Open-Faced Turkey Sandwich on the menu (served with roasted garlic mashed potatoes, seasonal vegetables, and gravy) that calls back to the roast meat blue-plate specials that Flo's used to feature.

Back at Disneyland, the seasonal hot dog at Refreshment Corner is a Philly Cheesesteak Hot Dog, topped with sliced roast beef, peppers, onions, and cheese sauce. Rancho del Zocalo also has a Chile Relleno, and the Bengal Barbecue's seasonal option is Lamb Kofta. 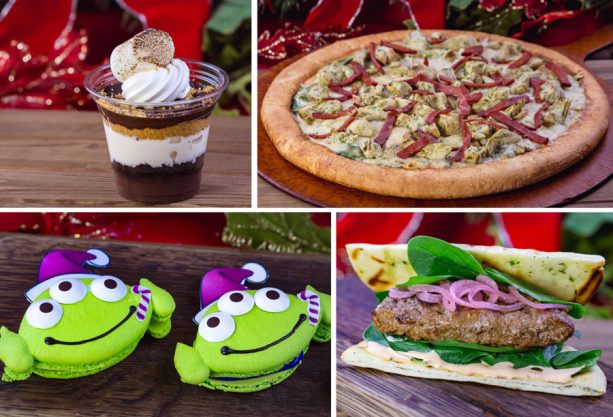 As for the sweets, there's a whole new line-up of flavored churros throughout the parks, including Gingerbread, Peppermint, Sour Apple, and Sugarplum Candy churros. The Churro Sundae — the big hit from Halloween Time — returns to the Golden Horseshoe, too.

Beyond that, I am intrigued by the S'mores Parfait — with layers of chocolate pudding, chocolate cake, marshmallow filling, crushed graham crackers, and chocolate ganache topped with a swirl of cream, chocolate chips, and a toasted marshmallow. It's at Galactic Grill and Alien Pizza Planet in Tomorrowland. 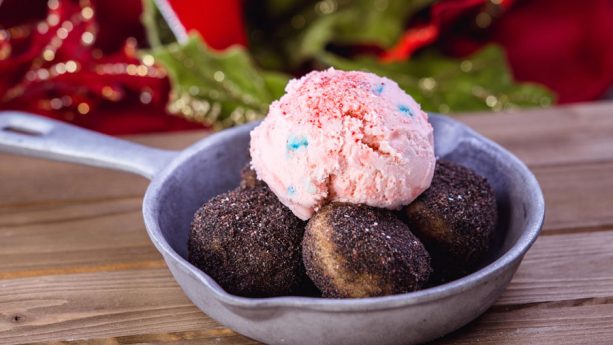 My other potential favorite on the sweets menu is a fun "Santa’s Lumps of Coal Beignets," featuring chocolate-hazelnut beignets tossed in peppermint mocha sugar and topped with peppermint ice cream. It's at Cafe Orleans.

And remember, Disney California Adventure also will be offering all its Festival of the Holidays marketplace menus, too. I will be on the lookout for the Turkey & Stuffing Tamale with Cranberry Relish, Lox & Everything Bagel Nachos, Pumpkin Soup with Maple Cashew Cream, and Shrimp and Grits with Andouille Sausage over there, too.

The holiday treats are slated to be available from the start of the Holidays at Disneyland Resort on November 9 through its conclusion on January 6.

Here is your guide to this year's theme park holiday events

I don't know. Reading about all this rich food at once is kind of making me sick. My old body can't digest this crap like it used to. The only thing that sounds appealing is the opened face turkey sandwich offered at Flo's V8 Cafe. Otherwise it's all high volume sodium, sugar and fat. Not my thing.

Your not forced to eat this SPECIAL

MENU let others ENJOY the ADVENTURE.

Disneyland is way ahead of 95% of theme parks in offering food that isn't just fast food trash. The Roast Beef, Lamb, Turkey all look legit, as do many of the Festival of the Holidays offerings. I'm not personally nuts about sweets, so I appreciate that Disneyland does try to offer selections for foodies looking for something savory, too.

Disney and Universal put a spin on reality with latest patents