Celebrating the joy of SpongeBob SquarePants and his world

November 27, 2018, 3:33 PM · The creator of SpongeBob SquarePants, Stephen Hillenburg, has passed away. He was 57 and had been diagnosed with ALS last year.

With SpongeBob's home of Bikini Bottom, Hillenburg created one of the most captivating settings for an enduring franchise in recent entertainment history. SpongeBob SquarePants debuted in 1999 on Nickelodeon and remains on the air to this day, making it one of television's most enduring franchises.

Part of the reason for SpongeBob's success was the captivating setting that Hillenburg created for the show — the underwater world of Bikini Bottom. Inspired by his experience as a marine biology teacher and longtime advocate for Southern California's coastal health, Bikini Bottom found that elusive balance between authenticity and imaginative absurdity that makes for a great theme park land... which makes the themed entertainment industry's failure to develop a fully realized Bikini Bottom land one of its more frustrating misses of the century to date.

While SpongeBob enjoyed great success on Nickelodeon, as a potential theme park franchise, it got lost in parent company Viacom's decision to get out of the theme park business. SpongeBob featured in several kiddie attractions at the former Paramount Parks, before Viacom sold those parks to Cedar Fair and they lost their Nick licenses.

Universal now has the domestic theme park rights to the character, but has limited its use to a retail store, parade appearances, and meet and greets. With its own DreamWorks Animations and Illumination Entertainment franchises to develop, Universal probably isn't going to build Bikini Bottom... unless that fourth gate at Universal Orlando turns out to be way bigger (or more sharply focused on animation) than we've thought. 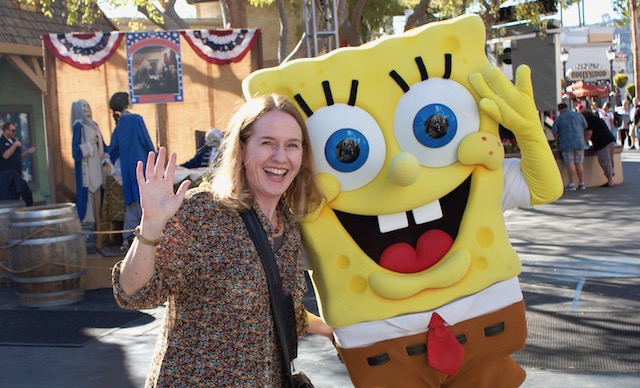 SpongeBob SquarePants is defined by his unbridled joy, enthusiasm, and optimism. His uncynical view of the world challenges us to set aside ours for a moment and just enjoy the pure bliss of imagination at work. Can there be any better result for a theme park attraction than that? SpongeBob and theme park fans don't just want to spend time in Bikini Bottom. We need to.

Hillenburg and his amazing world deserved better than what the industry has given them. And SpongeBob's fans do, too.

I seem to recall that Universal had Spongebob on a survey a few years ago. Never say never, but I think that Universal has considered it and It's ship has sailed. I think many logic defying elements of the show might be difficult to create in an immersive space, but if they did it I think it would be best to make an indoor environment ala Tritons kingdom at Disney Sea.

I always thought SpongeBob would have worked in the Kid Zone since they already had the gift shop ready. Can you imagine how many kids would have been excited to eat in a real-life Krusty Krab?

Mr. Hillenburg's contribution to animation will never be forgotten, especially to those of us who grew up watching the show.

The Hanna Barbera/Jimmy Neutron/Despicable Me building in Florida could become anything with proper theming and a new movie. Despicable Me won't be a draw forever, no matter how long the lines are currently.

Completely agree James - with the run away success of the F&B from the Wizarding World, I never could understand why Universal never took advantage of creating a real Krusty Krab restaurant.

Sbongebob is one of my favorite shows, and Stephen Hillenburg was mainly responsible for that.. The show’s quality suffered after he left in 2004,and it went back up after he returned in 2016. He will be missed, and his legacy will live on.

Universal doesn’t own the theme park rights exclusively. Nickelodeon Universe at the Mall of America in Minnesota has a Spongebob Roller Coaster, as well a costumed character and a bounce house with SpongeBob’s pineapple house on top. The coaster at Mall of America is fun, but the coaster itself isn’t better themed than a DC themed coaster at a Six Flags. A dark ride would be fun, but anything more at this point would probably be overkill for an amazing show, which is still popular, but its peek in popularity was about 2000-2005. Either way, it would be a shame if it doesn’t get a more immersive ride/attraction, but the clock is ticking.

What is your favorite part of the holidays at theme parks?