Chris Pratt joins a cast of hundreds for Disneyland's 'Candlelight'

This is Disney's original Candlelight processional, dating from the opening of the park in 1955. Unlike the nightly production at Walt Disney World's Epcot, the Disneyland original remains an exclusive affair, playing just four shows across two nights on the first weekend in December. And there are no seats for the public — Disneyland's Candlelight is an invitation-only production.

That doesn't mean that park guests cannot enjoy the show. Hundreds of guests crowd the perimeter of Town Square in designated standing-room viewing areas, while thousands more watch the processional of the choirs down Main Street USA in advance of the show. (Pro tip: If you want a shot at the SRO viewing in Town Square, skip the first show and aim for the second. People rope drop the park at 8am for space at the 5:30 show. Once Disney clears the area after that show ends around 6:15, hover for the SRO space when Disney opens it around 7pm for the 7:45 show.)

I was fortunate to be invited by Disney to attend last night's second performance in the Town Square seating area. The show begins with a live orchestra performing an overture of holidays songs, as the choir proceeds down Main Streets. As they enter Town Square, we hear the 600 voices for the first time, as the orchestra accompanies their procession on to the stage, illuminated by their candles and the Star of Bethlehem on the Main Street train station. 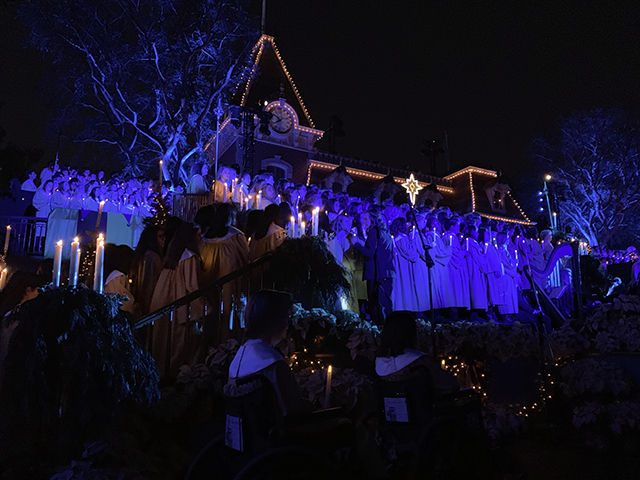 More than a dozen local school, church, and community choirs joined singers from the Disneyland and Walt Disney Studios cast. The program includes all the greatest hits of the holiday choral repertoire, including "Away in a Manger," "Angels We Have Heard on High," "What Child Is This?" and "Silent Night," interspersed with the telling of the Christmas story from the Bible, this year read by... Chris Pratt. 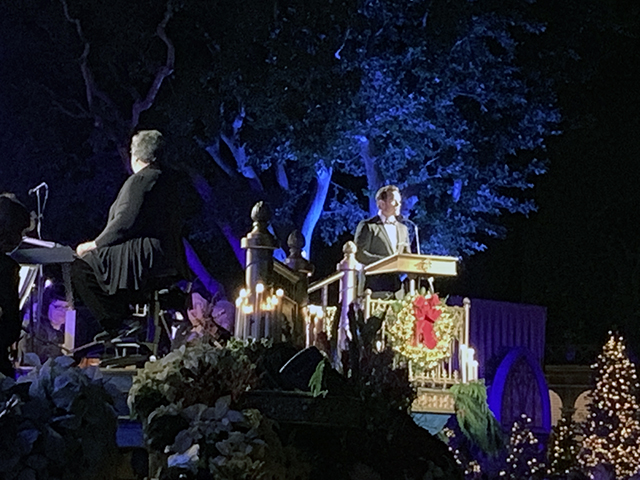 The identity of Disneyland's celebrity guest narrator is often the big mystery leading up to the show, as Disneyland does nothing to promote its Candlelight in advance of the performance, given its invitation-only nature and extremely limited opportunities for public viewing. So the introduction of the star of Guardians of the Galaxy brought a roar of surprise and approval from the crowd listening on Main Street.

Frankly, though, Pratt is not the star of this production. (Sorry, Star-Lord. Doesn't mean we don't all love you, anyway.) The stars are the hundreds of musicians who deliver an amazing testament to the power of live music to rouse the soul. 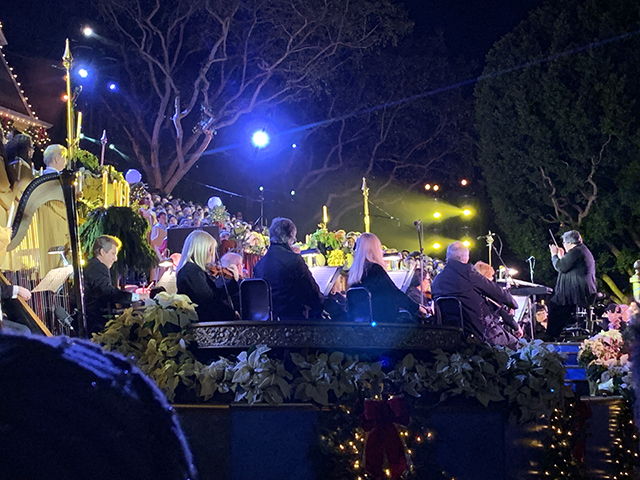 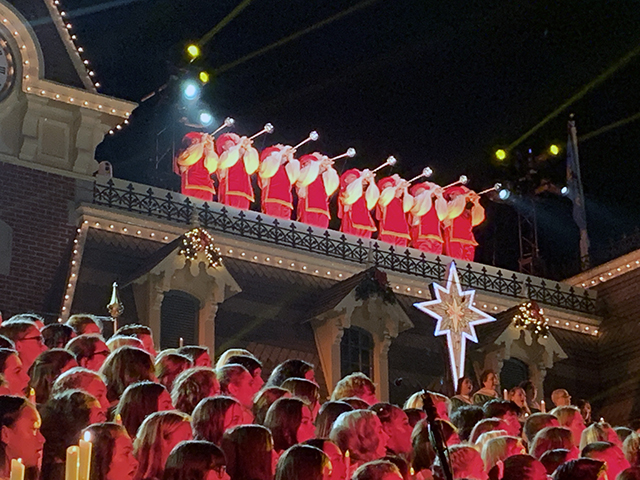 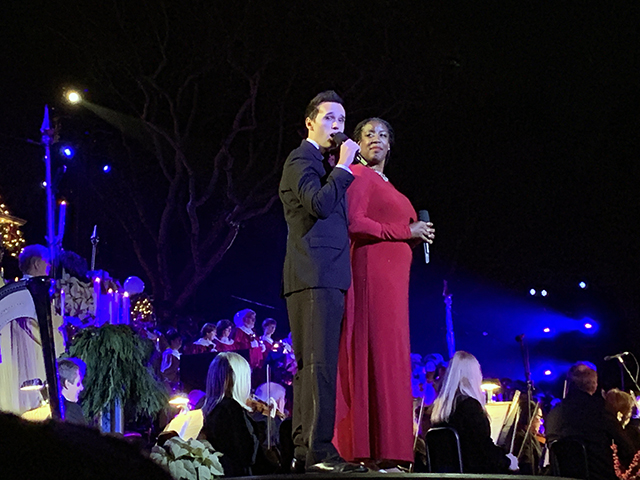 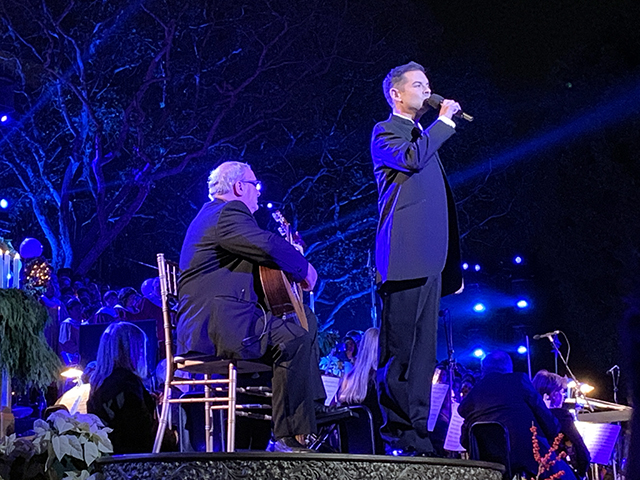 Even the audience gets to join the production, singing along to "Silent Night."

But the highlight was the finale, when nearly 700 musicians joined to perform the Hallelujah chorus from G.F. Handel's "Messiah."

That moment of silence before the final chords? Chills. I loved this work as a choir geek growing up and continue to adore the power and spectacle of it performed live. And with nearly 700 musicians performing it at Disneyland? Amazing.

Pratt followed the curtain call with some clearly heartfelt words, referencing his own recent fatherhood to talk about his new-found appreciation for a father's love.

"The love that I feel is so pure, and unending," he said. "The more we love our children, the more we understand the capacity to which we our loved by Father in heaven. That should give us a great deal of comfort and hope. Let's embrace every one of our tomorrows with hope and love. And through this holiday spirit may we continue to spread peace and goodwill throughout the world.

"Thank you, and Merry Christmas!"

This is really an astounding event. Having watched both a full-length video of this year's Candlelight Processional on YouTube, and the Wonderful World of Disney holiday special, it's amazing how I was moved by this event. That's what truly live performances, performed in one take, will do. Kudos to all the amazing singers and that tremendous orchestra.

I was there when the guest Speaker was James Earl Jones, they had a live Christmas Tree,and choirs of schools, and churches, it was so beautiful, and every guest had a candle and we sang several Christmas songs and the lights were turned off, then James Earl Jones read the Christmas Story, there was not a dry eye there and everyone had the respect to not talk, it was amazing.

So cool that you were able to attend this event! The talent involved and the scale of the production must have been truly outstanding to see live.

Most incredible event ever

It is an extraordinary event. In previous years I have been able to seen it. But currently it is simply another way to remove the regular guest from the magic of Disneyland.

It was an amazing event and I am very grateful to have been able to attend both shows Sunday night. Chris gave a great reading and his personal message was inspiring. I hope more people can attend in the future!

We were lucky last night and got bench seating after waiting six hours and making the very last show over the two days they do it. Indescribably magnificent!

Made the second and last show last night. Indescribably magnificent. Worth the six hour wait.

What a beautiful performance. This is a tribute to your heavenly father and the son, Jesus, who he sent to save your eternal soul. God bless you this Christmas and in the coming New Year. May you find illumination!

Which American cities that don't have theme parks should get one?