What's the one roller coaster than no theme park wants to have?

February 22, 2019, 11:29 AM · One of the core lessons in the theme park business is that new attractions drive attendance. That's why parks invest millions of dollars in fresh roller coasters, dark rides and water attractions — to keep fans interested in continuing to spend money to visit. And ideally, to attract new fans to the park.

But there can be a downside to expansion. If a new attraction is too good — and too far away — it can actually decrease attendance to a theme park.

The classic example of this phenomenon is Universal Orlando's Islands of Adventure. After Universal announced in May 2007 that it would build The Wizarding World of Harry Potter, the park's attendance started falling, down from 5.4 million that year to 5.3 million the next, then 4.6 million in 2009, the year before Potter opened. Attendance rebounded to 5.9 million in 2010, after the land opened in June, with attendance soaring to 7.7 million in the Wizarding World's first full year of operation. Today, the park attracts nearly 10 million visitors a year.

But that drop — as fans postponed their trips to wait for Potter's arrival — chilled the industry. Sure, a global recession didn't help things in 2008, but the 2009 and early 2010 drops were all on Universal.

Granted, The Wizarding World of Harry Potter was an industry-changing hit, and Universal's new ownership within Comcast has given the Universal Orlando Resort the support and stability it has employed since to continue to grow. But how can a park have it both ways — to develop potentially game changing new attractions without leaving themselves vulnerable to potentially crippling attendance and revenue drops during construction? 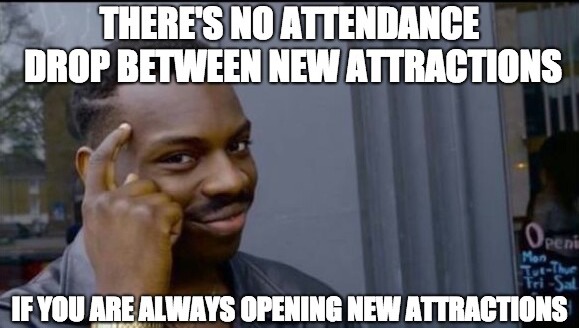 This is why Universal Orlando doesn't take years off anymore. In between the opening of The Wizarding World of Harry Potter - Diagon Alley in 2014 and this June's Hagrid's Magical Creatures Motorbike Adventure, Universal gave fans Skull Island: Reign of Kong in 2016, Race Through New York Starring Jimmy Fallon and Volcano Bay in 2017, and Fast & Furious: Supercharged last year.

Universal Studios Hollywood managed to keep its attendance rising each year during the construction of its Harry Potter land by adding a Despicable Me themed mini-land, a year-round The Walking Dead maze, and enhancements to its Studio Tour. And Disneyland has been fighting a Potter-style drop before the opening of Star Wars: Galaxy's Edge with seemingly non-stop themed festivals, including last year's Pixar Fest and this year's Get Your Ears On - A Mickey and Minnie Celebration.

Theme parks learned from Islands of Adventure in the late 2000s that you cannot give fans an excuse to postpone a vacation. Instead, parks have to program aggressively when a major new addition is coming so that people continue to visit in the meantime, in addition to planning that can't-miss vacation when the Big New Thing opens.

This need to be adding attractions continually can widen the divide between the leaders and the followers in the theme park industry, as developing and opening new attractions each costs ridiculous amounts of money. Disney and Universal can afford to do this, which helps them to widen their lead over regional theme and amusement parks that have to stick to more traditional development schedules.

But even the smaller parks are doing what they can. That's why everyone, it seems, runs a food festival now, as all parks look to grow attendance in shoulder seasons. That's also why Six Flags pushes its new membership programs so much. By tying people into a never-ending membership plan, parks can protect against not just bad weather but also the promise of better attractions tomorrow from keeping people from paying for their visit today.

For an industry built on thrill rides, theme parks hate riding the revenue roller coaster. They would much prefer a nice, boring flat ride experience for their attendance and revenue reports... though one that always runs uphill.

>>>The classic example of this phenomenon is Universal Orlando's Islands of Adventure. After Universal announced in May 2007 that it would build The Wizarding World of Harry Potter, the park's attendance started falling, down from 5.4 million that year to 5.3 million the next, then 4.6 million in 2009, the year before Potter opened. Attendance rebounded to 5.9 million in 2010, after the land opened in June, with attendance soaring to 7.7 million in the Wizarding World's first full year of operation. Today, the park attracts nearly 10 million visitors a year.

This is also known as "The Osbourne effect", after Osbourne Computer went bust following buyers cancelling orders for the current computer they were selling, in favour of an unreleased subsiquent model

There is still the problem of too much of a good thing and/or over-saturating the market with products that don't move the needle. Apple has started to find this out as consumers have learned that they don't need to purchase the newest model iPhone every single year. Apple's success in the market was based on the endless lines outside their Apple Stores for customers wanting to buy the newest model the day that it was available. There's still a high level of demand timed around their new product releases, but consumers figured out over the past few years that increases in technology weren't worth an annual investment, and have delayed their upgrade frequencies from every year to every 2-3 years. In fact, some consumers have seen the patterns of Apple's releases to understand that it's more economical to purchase the previous model phone (occasionally with updated chip sets and new finishes) in lieu of the fanciest, most expensive new release in additional to altering their upgrade frequency beyond the every year Apple would prefer.

Just giving consumers more of what they want is not always the answer, and I think Universal may have been seeing some of this over the past few years with the additions of Fast and Furious, Kong Skull Island, and Jimmy Fallon. Those attractions, while new, were not the "must see" additions that draw guests to the parks. While the prospect of having a new HP attraction around the corner might cause some guests to delay a visit by a year or 2, those recent additions won't necessarily drive attendance enough to make that big of a difference. Simply adding new attractions year after year is not enough, they must be quality attractions that give guests a reason to visit every single year.

That's where Disney has a distinct advantage over Universal. DVC by its nature is a built-in excuse for guests to return to WDW year after year after year. DVC owners paid for their points, and pay annual fees to be members in DVC. Money is always going to be one of the biggest motivators, and when you have tens of thousands of families that have essentially already paid for a trip to WDW (or other DVC resort location), those guests are not simply going to throw it away. Disney could stop building new attractions for over a decade and likely not see any decline in attendance simply because of DVC. If Universal Orlando ever wants to get on the same level as WDW, they will have to find some way to replicate the loyalty and repeat visits that Disney has been able to create through DVC.

I think the festivals and other events have helped to draw guests to parks during the slower times of the year, but have little affect on generating return visits outside of those that are already visiting frequently - My own personal theory is that they simply give guests a reason to alter an annual/semi-annual trip that used to occur during the summer to a less crowded time of year that has the advantage of shorter lines plus the draw of the festival/event. You don't hear guests planning once in a lifetime trips to WDW explicitly for the EPCOT F&W Festival or to DL for the Get Your Ears On Celebration. Those events and festivals are drawing already frequent visitors/fans to perhaps come an extra time or to shift their routine visit to another time of the year.

I think the one festival that may not fit the mold will be WDW50, which Disney has started to hint at, but has not disclosed what exactly will happen. I'm personally struggling a little bit with whether to take another trip before 2021 (last visited in October '17, and typically visit every 2-3 years) or to just wait to see what WDW50 will hold. Again, however, I think in general these seem to impact fans and frequent visitors more than the general once every 10 years or once in a lifetime visitors.

I think this is precisely why we often see Universal breaking ground without giving the public any official announcement about what they're building and when it's going to open. On the other hand, people continue to pack into Disneyland even with the looming Star Wars land, just around the corner.

Well .... I'm delaying my trip to CP until next year for the 150th anniversary, and a hopeful new coaster.

Will the Gwazi RMC convert have a similar effect on people coming here? Maybe not, as most tourists who visit BGT aren't true enthusiasts like most of us on this site.

It's a good thought provoking topic though Robert, and the ultimate slow down before something new opens, could well be the proposed new Universal park ??

.... and as we've seen/heard, bookings have slowed somewhat at Disney before the GE opening at DHS in the fall. Although you would never believe that when you go in to the Magic Kingdom :)

Disney resorts occupancy is actually up, attendance is up and per caps are way up, so no, those of us working here can definitely confirm there's no slowdown at all at Walt Disney World Resort.

Huh. I thought you were just going to write "BOOMERANG" and leave it at that.

Cedar Point offers new tastes and treats for its 2019 season