March 28, 2019, 5:01 AM · That huge new parking garage going up next to the Mickey and Friends parking structure at the Disneyland Resort now has an official name — Pixar Pals. And Disneyland officials are sharing their target for an opening date, as well.

Disneyland officials say that the garage is on track for a late July opening but that they are working with their contractors to try to push that opening to late June. The new Star Wars: Galaxy's Edge land opens at Disneyland on May 31, but only on a reservation-only basis. The land opens to all Disneyland visitors on June 24, and resort officials would love to have the new Pixar Pals parking structure open to accommodate them by that date... or at least as soon after that date as possible. 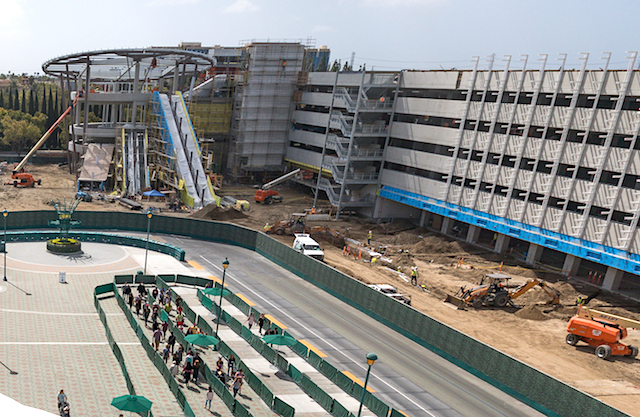 The names for the six levels on the Pixar Pals garage will be:

(All of this information was provided to Theme Park Insider by senior Disneyland officials in a private presentation to five news outlets last week. The information was given under embargo until 3am PT today.)

In addition to the expansion next to Mickey and Friends, Disneyland will add 2,150 public parking spaces by converting its Katella Cast Member Lot to public spaces in the Toy Story parking lot. That will become the Bullseye section of the lot, which also will be adding restrooms and a security screening, to take some of the pressure off the often-crowded Harbor Boulevard entrance to the resort.

With security screening available at Toy Story, visitors who ride that shuttle will be released into what will be designated part of the secure area at the resort, leaving only those walking in from area hotels to use the new security lanes on the east side of the esplanade. However, Disney officials say that at certain low-demand periods, it might close the Toy Story lot security and just send everyone through the east side security lanes, as they do now.

With the completion of Pixar Pals and the public expansion of the Toy Story lot, Disney will have added a net 5,300 parking spaces at the resort, as well as 16 new toll lanes, and between two and three new parking entrances, depending upon whether Disney utilizes the Katella entrance for Toy Story, which it will do on some days.

As for cast parking, Disneyland cast members now will move into some of the public parking areas, including the Pumbaa lot, as increased capacity now allows for the resort's cast members to park closer to their work locations.

Follow the links below for more of today's "Project Stardust" news from the Disneyland Resort.

Disneyland will use a virtual queue for Galaxy's Edge

Just tell me where the Itchy Lot is - I can't find my car.

If this were in Seoul, would it be called a parking Lotte?

Is that the joke you're talking about?

I wondered how they selected which Pixar films to include for the parking levels names?

Box office / popularity is the obvious first choice, but it would've been cool to maybe have the top level be "Up".

Sorry Good Dinosaur......always on the outside looking in, lol.

This all sounds fine, but the thing they really need to do is have enough parking lot trams. I haven't parked at Mickey and Friends for a long time, I park at Toy Story, have the waiting times for the trams improved? The trams and buses need to come one after the other, it's really inexcusable when huge crowds are left waiting for trams at the end of the day.

Disneyland will use a virtual queue for Star Wars: Galaxy's Edge