September 3, 2019, 11:56 PM · With Ghostbusters, Universal's Halloween Horror Nights is trying something relatively new — a maze based on a film that's more comedy than horror.

"When we started doing this in 2006, we were primarily focused on slashes," Creative Director John Murdy said this afternoon as we toured the maze under construction on the New York streets of the Universal Studios Hollywood backlot. "We did Freddie, Jason, Leatherface, Michael Myers, and that's how we defined our brand.

"But a funny thing happened over the last 14 years. It also encouraged us over the years to branch out and try different things. I started doing music ones with Alice Cooper and Black Sabbath, and then Slash and all of that. We did original Latino myths where we did La Llorona and El Cucuy. So we're always looking for ways of branching out. When this came up in conversation with Sony, it was honestly something I hadn't thought of before. In however many mazes that we've built - 70 or 80 - we we've only done comedy once or maybe twice. We did This is the End. We did From Dusk till Dawn, the TV series, which was kind of comedic.

"We knew it was a big anniversary this year for Ghostbusters... so when we really started to think about it, it was like, well, there's terror dogs, and there's the library ghost, and we started going down the list. And we're like, actually, there's a lot of cool stuff in this movie. And then we wanted to branch it out and do at least Easter eggs for Ghostbusters II and also the 2016 Ghostbusters movie."

Murdy took us through the maze (so bail now if you want avoid spoilers), which will get the show started with Louis Tully in the queue, who will be asking fans in the queue for help finding the Key Master. It'll be part of Murdy's annual Twitter giveaways, where fans who say the password that Murdy posts each evening to the @HorrorNights account may be rewarded with a prize — in this case, one of Louis' accounting firm's business cards.

The facade of the maze will be the familiar firehouse headquarters for the Ghostbusters and will open with Janine Melnitz' desk in the lobby. 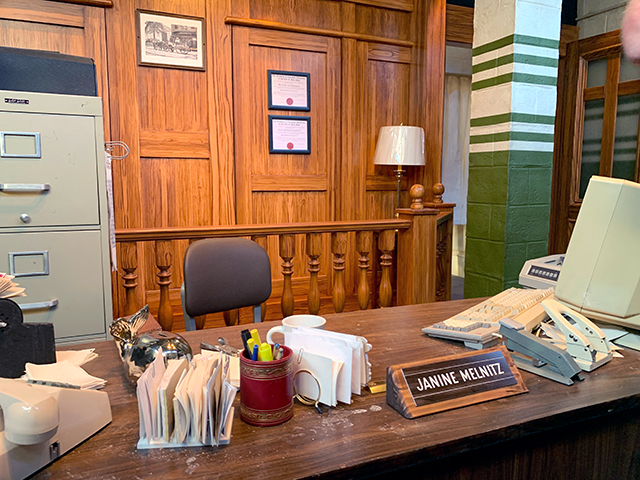 "With Janine, we're giving the performer the ability to decide what dialogue to trigger based on what's going on in the room around her. So this little box is going to be attached to her desk, and with it, she can sequence multiple tracks of audio. So sometimes it'll be the phone ringing, 'Ghostbusters. What do you want?' Sometimes it's for the EPA walking in, and she's like, 'Excuse me, Where are you going?' Other times, it's the longer call with Dana where she gets the first job or the hotel, 'We got one!'"

"While she's doing that - and it alternates - you'll see Egon bust through that door, and he's carrying one of the traps. He's just caught one of the [ghosts], and he's bringing it into the containment chamber. So that's a prop that has a tiny little mini fogger inside it, so it's smoking. And he comes busting through one door and exit through the other door. Sometimes it'll be Winston. So we mix it up, you'll see different Ghostbusters, depending on when you go through the maze."

The next scene takes visitors into the Ghostbusters' containment chamber. Not just past the chamber. Into it. 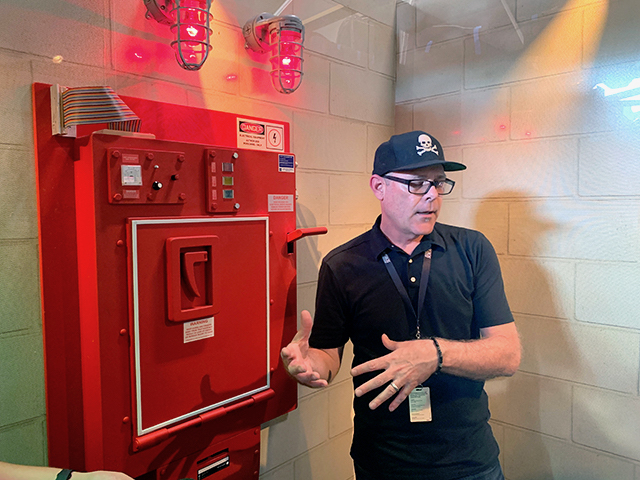 "I thought it was a funny idea. And what I also liked about it is it would allow us to get out of the real world and into the spirit realm," Murdy said. So taking inspiration from the Ghostbusters video game, with its portals between the physical and spirit worlds, the containment chamber scene sets up just such a transition.

"As soon as we come in here, everything's going to hell - the lights are going off, the sirens are ringing," Murdy said. "Then this is what we call our disappearing room effect, which we first did in Insidious. It's a photograph of our set that's printed on to perforated material, like a bus graphic like you see with these big movie posters. It's attached to plexiglass, and on the other side - you can't see right now with the lighting - there's a UV graphic that we shot and created of all these ghosts hovering all over the place - it's emulating the ghosts in Ghostbusters 2016 that were in the mirrors. If you saw that scene, in the Mercado Hotel, there was all these ghosts trapped in the mirrors."

"So we did our own film shoot and then we created this. So as this thing looks like it's blowing up, it all disappears, and you're seeing into the spirit realm."

Inside the spirit realm will be more of Halloween Horror Nights' traditional jump scares that wouldn't otherwise have fit inside the Ghostbusters story. Here again, though, Murdy and his team have created a reward for dedicated Ghostbusters fans with a series of scares featuring the Scoleri brothers, Tony and Nunzio.

Plenty of other ghosts will appear in the blackout hallways, including the famous Slimer. A return to the practical world brings us into the library, where performers will push card catalog drawers out at visitors and the library ghost will appear in a Pepper's Ghost effect.

The next scene brings us in front of the Ghostbusters hitting a ghost with their proton packs, but the ghosts get their revenge as Slimer attacks us one more time. 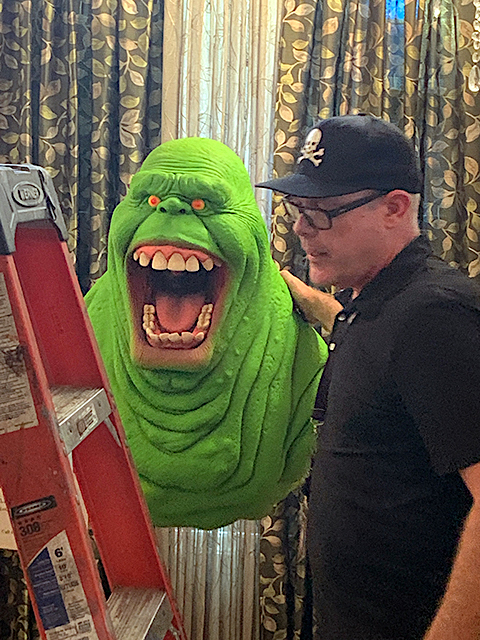 Then we enter Dana's apartment, where we first run into the terror dogs. 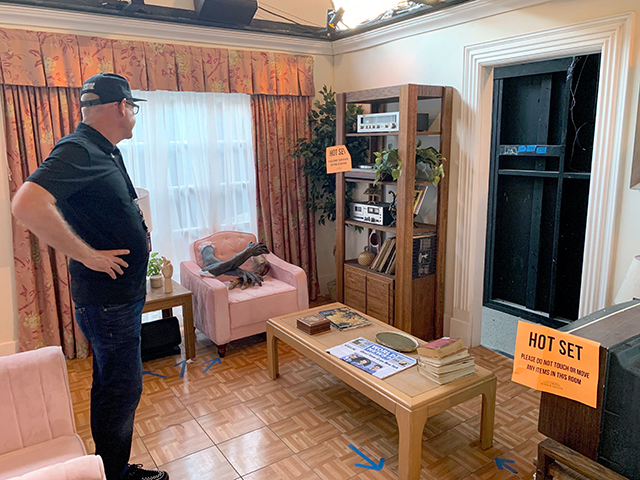 Several terror dog puppets will attack visitors in the followig hallways before Gozer takes her shot. Then, of course, it is time to choose the form of the Destructor.

I knew what was coming next, but even I was taken by surprise by the Stay-Puft Marshmallow Man that filled the next scene. At nearly 20 feet tall and 15 feet wide, Murdy said that this might be the largest figure in Halloween Horror Nights history.

We couldn't take photos of this scene, as the Marshmallow Man's face will be a projection effect. But all four of our Ghostbusters are there in full scale, too, lighting up the Destructor with their proton streams. It's an amazing scene — certainly among the most visually compelling I've ever seen at Horror Nights.

Update: I found the scene from the original Ghostbusters film. In the maze, the scene design has you looking up behind the Ghostbusters as the chest and head of the Stay Puft Marshmallow Man looms over them on the roof, but otherwise is this is the same moment that you will experience in the maze. 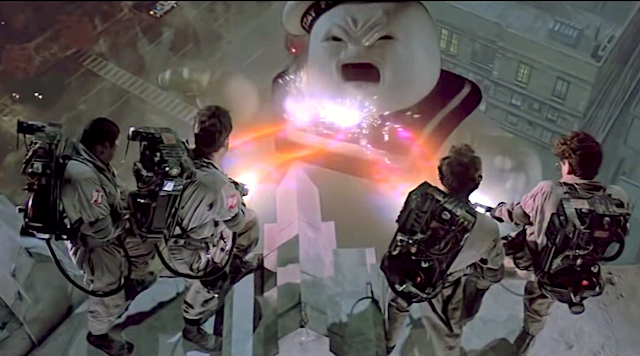 I also have posted from inside the Killer Klowns from Outer Space and Creepshow mazes on our Instagram page, though Murdy did not accompany us through those.

We got a first look inside the #Creepshow maze for #HalloweenHorrorNights @unistudios yesterday! Who’s ready to revisit this #horror classic? #universalstudios #halloween #themeparks

Darn you Robert!! I tried so hard to resist since I'm going on the 27th and didn't want anything spoiled but couldn't help it. Read the whole thing and now I can't wait even more. At least I'm going to Orlando so maybe it will be slightly different but if not that's ok. I'm just too excited to not read everything about HHN.

Seriously, though, have fun... and I will be posting a review of HHN Orlando late Friday night/Saturday morning, so stay tuned for spoilers from there... if you dare read them, of course.

I am looking so forward to this maze! Ghostbusters is what is bringing me to my first HHN ever and I can’t wait. The detail in the few pictures is amazing to see by someone whom is as big of fan as I am! Universal really does go above and beyond bringing you into these different worlds and making it so real even though this is a temporary event. Now we need to bring back the franchise permanently with a new ride! Can’t wait to get back to Orlando in less than 3 weeks!!!

Just for some context on what others have done with the franchise, here's my on-ride video for the Ghostbusters shooter ride at Motiongate Dubai.

Yes, it's time for Disney to rewrite its Spaceship Earth

Disney World looks to reopen as usual on Wednesday