The 'Six Swans' are swimming at Efteling

September 5, 2019, 12:04 PM · Dutch theme park Efteling has taken delivery of the first of its "Six Swans" that will animate the newest scene the park's Fairy Tale Forest.

Called in Dutch Sprookjesbos, the massive walk-through attraction is the heart of Efteling, which is a two-time winner of our Theme Park Insider Award as the world's Best Theme Park. The "Six Swans" will be the 30th fairy tale in the forest and will open to the public on September 28. 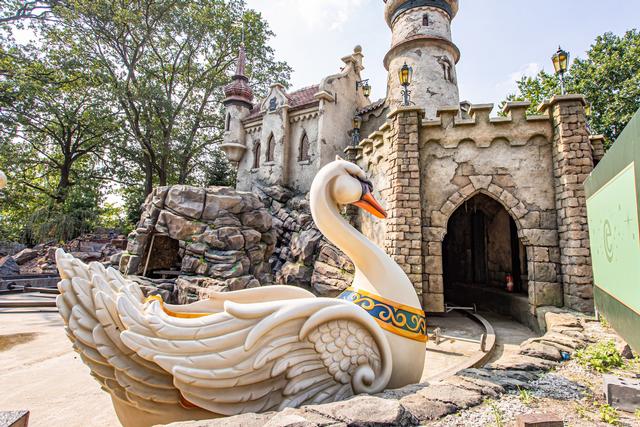 The first of the Six Swans has arrived. Photo courtesy Efteling.

While many of the fairy tales are represented by detailed installations, some stand as attractions unto themselves, including shows employing animatronics and even Pepper's Ghost effects. And there's this.

Love all the rides and the decoration, but this might be the most Efteling thing ever. pic.twitter.com/XXRTZvr2A5

Six Swans will become the first ride in Sprookjesbos, as visitors will be able to climb aboard the swans as they float around the castle moat.

The story of the Six Swans is one of six princes who are turned into swans by their jealous stepmother. So it's up to their little sister to break the spell by sewing six shirts from flowers, while not speaking or laughing for six years. (People who came up with fairy tales had some issues, amirite?)

Reader ratings and reviews for Efteling

It's going to be a nice little addition. Unfortunately no word on if this is handicap accessible. Knowing Efteling it probably won't.

Efteling has a webseries on their YouTube channel on "The Making of the Six Swans," with English subtitles, for those who enjoy a behind the scenes look at their newest fairy tale's development.

Saving everyone the clicks... (You might have to tap the [CC] icon to activate the subtitles.)

'Dark Arts at Hogwarts Castle' to debut in Orlando this month