September 10, 2019, 12:01 PM · The Disneyland Paris Resort today announced its festival line-up for the next 12 months. The events include a new Frozen Celebration as well as the return of the resort’s Marvel event, both leading up to the debut of new attractions based on those franchises starting later next year.

The Frozen event will include the expected themed food and merchandise for sale, as well as Frozen themed segments in Disney Stars on Parade and Disney Illuminations. But the headliner will be a new show, presented four times a day on the parade route and starring Anna, Elsa, Kristoff, Olaf, and Sven. The show also will feature dancers and acrobats on a new float.

In November, Walt Disney Studios Paris will open Frozen: A Musical Invitation in Animation Celebration. This will be an Enchanted Tales with Belle-style experience that’s part audience participation show and part meet and greet.

Eventually, the Studios park will get an entire Frozen-themed area, but Disney did not give an opening date for that.

“Guests will see the snow-capped mountain of Arendelle in the distance opposite a magnificent lake, with an attraction that will take them to the center of the kingdom. The area will also include character encounters, a new restaurant and a shop,” as Disney described the land in its press release.

The Studios Marvel-themed Avengers Campus, which was previewed in the Disney Parks pavilion at the recent Disney D23 Expo, will open in 2021, the year after after phase one of the land is set to debut at Disney California Adventure. 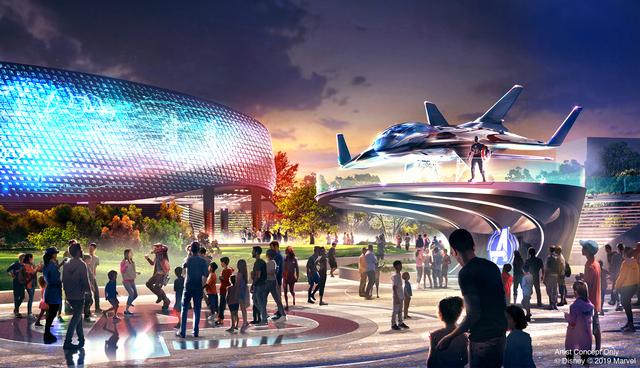 Disney’s press dump today also name checked the new Star Wars themed area that it had previously announced for the Studios park, but the company provided no additional information about that project.

At the Disneyland opening of Star Wars: Galaxy’s Edge, Disney Parks Chairman Bob Chapek all but ruled out building a Galaxy’s Edge in any of Disney’s international parks. But the Studios park in Paris has gotten severely scaled down versions of lands from the American theme parks before, as anyone who has seen WDS’ “Cars” area can attest.