Also featuring 10 mazes spread across the park, Hollywood's Halloween Horror Nights shares five (okay, maybe five and a half) properties with its sister event in Orlando this year. But separate creative teams developed the mazes/houses on each coast, so even if you are a dedicated fan who hits up HHN in both Orlando and in Hollywood, just because you've seen a property on one coast doesn't excuse you from checking out its sibling on the other.

Rather than repeating my feeble attempt to rank the houses as I did in Orlando, I've decided to group Hollywood's mazes into three tiers.

Ghostbusters — Ditching the cliche of "saving the best for last," why not start with the one maze that no one should miss in Hollywood this year? As I suggested in my Orlando review, I prefer the Hollywood installation of this house, for its outstanding pacing and use of practical effects. We start with a facade of the Ghostbusters "firehouse" headquarters, moving inside to Janine Melnitz' desk in the lobby. In both of these locations, actors interact with fans, drawing us into the personal connections that help make HHN such an amazing event.

Moving on, we reach the containment chamber in the Ghostbusters HQ, which dissolves in a wonderful moment to suck us into the spirit realm. There, we meet Slimer and a cast of ghosts from the Ghostbusters films. Throughout the maze, we transition between the spirit realm and the "real" world, including a nice Pepper's Ghost effect in the haunted library. Then we're off to Dana's apartment for our eventual confrontation with Gozer the Gozerian and, of course, the Stay-Puft Marshmallow Man, which might be one of the most impressive characters ever developed in a theme park, much less just for Halloween Horror Nights.

The Curse of Pandora’s Box — Joining Ghostbusters, Universal Studios Hollywood's two original concept mazes were the class the of field this year. Inspired by Greek mythology and set inside a dilapidated storefront that seems a bit like a horror fan's version of Borgin and Burkes, you know from the name that someone (or thing) is going to try to get you to open that box, unleashing all sorts of evil. And just like how someone always looks into Mara's eye on the Indiana Jones ride, some fool is gonna do it here, too.

The Curse of Pandora’s Box is a black light maze that offers some stunning visual sets, reminding me of Orlando's Yeti maze for their engaging quality. Filled with great effects and a compelling story, this is a maze well worth multiple visits.

Holidayz in Hell — The other original maze this year, Holidayz in Hell gets the promotion from scare zone last year. EM artist Figure scores this one, which presents a twisted take on New Year’s Eve, Valentine’s Day, Easter, the Fourth of July, Thanksgiving, and Christmas. Again, the visuals are superb and the humor appropriately dark, especially in Thanksgiving scene, where the turkey gets its revenge. Calling back to last year's production, this maze transitions into an excellent mini-scarezone at its conclusion. 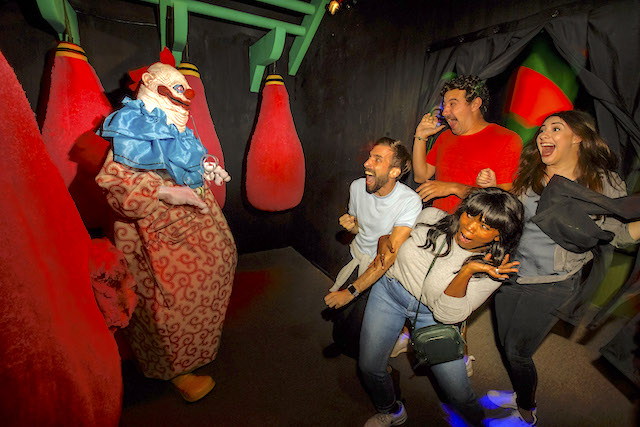 Killer Klowns from Outer Space — Inspired by the 1988 sci-fi/horror/parody classic, the Orlando version of this was more fun than I expected, and the Hollywood version delivers more of the same. Starting with an outside scene where Farmer Gene, looking for his dog, finds an alien circus instead, this maze embraces the absurd, assaulting us with cotton candy and ice cream smells while running us through a funhouse gauntlet.

Rob Zombie’s House of 1,000 Corpses — My top surprise from Orlando, this maze brings Captain Spaulding’s Museum of Monsters and Madmen from the 2003 film (shot here at USH) to life, then bringing us into the Firefly family home... and the tunnels underneath. It's also fun here in Hollywood, with some nice scares and surprises. 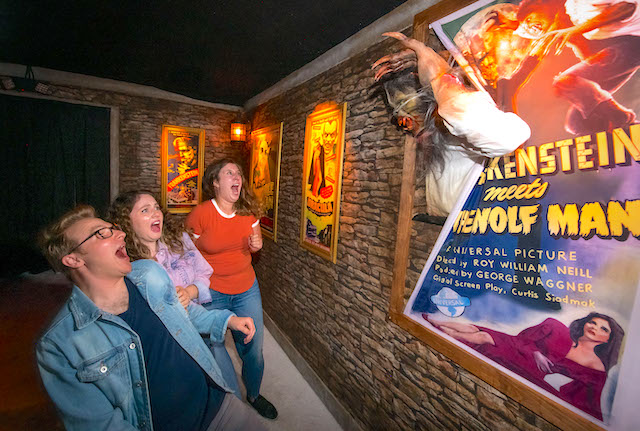 Frankenstein Meets the Wolf Man — Orlando got the full cast of Universal Monsters for its house, but in Hollywood, the focus goes to this 1943 classic. But with a soundtrack from Slash, Universal is not paying homage to an old movie here, but instead reimagining its characters for a new audience and era. Still, it's not as visually compelling as Orlando's full cast production, though Hollywood's climax is as good as anything else in the park this year. 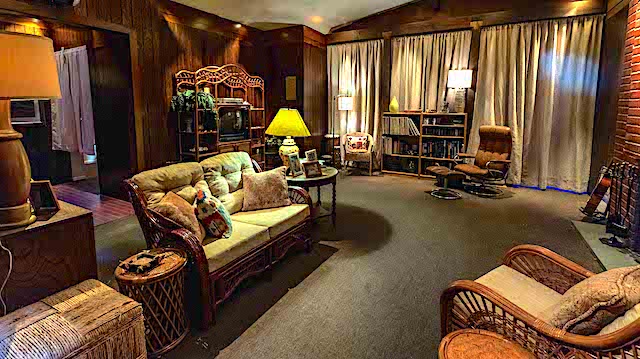 Us — This time in the home state of Jordan Peele's amazing horror/social commentary film, Us serves up wonderful production design that makes you feel like you are walking through the film, from the Santa Cruz Beach Boardwalk funhouse to the Wilson family's vacation home to the finale in the underground domain of the doppelgangers. Still, after experiencing this house on both coasts, I wonder if the source material just isn't a good fit for Horror Nights. Jordan Peele's stuff is amazingly thought provoking, but do I really want to think at Horror Nights? Or do I just want to scream and laugh? 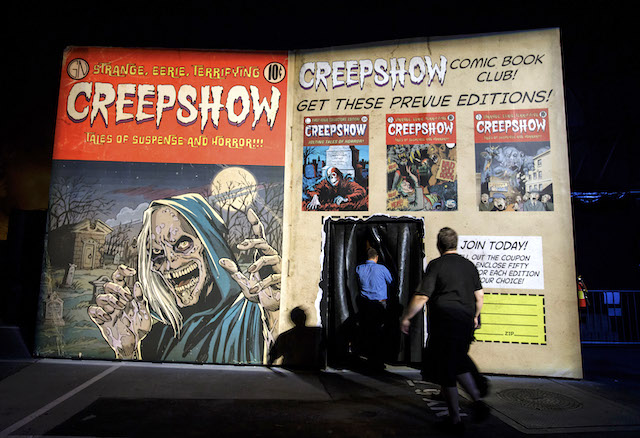 Creepshow — Reimagined by The Walking Dead's Greg Nicotero, this Creepshow includes scenes inspired by the 1982 classic as well as the upcoming Shudder TV reboot: Father’s Day, The Crate, They’re Creeping Up on You, Gray Matter, and Bad Wolf Down. It's a solid house, but just not quite up to the level of the other mazes this year. 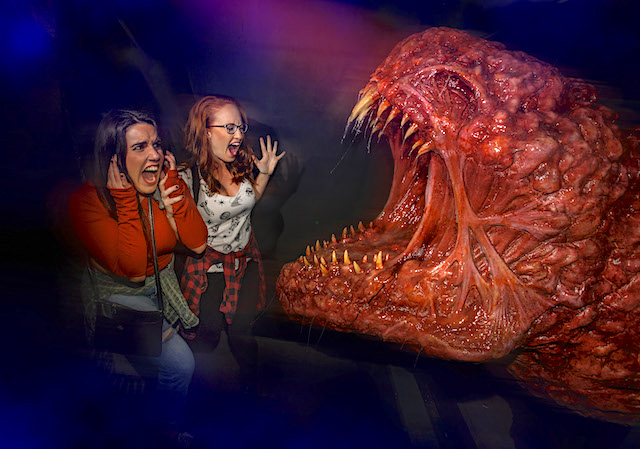 Stranger Things — This year's version of the maze inspired by the Netflix crossover hit focuses on seasons two and (briefly) three of the show. We get an excellent depiction of the tunnels from season two, but the strings holding the massive Mind Flayer puppet are clearly visible, ruining the power of what should be the showstopper in this maze. Bob gets his dying moment, but the maze would have been better off just skipping the half-hearted glimpse at season three, which gives us Hopper's cabin but no Russians and - unforgivably- no Starcourt Mall. Maybe next year?

Universal Studios Hollywood's Halloween Horror Nights also includes a plussed version of the year-round The Walking Dead maze, as well as the return of the Jabbawockeez for another edition of their dance show.

Disney unveils its Guardians of the Galaxy roller coaster trains