October 24, 2019, 4:53 PM · When Universal announced that it would build Epic Universe, the third theme park at the Universal Orlando Resort, officials declined to reveal an opening date for the park. At the announcement press conference, Universal Parks Chairman Tom Williams cited competitive pressure for not providing more details about the park.

"We are all battling for the time of visiting guests to come to our location," Williams said then. "And to, frankly, share the details of what we have in mind with the competition is something that we have no interest in doing."

Theme parks struggle with the question of when to start hyping new attractions. For seasonal parks, the answer is pretty easy — drop the news about next year's new stuff near the end of the season to give fans something to look forward to over the winter... and a reason to buy next year's season pass right now. That locks in revenue for the park during the off-season, when entertainment alternatives threaten to poach fans.

For year-round parks — most notably those from Universal and Disney — the calculus becomes quite a bit more complex. With visitors arriving throughout the year, parks need to provide information early enough that people can make plans... but not so early that it encourages fans to postpone a visit so that they can experience the new stuff on their next vacation.

Universal Orlando's attendance tanked in between the time it announced The Wizarding World of Harry Potter and the land's opening in 2010. (A global recession didn't help, but Universal's attendance dropped more than others did during that time.) More recently, Disney cited the same phenomenon for attendance drops at Disneyland and Walt Disney World earlier this year, in advance of Star Wars: Galaxy's Edge opening at those resorts. 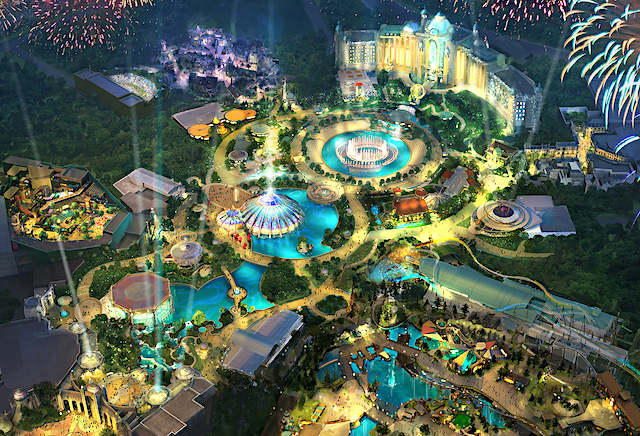 After Universal's Epic Universe announcement, I asked Theme Park Insider readers to guess when they thought the new park would open. Collectively, you guessed 2023... which turned out to be correct. Even though Tom Williams and his crew wanted to hold that news for longer, their boss Steve Burke let it slip during an investors' call this morning.

A 2023 opening made sense to many of you, given the history of Universal's prior park development. But until this morning, there was a chance that the park could open earlier, or later. That uncertainty made it difficult for anyone to plan an Orlando vacation around Epic Universe. Now, with the official word that the park will open sometime in 2023, people can start considering that when making their plans.

So, will you? Is the news that Universal's Epic Universe will open in 2023 going to change your travel plans? Are you now more likely to postpone a Universal visit, as Williams and others had feared? Or are you likely to keep visiting as planned?

Since you all were spot-on last time, let's put this one up for a vote, too.

I was planning a 2021 visit because my daughter is not tall enough for most rides, so not really close enough to postpone it another 2 years. If anything, this makes me want to plan for a 2023 visit which might not have happened previously.

EU is far enough out that it shouldn’t change a ton of people’s plans for trips in the next year or two...Someone planning a trip for next probably wouldn’t postpone it an additional three or four years, they’d probably just plan another trip after the new park opens...

I'm planning a trip to Orlando around my birthday in February, and I'm certainly not going to delay it 3 years just go to to Epic Universe. In 3 years, I can save enough to make a return trip. I'm on a budget, but it's not THAT tight.

It's been 5 years since I've been to any Orlando theme park, so I'm already neck deep in new attractions and lands to check out.

Pandora. Galaxy's Edge. King Kong. Volcano Bay. Transformers. It's a long list, so 2023 will just give my calendar a new timeframe to aim for.

My general rule of thumb is that I will delay a visit for up to a year in order to accommodate a new attraction. For example, I bumped a Virginia trip from summer 2017 to spring 2018 in order to hit Twisted Timbers at Kings Dominion, and I reworked my trip plans for 2020 since the opening of American Dream Meadowlands was a bit too late to fit into my fall trip this year. At the moment, it looks like the soonest possible opportunity to visit Florida will be in 2021, so if I'm able to do a Florida trip that year I'll go and then return for Epic Universe sometime after it opens. However, if the 2021 trip gets preempted due to work, family events, or a more enticing trip option (i.e. Europe) and Florida gets bumped back into 2022, then depending on when Epic Universe is likely to open it may be worth bumping Florida back.

We go once a year for Horror Nights so no change for us. Will just have to plan for a longer vacation in 2023 to accommodate the new park!

For the Rise of Resistance opening in December, I just postponed side trip to Galaxy Edge - from November to next trip in Feb. So, like others, I would shuffle within 6 month - 12 month time frame to see new park.

I am splitting between excitement of four "Diagon Alley" level experiences in one spot, with FEAR that admission fees will be ala carte and not included in annual pass.

This opening is so far in advance that it's not really going to change our immediate plans much. We are doing a WDW-only trip next January, and weren't planning on returning to Orlando until fall 2021 or maybe spring 2022, mostly because of WDW50 and all of the new attractions. Epic Universe opening in 2023 won't change anything for us except perhaps accelerate our next trip from 2024 up to late 2023. We usually base our trip frequency on the number of new attractions in a given region, and with an entirely new theme park opening in 2023, Epic Universe will warrant a trip on its own. However, with so many new attractions opening in Orlando/Tampa over the next 3 years, we would have more than enough reasons to schedule a trip between now and 2023 that would not be affected by Epic Universe's planned opening.

I think Universal does it right by not releasing the specifics of what they're building. People might be interested in another park, but it's hard to delay a trip when you don't know what you're delaying it for.

On the other hand I'm definitely postponing Disney trips until Rise of the Resistance is up and fully functional.

Not relevant to me. I don’t do Orlando anymore and nothing is likely to change my mind.

There is always something new coming in Orlando. Disney will have several headlining new rides by 2021, and after that they will start planning something else. Then Universal will have a whole new part in 2023. You really can’t postpone a planned trip waiting for everything to be finished.

Was already planning 2021 for GOTG Cosmic Rewind and 2023 for Epic Universe.