What's the next chapter in 'The Imagineering Story'?

December 12, 2019, 11:51 AM · For the past five weeks, "The Imagineering Story" on Disney+ has shown viewers, in unprecedented detail, how Disney's theme park attractions come to life. Tomorrow, the sixth and final episode of this documentary series debuts on Disney's streaming service, but Disney+ invited me and a few other reporters to watch it earlier this week at Walt Disney Imagineering headquarters in Glendale.

The late Marty Sklar commissioned Leslie Iwerks to do a project on Walt Disney Imagineering as she previously had done on Pixar. The original concept was to produce a 90-minute documentary film, but after years of filming and research, Iwerks and her team found themselves with a six-hour cut. Fortunately for theme park fans, while Iwerks & Co. were producing the film, Disney CEO Bob Iger was leading the push to create Disney+, proving a home where viewers could see the entire project without the draconian cuts that a traditional film release would have required.

While previous episodes of The Imagineering Story covered 10 to 15 years of WDI history, the final episode dives deep into the past five years, detailing the creation of Shanghai Disneyland, Pandora - The World of Avatar, Guardians of the Galaxy: Mission Breakout, and finally Star Wars: Galaxy's Edge. (Since this episode covers WDI's latest work, viewers who have not experienced all of these attractions should consider that the episode contains some spoilers about them.)

After the episode screened, Iwerks joined six Imagineers who "star" in the final episode on stage in WDI's Marty Sklar conference room for a discussion about The Imagineering Story.

"One of the true guideposts for us was that Walt Disney said, 'I'm going to build the happiest place on Earth,' but we said creating happiness is hard work," Iwerks said. "That's really what the story was about. For me to go behind the scenes and really talk to everybody here and the challenges that go into all this I think was really revolutionary because the public doesn't get all that information. So I certainly as a filmmaker appreciated the opportunity to tell the stories that were so real - and so inside. And I think that's what's really refreshing to audiences." 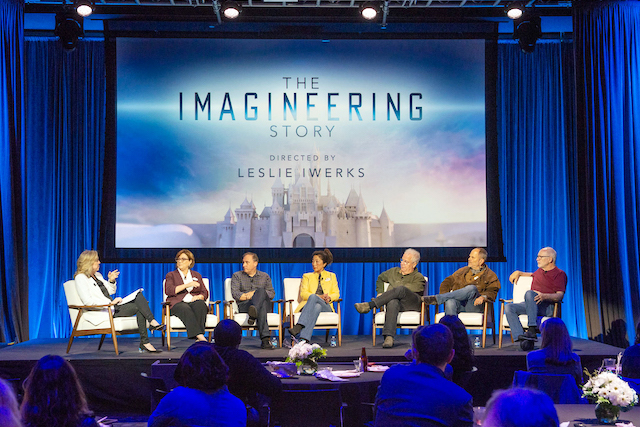 Disney long has operated under a philosophy that Marty Sklar often described as such, "There's only one name on the door. And it ain't yours." But now, The Imagineering Story has exposed dozens of Imagineers, and the process behind their work, to potentially millions of viewers. What do these Imagineers hope might be the result of that exposure?

Doris Woodward, Executive Creative Producer for Walt Disney Imagineering Shanghai, said: "I'm excited about it in the sense that the world now can dial in and see - for the one person or the kid that's interested to be an artist, or to be a writer, or to be just a conceptualist - they can actually see it's a viable business, a viable career. Especially in Asia. Growing up in that part of the world - I think it's maybe around the world - this is usual: 'I want to be artist.' 'Don't you want you want to be a lawyer? Don't you want to be a doctor?' It's the same thing. And now to be able to see that this is an honorable profession - this will tell the mothers, the fathers, and the kids: You can do it."

Nancy Seruto, Portfolio Executive Producer for Shanghai's Treasure Cove, said: "I think there's something inherent the character of everybody I see here: They're motivated, and they work in service of the project. I think that's why it's so emotional for us, because it just becomes an extension of yourself. It's almost difficult for you to think of yourself as an individual artist, because that project is a weaving of so many people. Even if the spotlight is on you, I don't think you even really own that. You see yourself as part of something."

WDI President Bob Weis said: "I think that there's an ethic here that is highly collaborative. You can't do this work as an offshore because there's too many people involved in this - too much complexity to it. So I think there's a lasting ethic that doesn't matter if the world knows about us or doesn't know about us. It's kind of nice, I think, for all of us to say, well, the world knows that we're here. Somebody did this. But that ethic of collaboration is still there, and that when we you look at a project that it's, it's the sum total of a wide field of disciplines who all connected with the same story, same passion, work together to make it happen. I feel like that's fundamental to us."

And Scott Trowbridge, now listed as Park Creative Executive for the Disneyland Resort, said: "[It's] breaking the mystery that this is not done by a bunch of elves in a garden someplace, but that it is done by people who are passionate and work hard and strive to attain some level of proficiency and some skill that all then come together to work to create these things. The idea that this is made by people who are working hard, but that out of that process comes the ability to create these amazing, magical experiences and places and characters and stories [that] can teach people - regardless of whether they apply themselves to the field of entertainment, or science, or whatever field they strive for. Really talented passionate people coming together can create the impossible and can propel the world forward. That is a great lesson that hopefully comes out of the work [Iwerks and her team have] done here - to set that example that amazing things that might seem impossible can actually be possible if you just apply yourself and surround yourselves with really smart, talented people."

Even though the series is now done, all six episodes of "The Imagineering Story" will remain available for streaming on Disney+. And we will continue to tell the story of the Imagineers, as well as other themed entertainment designers around the world, here on Theme Park Insider.

I've been really enjoying this series. Lots of cool insightful info & a look into things that "almost made it".

I never knew anything of this stuff! It also made me wish we'd gotten Westcot & Disney's Americana....

Looking forward to the finale!

Okay...the headline of this article gave me hope that maybe Disney was working on something else with Iwerks & Co. I would love to see a monthly special that gave deeper insights into happenings around the Parks. There's still so much happening that they could really dive deep into the creative process.

I was completely blown away by the high quality color film from 1954 and 1955 in the first episode. Then again with the emotional passing of Walt and seeing the emotional attachment these talented people have with there projects. Absolutely incredible series for fanboys like me!

One thing I love is how Disney never throws ideas out, just ends up using them elswhere. Best example is how the never-built Africa pavilion for Epcot was used for the Africa section of Animal Kingdom. And how several ideas for Studio projects made their way to DisneySeas. Or how it took a long while but they finally got Little Mermaid and Beauty and the Beast rides built. It's a great bit as you can imagine someone stuck on something, looking through the archives and realizing something from 20 years ago can work today. Just brilliant stuff.

Universal gets into food festivals, with a twist