February 11, 2020, 9:21 PM · Disneyland will premiere a new daytime parade, Magic Happens, this month, and the resort today invited several reporters to go backstage for a first live look at one of the parade units as well as a "talk through" the new show with two of its creators.

"This parade is made by lovers of Disney parades, of Disney entertainment, who have grown up with it, grown up through it, [and] had a chance to see audience faces on the route and know what they respond to," Show Director Jordan Peterson said.

He spoke in front of the lead float from Magic Happens, a fanciful depiction of Mickey's sorcerer's hat, painted in iridescent color and accented with 300 LED lights. 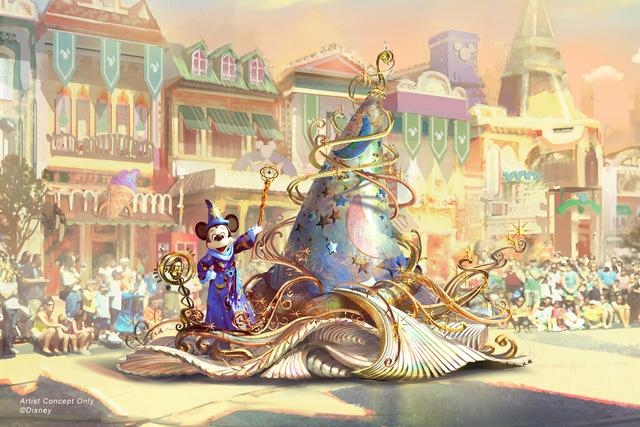 Disneyland wrapped its one-hour presentation with the lead unit's dance team, who performed to a recording of the parade's theme song. The choreography, costuming, and makeup very much present a design aesthetic inspired more by "RuPaul's Drag Race" than the "Up With People" aesthetic that has dominated theme park parades for more than a generation.

That's an intentional change of style, and not just because the parade draws upon the talent of "Drag Race" veterans such as Todrick Hall, who wrote the theme song, and David Petruschin [aka Raven], who consulted on its makeup. 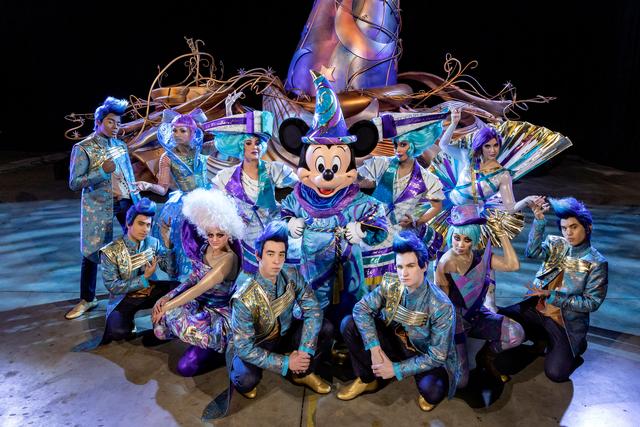 "We wanted [Magic Happens] to feel now, but at the same time still be a love letter to Disney in general. So the choreography is fresh and it's new and it's advanced, the music which is is very modern, but at the same time still touches on those classic Disney elements that makes it uniquely ours and special. But we wanted it to, in the end, kind of have this cool contemporary vibe to it," Peterson said.

"You'll see that it is very fashion forward. Stepping off the runway was the vibe that we were looking for. And at the same time the floats themselves are moving pieces of art. Our float designers are artists. They studied so many different aspects that they wanted to bring to life that each one feels like its own unique piece of art that you can present in and of itself - from music box to jewelry to sculpture design and across the board - and they really kind of pushed the envelope on what a parade float can be in general.

"And finally, and then we needed it to be whimsical because at the end of all of this, Disney magic is just that - it's whimsical, it's joyous, it's heartfelt, and at the end you should leave a Disney grade smiling, and we don't want to take ourselves too seriously throughout."

Disneyland's first parade unit devoted to Moana follows the Mickey Mouse "swirl of magic" opening unit, with LED media screens representing the ocean embedded in what was designed to look like a koa wood "frame." 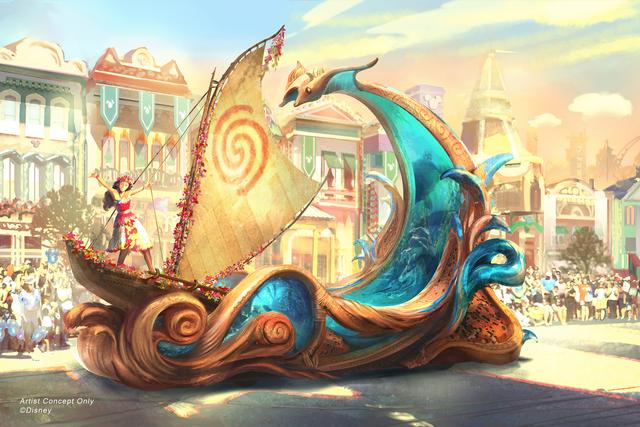 "You're going to see snippets - maybe the Heart of the Ocean comes down, maybe there's some of your favorite Disney friends that might appear in that animation. But most importantly, you're releasing the magic of the ocean, through Moana's eyes," Peterson said.

Maui follows on the second float of the parade unit, accompanies by Moana's pet pig, Pua. And trailing them are Kakamora dancers, accompanied by Hei Hei, who has his own tiny "float." 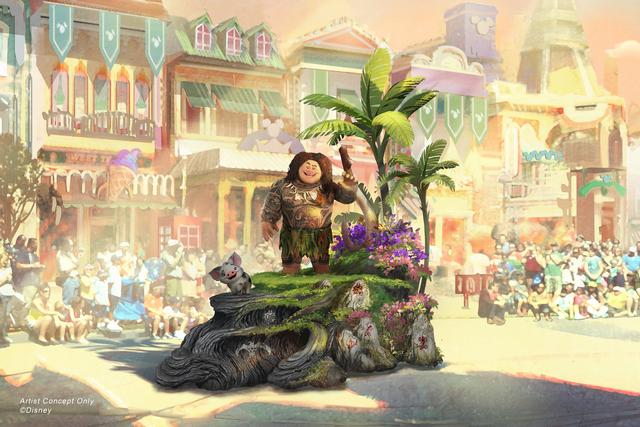 Coco follows, using animatronics and stage effects to bring together multiple elements from the Pixar film into a single float. 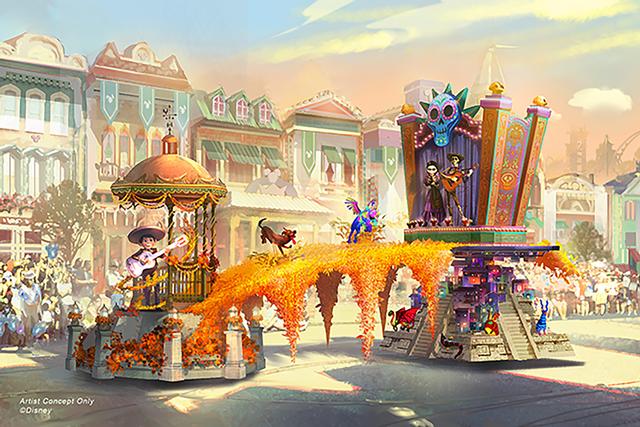 "You see Miguel playing the famous guitar of Ernesto de la Cruz right out the gate, and he's in the world of the living and as he strums that guitar, it causes the leaves to connect to the Marigold Bridge, which leads the land of the dead," Peterson said. "You see Dante, his dog, appearing in his normal form and then disappearing into the bridge and repairing in his alibrije form, his spirit animal, and then most importantly, connected forever to Miguel is Hector and the Imelda - they serve as his backup singers. They're always connected through music, their soul, their song, their family - because that's what's so important here. And you'll see the city of the dead recreated in exquisite detail by the design team - all individually lit, crafted windows and doors and wrought ironwork - it's really stunning. You'll also see, dotted across the float are the alibrije, as they watch over the different souls in the land of the dead."

Next comes the Frozen 2 float, which the Disney Live Entertainment team designed at the same time that the Disney Animation team was creating the film. 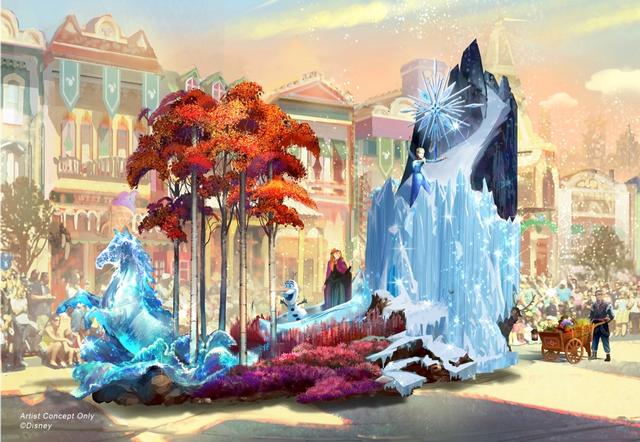 "We have some very large elements, up front, which is very different for us, you know, typically we would start low and then build to the back," Creative Director David Duffy said. "Well, we wanted a sense of discovery, so by putting something large up front, then this forest almost shields Elsa from you until the float passes by you. So again, you're discovering lots of things as this float passes by, all the way to, as it goes around back, you can see Sven, who was realized on the back as an animatronic."

And yes, Elsa will make it "snow" from the float, as well.

"In this, we wanted to tell the story of the magic makers and the moments of magic that transformed the lives of characters that we love so much. We wanted to freeze those moments in time, and we wanted to explore them as deeply as we could," he continued.

So what we get here are four more floats, each depicting a single, magical moment from their Disney animated films, starting with the moment in Cinderella when that pumpkin transforms into a carriage. 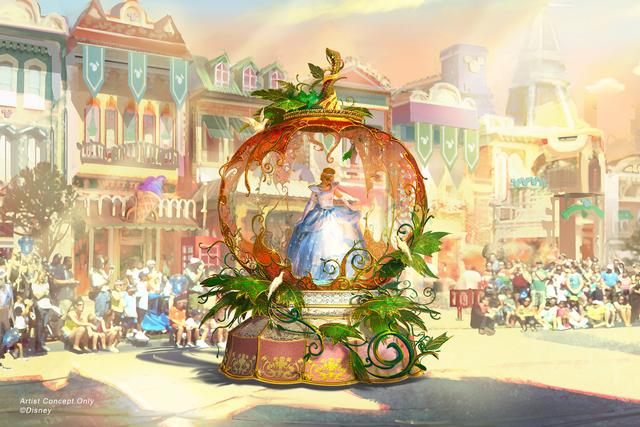 Followed by Arthur becoming a king by pulling the sword Excalibur from the stone, as Merlin (in his first Disneyland parade appearance) looks on. 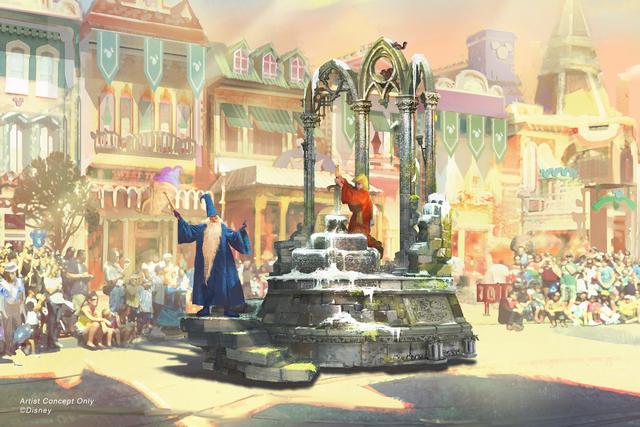 The there's the moment when Tiana and Naveen kiss, transforming back into human form. 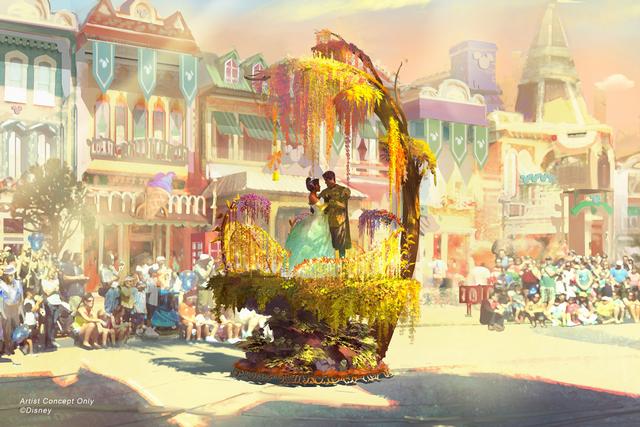 "We couldn't figure out what to make it look like," Peterson said of this float, "and David I went and watched the film like 10 more times, and we got to the scene and we're watching and we're like, 'Oh, they are literally on a float.' We made that too hard on ourselves."

Then we conclude with the finale of Sleeping Beauty, as Aurora and Philip dance while the good fairies transform her dress from blue to pink and back, again and again and again. 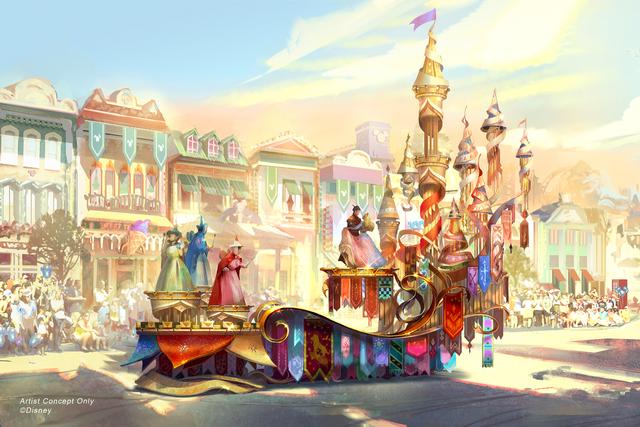 "We love the color," Peterson said. "If you go back and look at that film, you'll you'll know that there's something different about the way that it pops. And all those tapestries - you know the the tapestries that hang all over - so we know we wanted that to be an aspect. We wanted to represent the beauty of her castle, but in a brand new way, and so we think that this design approach [is] really artful and airy and beautiful."

Duffy concluded, "When we first went down this path a little over two years ago, we knew we were going to have Star Wars: Galaxy's Edge, which was of course going to be amazing as it is, and we all knew that we were going to have Avengers Campus, even though that hadn't been announced yet, so we thought - what a perfect opportunity, in this spring, right between those two, to come back with a message about our core Disney equity - our core Disney storytelling. So we're really taking advantage of all the amazing intellectual property and stories that we have the opportunity to tell here at the resort."

Update: (Feb. 12) Disney just released a new promo video that includes some of the backstage stuff we saw yesterday.

Magic Happens opens on February 28. For tickets to the Disneyland theme parks, including a limited supply of tickets at the old, discounted prices, please see our travel partner's authorized Disneyland tickets page.

Speaking of which, why was the Paint the Night soundtrack never officially released? I do hope that parade returns soon.

While I am truly excited for this new parade, I do hope that it is not too ambitious. It must have the heart component that makes you feel good when watching a Disney parade. I love that Sword in the Stone is included. Given the description, it does feel Disney, with the perfect mix of old and new.

One thing that I can't help but notice is the fact that it relies heavily on LED screens for technical aspects. I'm not certain how those will appear during the afternoon. BUT, this does lead me to think that it will be beautiful in the evening.

One final note, given the heavy reliance on LED effects, I don't see Paint the Night coming back to Disneyland anytime soon. I REALLY do not want the to bring Paint the Night to WDW Magic Kingdom. The 50th at Magic Kingdom well deserves a unique and new nighttime parade. If Disney Entertainment wanted to do the ultimate fan service, they would consider creating something along the lines of Spectro 2.0, potentially recreating some of the original costuming and look of Spectromagic. I'm certain that any of us that visited WDW in the late 80's and early 90's would love to see components of Spectromagic brought back to life in LED form.

Although the floats are small they look very nice. Maybe sack the person who designed the RuPaul's drag race outfits for the dancers?