The Disneyland Resort kicked off the event this morning with a press gathering where Culinary Director Jeremiah Balogh talked us through some of the top new dishes on this year's menu, including

As Chef Balogh mentioned in the video, Disney had made samples of the Impossible Cheeseburger Mac & Cheese available for us to sample before he spoke. I'm not a huge fan of Impossible (the fact that no one seems able to tell what the carbs per serving is raises a huge red flag for me), and a cheeseburger mac n' cheese isn't my jam anyway, so I was eager to move out into the park to try some of the other offerings.

First thing you might notice out in the park this year are the newly designed marquees above each of the 13 marketplaces throughout Paradise Garden Park, some of which are animated.

But while the plussed decor is nice, it's the food we're here for, right? Chef Balogh might have been surprised by the initial success of the chicken and waffle dish during last night's preview, but that one topped my list of things to try this year, so the fact that lots of other people apparently felt the same way didn't surprise me. 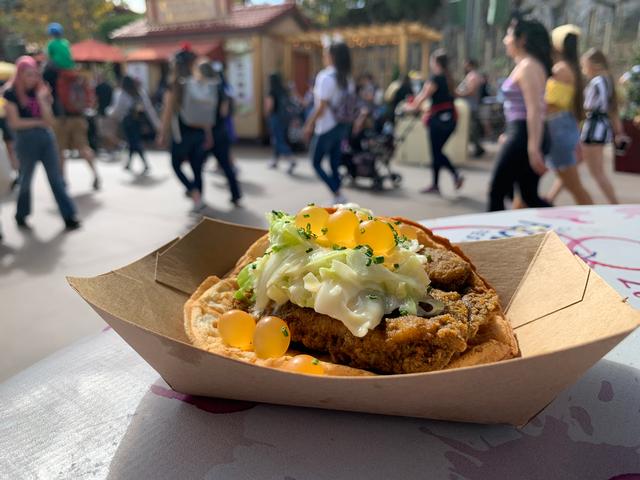 Served like a taco, the fried boneless breast portion comes topped with a slaw that was pretty much indistinguishable from a traditional cole slaw to me. But it was those OJ bubbles that provide the real pop. Tasting a bit like a Creamsicle, the bubbles took over the sweet role typically played by maple syrup in this otherwise savory dish.

It's... different, and perhaps I would have liked it, but the chicken and thin waffle just didn't bring enough flavor to the dish to complete the bubbles, which just dominated the overall taste of the sandwich.

Not having the stomach space to try more than a few items today, I decided to head over to the Paradise Garden Grill, where I almost never have a bad dish during DCA's seasonal festivals.

And today was no exception. I ordered sample sizes of the Brisket Fries and the Fish Taco. 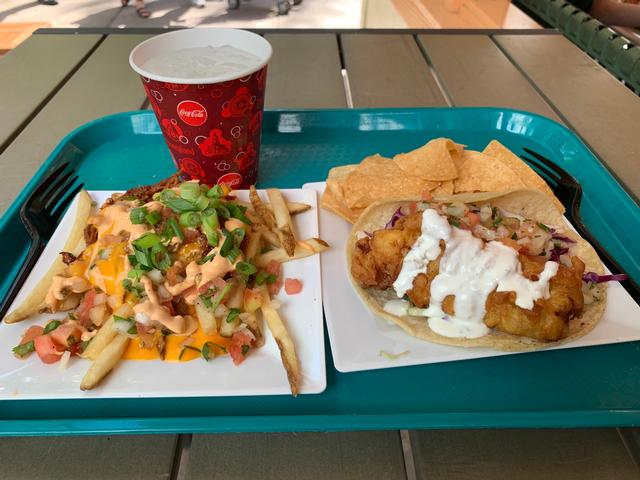 Disney again is selling an eight-selection Sip and Savor Pass to the festival, this year for for $56 ($51 for Disneyland annual passholders). If you use the Sip and Savor Pass at the Paradise Garden Grill, you get "sample size" versions of its entrees, which are about half the size of the regular selections.

But these are still hefty portions that together completed a full meal for me. The taco featured a large serving of beer-battered cod topped with Pico de Gallo and Yogurt Crema, while the fries came loaded with shredded barbecue brisket, cheddar cheese sauce and more Pico de Gallo. To me, this is pure comfort food, delicious and satisfying.

You can find the complete menu from all the marketplaces, including prices, on Disneyland's website. Remember that if you are using the Sip and Savor Pass, you should order items that cost at least $7 when using the pass, in order to get your full value from it. If you want something that costs less than $7 - the average price per coupon on that pass - you're better off paying as you go for it.

The Disney California Adventure Food & Wine Festival runs daily through April 21 and includes free culinary demonstrations on the weekends, as well as first-come "Junior Chef" demonstrations with Chef Goofy on Fridays through Sundays.

And if you're in the mood for a feast for your eyes, Soarin' Over California is back for the duration of the festival, too.

I've tried both Impossible and Beyond in fast food offerings, and to be honest....I have no idea. I mean, I got the Impossible Whopper, and all I tasted was the mayo, tomatoes, onions, and sesame seed bun. If I was blindfolded and someone gave me a Whopper with no patty in the middle at all, I swear it would taste the same.

So how bad will this COVID-19 mess get?