Take a Fresh Look at Universal Orlando's Next Coaster

June 3, 2020, 11:29 PM · On the day that Universal Orlando reopened its theme parks to its first guests from outside the company since the parks closed in March, a reader sent along a few photos of the new Jurassic Park roller coaster, under construction in Islands of Adventure.

Universal has not yet announced the Velocicoaster, so-called based on Universal's trademark application. But the resort did not allow Covid-19 to stop work on the thrill ride, which might open in at the park as early as next year, based on the progress made to date. 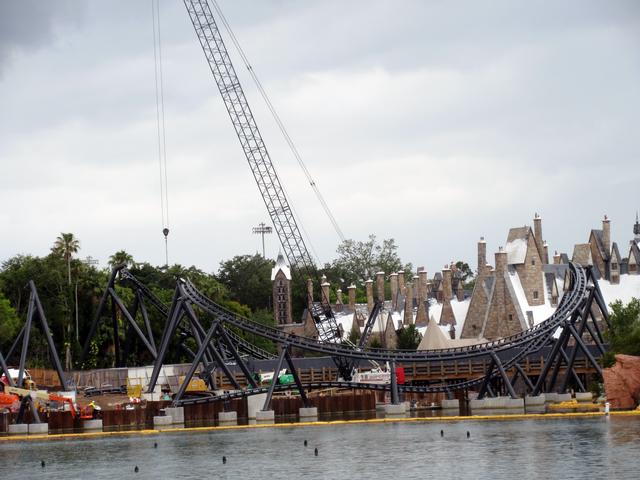 The new coaster runs for the length of the land along the lagoon side of the Jurassic Park Discovery Center, from Skull Island to Mythos. 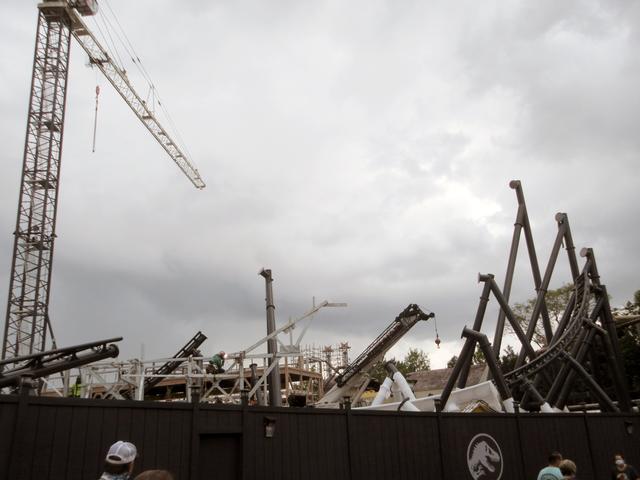 Expected to be a "story coaster" like the nearby Hagrid's Magical Creatures Motorbike Adventure, the emerging track is teasing some potentially sweet elements. 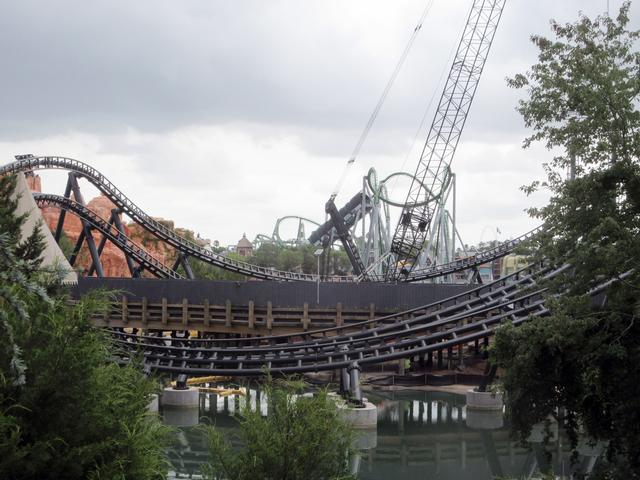 Who's looking forward to ride?

Oh crap, this looks sweet! I originally thought this was going to be like the Flying Dinosaur (actual name) coaster at Universal Studios Japan. It's kind of like Manta at Sea World Orlando, in other words intense and fun yes but with next to nothing in the story department. But the fact that this is a story coaster has got my excitement for this even more so. Hopefully it meshes well with the aesthetic of the lagoon, which it should look enticing as one emerges from the entrance of IOA and into the lagoon. I've yet to ride the Hagrid attraction, I hope to fix that this year, but I am eager for more information about the theme and story of this ride.

I recently watched a CG POV video for this, based on photos and blueprints. If the track layout matches up, then this is going to be a fantastic ride!

Super glad that Universal is getting back into creating great attractions. Their phase where every new attraction was a screen-based ride is hopefully a thing of the past.

Looks amazing for sure. I hope that you won't be able to see it from inside the Hogsmeade street. If you can it will be a bit disappointing but still well worth it for a new exciting ride.

The back patio of The Three Broomsticks will have a very different vibe from what it had before. Hogsmeade never had the isolation Diagon Alley enjoys at USF but this will only further bring the Muggel world into the Wizarding.
I have seen some questions about the potential of moving the primary entrance to the Jurassic (World/Park) section moving counter clockwise around the park from the original bridge to the new one being built between Mythos and The Fire Eater’s grill. I would support this as it’s a real disappointment to walk through the huge Jurassic Park gate only to see Hogwarts looming in the background. I hope the original bridge remains, but operations only uses it during extremely busy times and the JP/W portal is moved to the new entrance closer to the former location of the Island Skipper Tours dock.

I wish there were more info on this coaster. I read there are going to be 2 launches and a few inversions... I hope it's true. The track looks great so far.

I hope this is an E-ticket ride... Universal > Disney - Just saying... (Oh and Trump Sucks by the way) Also Just saying ya know, in case Tim forgot...

That's just the business reality of it and has been since the beginning of theme parks. Someone once asked Walt if he thought it would look odd that Main Street USA would have a gigantic Swiss Mountain in the back of it, and he basically said "meh." It's basically impossible to completely isolate a big coaster. Joe Rohde over at DAK has done an amazing job adding big rides and keeping that place cohesive but he spends a LOT of money lol...a lot more than any company other than Disney is going to spend.

I had completely forgotten about the Velocicoaster! Depending on how construction proceeds, either 2021 or 2022 will be a banner year for Florida coaster fans with the opening of Velocicoaster, Tron Lightcycle Run, the Guardians of the Galaxy coaster, and the redone Iron Gwazi!

This is not really going to be a story coaster like Hagrid's...if anything, this will be more thrilling than Hulk. An RMC-influenced Intamin blitz with five inversions, including a low-to-the-ground heartline roll finale that they tried 13 years ago on Maverick and had to abandon at the last moment. A zero-g stall and a sideways airtime hill in the double helix over the water. Two launches and an iconic top hat. I think we're looking at the second-best coaster in Florida at worst, depending on Iron Gwazi, and a potential top 10 in the world kind of ride, especially if Universal dresses it up with some rockwork and a couple show scenes before the launch and on the brake run.