August 19, 2020, 10:26 PM · Even though Disneyland remains closed — along with the rest of California's theme parks — work has resumed on its planned new attraction for this summer, Avengers Campus.

The Marvel-themed land that is replacing A Bug's Land at Disney California Adventure was supposed to open last month, but work stopped for several weeks after the state imposed a stay-at-home order.

Construction has resumed at work sites across the state, and today Disney sources shared some fresh looks from inside the Avengers Campus construction site.

Here is new Disney Parks Chairman Josh D'Amaro with the Avengers Quinjet that's just been installed atop the new land. 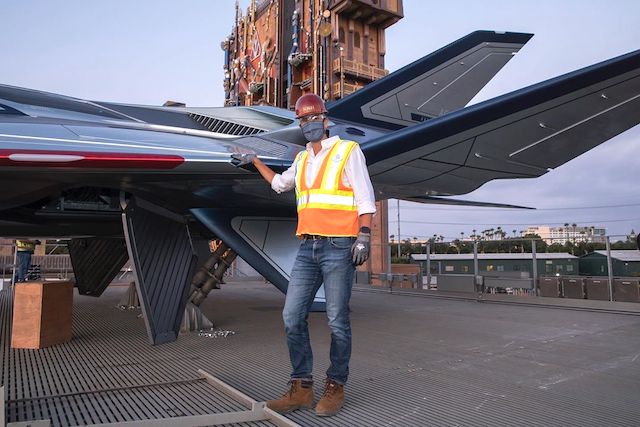 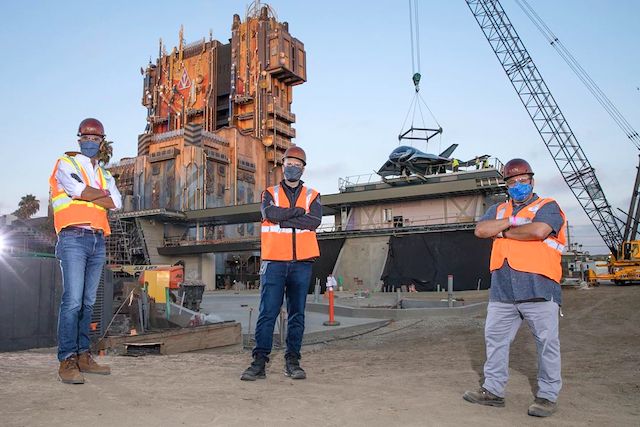 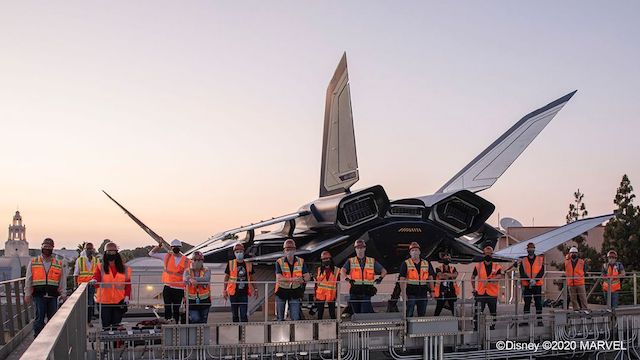 Avengers Campus will feature one new ride — Web Slingers: A Spider-Man Adventure, a Ninjago-like interactive attraction where you're recruited to sling webs to help capture runaway Spider-bots. The land also will feature the Pym Test Kitchen, with oversized food from the lab behind Ant-Man and the Wasp.

If you are wondering, the Quinjet was supposed to feature in a planned "phase two" attraction that was to include a flight to Wakanda, as announced at last year's D23 Expo in Anaheim.

Disneyland has not yet announced a new reopening date for Avengers Campus, and likely will not do so until the state clears Disneyland and Disney California Adventure to return.

I wonder if the Wakanda ride will be a casualty of Bob Chapek snapping his fingers and causing half of Disney's all new theme park projects to disappear.

You could hardly blame him. I wouldn’t expect anything new from the parks division now for several years.

Or it could be a result of a decision made after an extensive evaluation on international economic conditions which assisted in the estimated return on investment -- a value that made suspending development of the attractions a wise business decision.

No problem with projects being delayed but why cancel altogether.
Wait and see how long things take to return to normal before making that decision.

Wow this is great use to see it on my ipad pro. Hope to see it get complete soon.

There’s a lot of movement at Hollywood’ s Super Nintendo World right now. Hopefully we’ll see Universal parks at both coasts open E- Tickets for summer 2021 while Disney’s summer 2019 E-Ticket, Rise of the Resistance, might be ready for guests in 2025.

Stevenz wrote: "You could hardly blame him. I wouldn’t expect anything new from the parks division now for several years."

What a clueless comment. Disney had lots of projects already under construction when the pandemic hit. They should just shelve all these and leave half-built buildings to rot, wasting countless millions in the process?

SeaWorld San Diego Cleared to Reopen as a Zoo

Disney's 'Mulan' Gets Its US Theatrical Debut - Sort Of