The Raptors Are Coming to Universal Orlando

August 25, 2020, 3:58 PM · Theme parks around the world might be canceling or delaying planned new attractions, but Universal Orlando continues work on its still-unannounced Jurassic World roller coaster. Track work appears to be complete, and a couple of new raptors have moved in, too.

One of them actually was planned.

A reader captured the plastic-wrapped Velociraptor statue — dubbed the "Wraptor" — being lowered into place at the park. You can see its tail if you look to the lower left. 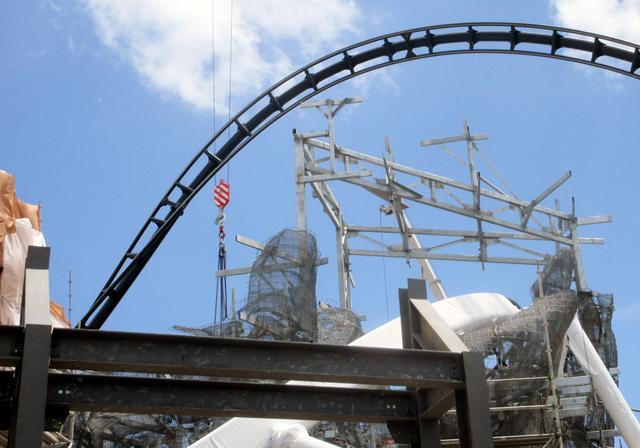 Universal made no attempt to sneak this icon for the new ride into the park after hours, choosing instead to drop the thing into the park while everyone was watching.

“Welcome to Jurassic Park” – us to the colossal, ??-shaped package that just appeared near the unannounced coaster in Islands of Adventure. pic.twitter.com/QMRjZrWGL9

But this new resident isn't the only raptor to move into the construction site. Look closely at the top of the coaster's track and you might see an osprey — a real-life raptor — that's nested at the ride's summit. 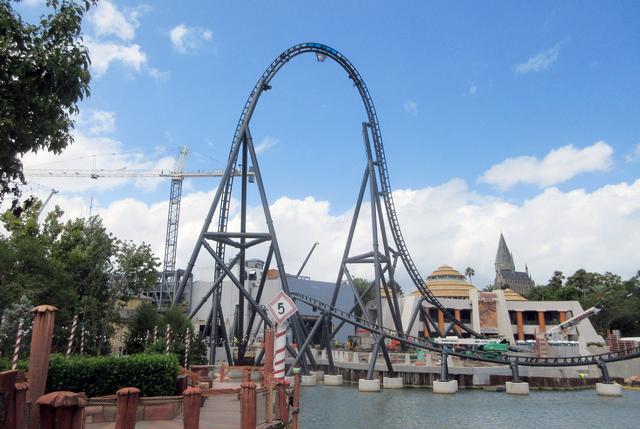 The nest appeared to have been removed at one point, but the osprey returned, anyway. The bird's already got a Twitter parody account.

“If you strike me down, I shall become more powerful than you can possibly imagine” -me, universal osprey. SQUAWK!! https://t.co/lMbURXcUbG

And, of course, Universal Orlando is trying to pretend that none of this is happening.

Universal is installing rockwork around what a trademark application suggests might be called the Velocicoaster. Whatever the name, the ride is expected to be a "story coaster" in the style of the neighboring Hagrid's Magical Creatures Motorbike Adventure, with the leading roles here going to Chris Pratt's Owen Grady and his crew of raptors from the Jurassic World films.

If only Universal can convince that real-life raptor to get out of the way, of course.

Based on construction progress, we expect to see the new coaster debut sometime next year — and for Universal Orlando to announce the coaster officially at some point well after that.

My excitement for this Raptor coaster is through the roof! I visited the Orlando parks last month and after catching up with all the new additions in town, my new #1 attraction in Orlando is the Hagrid coaster. It has awesome animatronics, surprises, and all sorts of awesome stuff. How will Universal follow that up with the Velocicoaster?!

Love this! Can’t wait for the coaster and absolutely adore Universal’s pretending that it’s not happening. USO’s sense of fun has always been one of my favorite things about them ... glad to see it’s still in force now, considering the state of the theme park world.

i moved to orlando 30 years ago right when USF was just about to open. as a theme park junkie, it's been a really exciting place to live and i've gotten to experience many amazing new attraction openings and in many cases, also their closings. by the way, i also count busch gardens and legoland as area attractions. the last few years have been the most exciting with so many incredible changes happening at the parks. but it's the future i am looking forward to most as it promises even more excitement and i can't wait!

This coaster looks amazing. Can’t wait to ride it. Obviously it won’t be this year, but are there any murmurs or rumblings about a possible opening date?

wouldn't it be great if they had a big old Mosasaur pop out of that water when the train passes by?

I'm a coaster enthusiast and I love that after creating maybe the greatest ever "family"/GP coaster with Hagrid they went back to Intamin and basically said "Ok, now make us one of your insane ones", lol. This ain't no GP coaster that's for sure, far more so than even Incredible Hulk. The dive loop waits until almost the apex to actually flip you over so that thing's gonna be ridiculous and those overbanks, transitions, and near-misses in the first half already look like they'll be tons of intense fun. But that second half... In what I can't imagine is more than 1000 feet of track you've got a top hat, vertical drop, zero-g stall, undulating helix, wave turn, outer-bank (that looks completely, utterly mental), bunny hop ejector hill, and what genuinely looks like the one of the most ridiculous heart-line rolls ever built. I can't even process what that last run of elements is gonna be like, getting flung every direction possible one right after the other, but I'm here for it and absolutely can't wait. I'm now almost as excited about this as I am Iron Gwazi. Almost. Getting brand new RMC and Intamin credits for my 2021 HHN trip is something awesome to look forward to.

SeaWorld San Antonio Does Away With... Its Off Season