How Do Disney's Cast Members Think the Reopening Is Going?

Florida Governor Ron DeSantis has suggested that the state would allow its theme parks, including Orlando's Walt Disney World, to increase the number of guests they admit as they try to manage the ongoing pandemic. Putting aside the question whether more tourists want to visit Florida right now, would theme park employees be ready for them?

Earlier this month, we featured the voices a few Disney cast members and Universal team members in a post. Theme Park Employees Talk About Working in the Pandemic. This week, Theme Park Insider readers visiting the parks spoke with some Walt Disney World cast members about how they're feeling at work right now.

I won't offer direct quotes, since I was not the person talking to the cast members. But readers heard some consistent themes from the cast members who were willing to share their stories. (Cast members in photos were not the ones who shared stories.)

Yes, having to wear face masks and shields is frustrating, many said. But cast members generally appreciate the efforts that Disney has made to protect them and especially appreciate guests' compliance with those rules. If there's anything that cast members actually are universally frustrated with, it was Florida's broken unemployment compensation system, which made it difficult and often impossible for cast members to get the money that they deserved while furloughed. 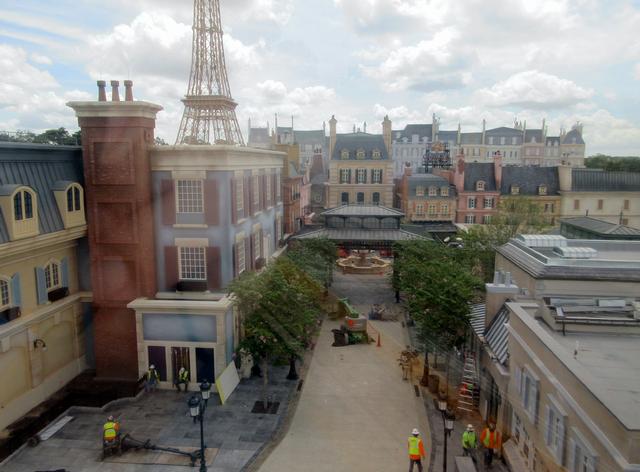 A look from the Disney Skyliner at the expansion of Epcot's France pavilion.

Cast members with years of service should not have gotten kicked out of the system because the state couldn't verify their eligibility - especially with Disney's IT team offering to work with the state to help get cast members enrolled and paid. But the cast members our readers spoke with reported that happening. (This makes me grateful to live in California, where the state was able to process unemployment claims relatively swiftly and effectively for Disney cast members and millions of other Californians who lost pay during this crisis.)

At least back at work, cast members are getting paid now. Cast comfort seems to be inversely proportional to the amount of guest contact a particular cast member has. Food and beverage cast work behind Plexiglass and have minimal contact with guests now, thanks to the expanded use of mobile ordering. Merchandise CMs also appreciated the Plexiglass barriers and touchless payment options. But attractions cast still feel some anxiety, even though they said they'd rather be here at work than back at home without the money they need to help support their families. 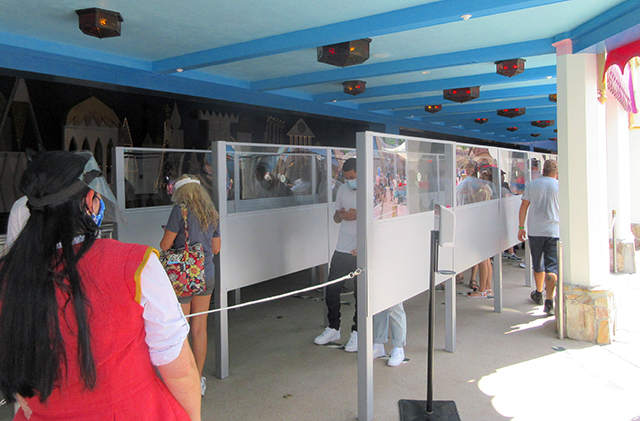 Plexiglass barriers in the It's a Small World queue

Getting hours is a constant source of frustration, though to be fair, that's always been an issue among park employees. But before, it was about trying to get overtime to earn enough extra money to get ahead financially. Now, it's about getting enough hours to make rent and not fall further behind.

As much as it hurt many in the community to see Disney shut down its college programs, the cast who are working in the parks now are happy that the CPs are not around to take hours. No one wants to see wall-to-wall crowds return in the current environment, but plenty of cast members would be happy to see an extension of park hours that would allow them to add extra hours to their paychecks.

And here's an unusual issue: A Horticulture cast member talked about their frustration with all the disinfectants that Disney is using to help keep guests and cast safe. Turns out that they don't just kill germs and viruses — they kill plants, too. So there's extra work to be done now (in the same number of hours, of course) to keep Disney's foliage in show condition.

In general, cast members reported that if they had to go back to work, they're happy to be back at Disney rather than having to work outside the parks, where the enforcement and support for new safety procedures are not alway as strong.

But cast members were not happy with reports that Disney's top managers have rolled back their pandemic salary cuts — not while so many of Disney World cast members are struggling to get the hours they need to get out of the financial hole that the shut-down put them in.

Are you a Walt Disney World cast member who'd like to share your story with Theme Park Insider readers? Email me at themeparksinsider@gmail.com and I will include responses anonymously in the comments. Thank you, again, for all that you do for theme park fans!

The bit on the plants is the most interesting part, still feel for them trying to handle this new normal we're in but doing their best.

God bless Disney's cast members. To have to deal with guests and enforcing COVID-19 protocol seems like a fool's errand some days. But to also continue to provide the top level of guest service at the same time is a truly thankless task that doesn't get appreciated enough.

I suspect there will be an increase in the number of Orlando themed entertainment workers joining unions in the not-too-distant future. First because of this story's report about CMs being frustrated about Disney execs not maintaining salary cuts and second because of the announcement that UO hotels are laying off another 800, non-union workers.

Lord, that picture of the Small World line with the plexiglass barriers is enough to put me off going. It's one thing to wait in a line, it's another to wait in a mouse maze.

I think Walt Disney World is doing the best job possible under the circumstances. Disneyland could copy this, if they were allowed to. And I would feel safer at Walt Disney World than I do at my own indoor guest-centric job in another state.

My job feels MUCH more dangerous than I would feel at Walt Disney World right now.