The Tastes Are a Treat, Not a Trick, at Cedar Point's Fall Fest

September 21, 2020, 9:21 PM · Cedar Point is one of only two Cedar Fair parks to remain open through October (the other being Kings Island), with its wildly-popular HalloWeekends scaled down and renamed "Tricks and Treats Fall Fest." Open from noon until 8 pm on Saturdays and Sundays through November 1st, Fall Fest has none of the haunted houses, scare zones or "Screamsters" that have entertained Cedar Point guests since 1997. That doesn't mean it's not business as usual at Cedar Fair's flagship park.

The Halloween decorations are up, the giant skeletons are once again looming over guests, the massive animatronic Troll one again roars at passers-by, and thousands of bright orange pumpkins and multicolored gourds of all shapes and sizes fill the flowerbeds and walkway borders with intricate patterns. Live performers, costumed and made-up for the spooky holiday season, entertain guests on outdoor stages, keeping the midways alive with the music of the musicians and the movement of the rides. It's not HalloWeekends, but it is Halloween at Cedar Point. The park took pumpkins and made them into the best, perfectly-spiced pumpkin pie — a fitting finale to the first half of its two-season celebration of its 150th year.

My good friend and photographer Scott and I spent over five hours at Cedar Point on a picture-perfect Sunday afternoon. The weather was ideal — warm, not too hot or too cold, sunny, light breeze — and literally ate our way through Cedar Point. This is something that would have been difficult to do in the past. Cedar Point might be the best ride and roller coaster park in the world, but the quality of its food offerings rarely equaled its thrill offerings.

I'm going to put this in all caps, because that is how strongly I feel about it.

For the first time, Cedar Point has offered a Fall Fest Food Tasting Card. For $30, guests can try six offerings of special seasonal foods from a selection of 24 different options found throughout the park. Eleven dining locations, from sit-down facilities such as Hugo's Italian Kitchen and Chickie and Pete's, to the cafeteria-style of the Corral and BackBeatQue, and counter service outlets such as Engine House Custard and the Happy Friar, offered one "Trick" and one "Treat" special menu item. The "Tricks" were usually more spicy or tangy, while the "Treat" items were sweeter and more seasonal. 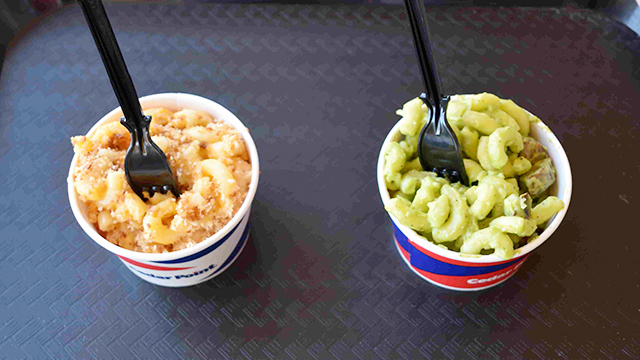 In my 64 years (my birthday was last Saturday, thank you) I have never left Cedar Point feeling as gorged as I did that Sunday. We used up every choice on our card, and even brought a Pumpkin Spice Funnel Cake (from French Quarter Confections) home to my wife — we simply couldn't eat anything else! The offerings were remarkable varied, from smaller options such as a honey-spiced corn dog from Happy Friar (coated in a sweet batter with a dipping sauce infused with cinnamon, nutmeg and ginger) to Toxic Mac at the Corral ("Oooey gooey macaroni pasta tossed in a cheesy green fresh basil pesto sauce with grilled sausage"), to dessert items such as a Fire Toasted Dessert Pizza from Wagon Wheel Pizza (imagine the best S'more you ever had, baked on a sweet pizza crust and drizzled with raspberry preserves while it bakes!). Two soups were offered at Chickie and Pete's, the "Witch's Cauldron Tomato (bisque) Brew" and "Goblin (French onion) Soup", both served in herbed bread bowls and covered with melted cheese. Scott had both, and declared it a tie as to which was better. They both ranked 5 out of 5. While he scarfed down his soup, I tried one of the specialty drinks from one of the "Brews and Booze Bars" scattered throughout the park. 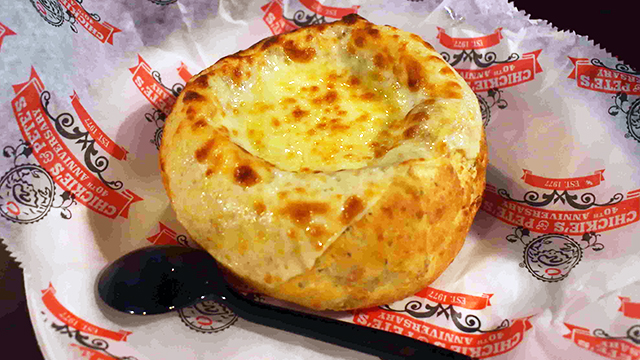 These are not included on the tasting card, and at $12/drink I would say that they were probably worth it. While they also offered a wide selection of local craft brews, I decided to stick with the Halloween theme and try the drinks with the "scary" names. The "Green with Envy" was Gold Peak tea with apple juice, Granny Smith apple syrup, caramel vodka and caramel sauce drizzled over frozen apple slices, which kept the drink especially cold. Delicious! Later in the day, I had "I Vant to Drink Your Blood," which is lemonade with a syringe in the drink filled with strawberry syrup so that I could inject the blood myself (!) and spiked up with peach schnapps and vodka. I finished the day with "Jack-O-Lantern Juice" — apple juice with pumpkin puree, apricot, vanilla and fall spices, and Fireball cinnamon whisky (this was probably my favorite). Every one of these specialty drinks (and there were others I didn't try) were freshly-made when I ordered them, can be make non-alcoholic, and were both delicious and refreshing. 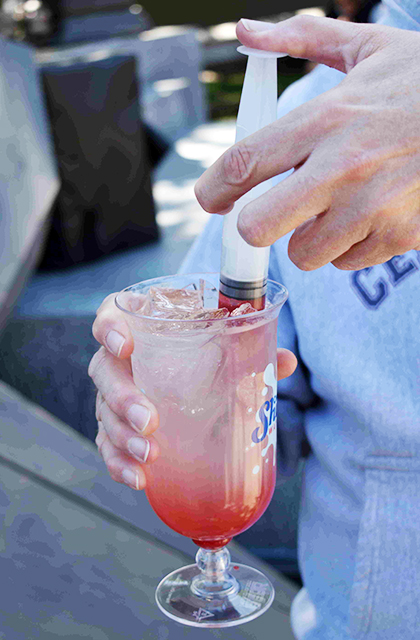 Nothing tasted bad. A few things, however, were not 100 percent hits. The El Diablo cupcake at Engine House Custard was advertised as a "Trick" offering, frosted with a cayenne pepper buttercream frosting and dusted with crushed cinnamon candies. It was delicious, but I could not taste the cayenne pepper at all, and the cream filling of the cupcake neutralized the cinnamon candies. It was still delicious, but not "Diablo." Scott tried the Fall Harvest Corn from the Dive In (fresh roasted corn-on-the-cob coated with maple butter). The taste was really pretty good, but the maple butter was more like maple frosting, and it was so incredibly sticky and gooey that he couldn't eat much of it. I tried a bite, and got so much maple goo on my mustache that I smelled it for much of the day where it got on my mask! They needed to make the maple butter more butter and less frosting. 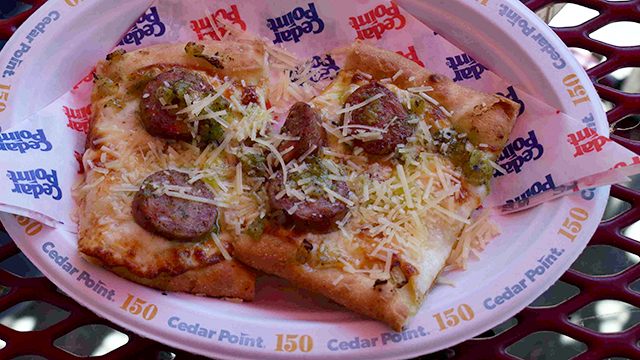 The Fall Harvest Pizza, a flatbread pizza with olive oil, caramelized onions, basil and sausage with provolone and parmesan cheese, was probably the highlight of the day. It was the best pizza I've ever had at any theme park anywhere, and the Candy Apple turkey leg at BackBeatQue (served to me by Tony Clark, the Director of Communications for Cedar Point who was moonlighting behind the serving counter that day) was moist and flavorful, and they served the cinnamon apple cider sauce (the "Treat" part) on the side to make it easier to eat. I decided to pass on the "Trick" Dragon's Leg devil Thai chili sauce, but if it was no hotter than the El Diablo's cayenne pepper butter cream frosting, I probably should have tried it. 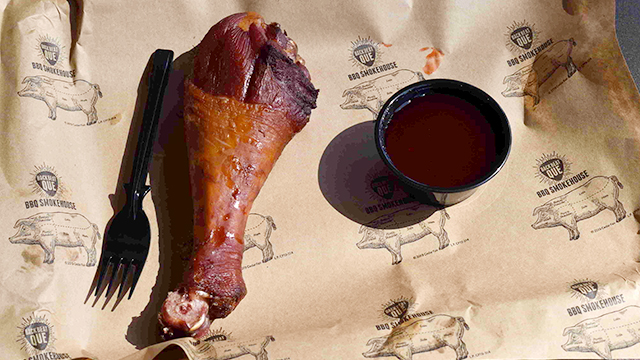 There were so many other options we just didn't have room to try: the El Chupacabra Street Corn with cumin chili cilantro butter; Day of the Dead Fries with cilantro, lime and garlic sauce, cotija cheese and jalapeños; the Zombie Cheddar Burger with spicy apple bacon compote; and several others. If you have a chance to get to Cedar Point this year, I would strongly recommend you skip breakfast, get your tasting card, and discover how Cedar Point has made major advances in their food options.

I miss the HalloWeekends Haunts this year, but the remarkable food offerings I discovered at Cedar Point more than made up for it. Now, it's time to get back to my keto diet — but it was worth it!

It was a great day and I was stuffed as well... I even passed on my favorite fresh made soft pretzels. Thanks Jim for taking me along... it was a blast!

We've been enjoying the festival so far. It would be nice if the lanyards were good throughout the entire run of the event and not just the day-of. With the crowds increasing as we head into October it might be difficult to get all six credits in, especially with the special food items located inside existing food locations. Lines can get pretty long at places like Coasters Drive-In.

I agree. I waited in line at Coasters to try their burger with a spice apple relish (I think) but the line was moving slow because everyone in front of me was ordering BIG orders. Really, I think 1 tasting card could be enough for two people, or two for three people. The savings is considerable, something like 30% off the regular price of the items that we remembered to price. Coasters was the worst- everything else was not bad at all (last Sunday). I agree that the cards should be good the run of the Fall Fest.

Check Out These Dining Updates from Walt Disney World