Discover the Secrets of the World's Biggest Indoor Theme Park

"Our Miral Chairman Mohamed Khalifa Al Mubarak has been a lifelong comic book enthusiast, and actually calls himself an extreme fanboy," Miral Asset Management Director of Theme Parks Development Glenn Davidson said. "He believes comics were created to try to showcase as much goodness and humanity as possible. We can take that as a metaphor of how we want to be, and how to treat others."

"It was clear from the beginning that this was to be a new kind of Warner Brothers theme park. While some of their previous parks were called Warner Brothers Movie Worlds, the decision was made early on that this would not be a traditional studio park that celebrates cinema as its central identity," Parkwide Creative Director Dave Cobb said. "Rather than a behind the scenes experience, this would instead be a place where these beloved characters live work and play. Many of the Warner IP had not existed to this level of depth and immersion before in a theme park, so it was a fantastic opportunity to collaborate with Warner Bros. on creating deep lateral content that enriched and expanded upon the incredible catalogue of characters and stories."

The result was 29 attractions in six immersive lands, backed by an impressive collection of media, as Cobb detailed:

But perhaps the biggest challenge for the design team was to contain all this content within an indoor space, even if the project was to become the world's largest indoor theme park.

"One way to envision the masterplan of this park is to take a traditional outdoor park, throw a lasso over it and shore it up to maximize space," Cobb said. "This resulted in a very unique back of house strategy, including a second floor infrastructure that we colloquially call top of house."

"We did a lot of benchmarking," Cobb said. "We went to see a practically every indoor theme space in the world, along with Miral and Warner Bros. and we all sort of observed the positives and negatives. Obviously the big reason it was done indoors is because of the region and the climate. It gets very hot in the summer, so an indoor park was the right way to go. But the challenges of making that space not just a mall really became about theatrical control. It became about taking what you would normally have as just ceilings and walls and trying to make them part of the palette of the storytelling. It really just was a careful study in sight lines and how we reveal each thing around every corner, so that every time you come into a new indoor space, it isn't just entering a room, it's sort of discovering a new world.

"Acoustics were also another big part of that, and we very carefully looked at how to abate a lot of that din — that noise you have in an indoor space — and still have music and life and energy to it. So there was a lot of really careful thought and a lot of unique engineering and construction techniques used to make those spaces theatrical and also be functional as an indoor space."

But function is one thing — authenticity of experience is another. Designers had to decide how to populate Warner Bros. World Abu Dhabi and have it come across to visitors as a convincing story experience.

"There's an embarrassment of riches when you look at Warner Bros.' classic animation and DC Comics — there's so many characters," Cobb said. "So it was really a careful study, not only in what's popular sort of globally, but also what's really well known in the region. A very good example of that is why we included Tom and Jerry. Tom and Jerry is one of the highest-rated characters in the entertainment industry globally. It's one of Warner Bros.' top-rated characters. Its Q-score rates higher than some other cartoon mice." [LOL - Robert] "The reason for that is that they don't require translation. So those cartoons have been played in syndication for decades, all over the world, on every single TV set, so everybody knows Tom and Jerry. It's one of the reasons we included it and it's kind of a sleeper hit in the park."

Cobb and his team at Thinkwell then set about to create a context that would help make each land in the park feel authentic to visitors, such as in the park's Cartoon Junction land, where Tom and Jerry live along with Scooby Doo, Bugs Bunny and other classic Looney Tunes characters.

"So how do you invent an early [20th] century American town?," Cobb asked. "This happened through a disciplined process of thinking through the evolution of its residents and its commerce. You start with, who's the first settler? That's usually the biggest house in town — usually the rail baron or the oil baron. That became the big spooky mansion that houses our Scooby Doo Museum of Mysteries attraction. The story in that queue supports this early century town legacy.

"Then a small neighborhood sprung up around, with more houses and shops and cafes and a vaudeville theater where Bugs and Daffy got their start. So slowly the town starts to thrive once we give it a reason for being.

"Along the way we said, what was the big boom in this town? Well, that's when it became a company town, and what company can it be that it can hire thousands of people? Of course, Acme. 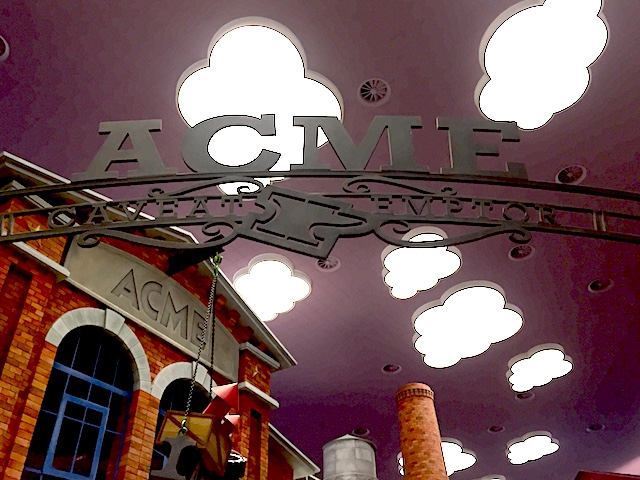 "Acme starts as a giant 1940s style industrial brick factory and it can't keep up with production, which is why the factory floor is so crazy and chaotic. Here we have some smaller attractions for little ones — active play and a family friendly cafe — all the kinetic energy and silliness of Acme under one roof. But then we thought, once Acme became a success, and they started to make beyond just anvils and magnets, what did that business look like? 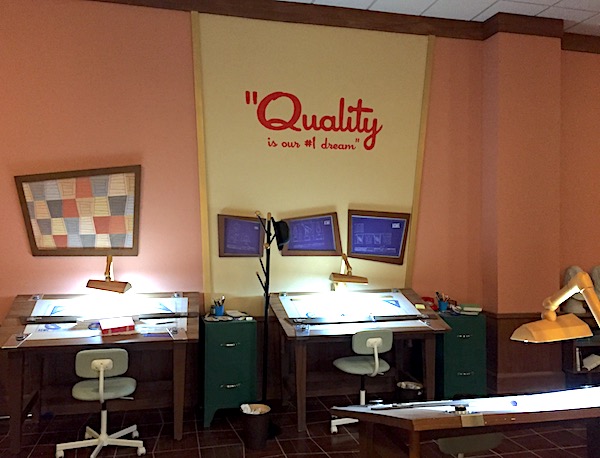 "So we built a building across the street from the factory that is more mid-century, sort of like Looney Tunes meets Mad Men, which our guests experience in the queue for our AniMayhem ride, where they are recruited as new delivery drivers. Here, we were encouraged to massively expand upon the history and look and feel of Acme as a company, even though those details had never fully been explored in the cartoons or the IP before. It was a close collaboration with Warner Bros. to create this highly detailed lateral content, bringing the world of Acme to life in a whole new way, which now has become a sort of extended cannon within the Looney Tunes brand."

"This was a 10 year labor of love for everyone involved with a client, Glenn included, and Miral that were so passionate about what this wanted to be, and so keenly aware of what it takes to entertain an audience in a theme park like this, and very aware as of the brand," Cobb said.

"It was really rewarding to have that kind of creative partnership on a project of this complexity and scale, and we couldn't be more proud of it as a team."

These articles based on foreign theme parks are very intriguing and insightful. One of my favorite parts of this site and something that differentiates it from others. This park is on my to-visit list. Speaking of that, and the 15 or so minutes I have to spare, I'm going to list the top ten foreign parks I've yet to visit that I want to. Lets imagine its the year 2023 when a pair of parks open up and we can feel a bit more secure in booking foreign trips:

I have been to Tokyo and Hong Kong Disney, Universal Studios Japan and Singapore. All five are fantastic and worthy of the flight over the Pacific. My rankings: