We told you last month about the five floating platforms that will support the ambitious new production, which replaces Illuminations and Epcot Forever. Disney World visitors have been getting a closer look at them as Disney moves the platforms into position on the lagoon. 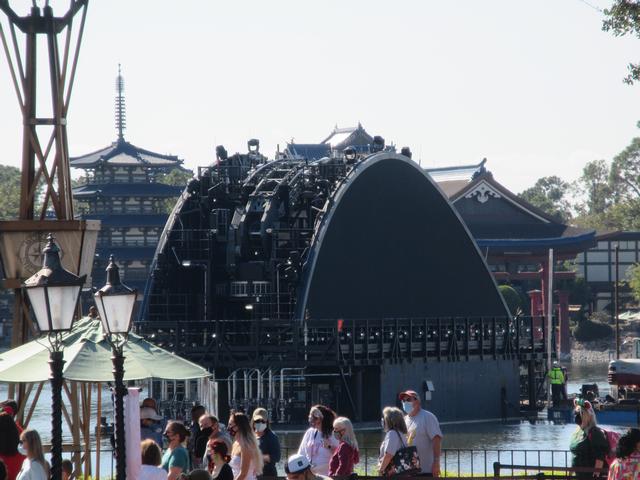 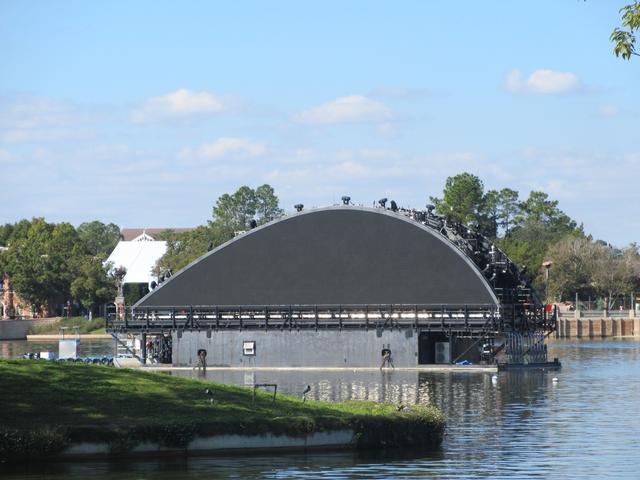 Thank you to a Theme Park Insider reader for submitting the photos.

"This shows celebrates Disney music and stories that are inspired and influenced by people and cultures from around the world," Imagineering Portfolio Executive for Walt Disney World Resort, Zach Riddley, said of the production last month. "It's a massive and ambitious show we're bringing to life on the largest lagoon in any Disney park. And we've developed one of the largest toolkits ever constructed to tell the story in a truly awe inspiring way."

Harmonious was supposed to debut last summer but, like so many other attractions, was delayed due to the pandemic. Disney has not yet announced an opening date for the show.

Wonder if someone mixed up the measurements. It's so out of scale. This is just one barge. Will you be able to see any views across the lagoon during the day, or when the daytime fountains are on, will this look like Niagara Falls got dropped in the middle of the lagoon?

To me, this doesn't look any taller than the globe from Illuminations (through, granted, that wasn't out all day long, and it's certainly not easy to make the comparison from these photos).

So I could very well be wrong. I see how tall it looks, in perspective, against the pagoda in the Japan Pavilion. But that depends on where it was, whether that was the final location, and from where the photo was taken.

I'll wait and see how it looks in action before I pass judgement, but I definitely get where Joseph is coming from.

This is the game changer ... Harmonious is gonna be huge ... Post COVID this will pack World Showcase promenade and will make cash registers spin!

Hopefully it looks better once its fully installed. And the new show sounds like they are staying true to the theme of the world showcase, while also fulfilling on Disney’s promise to be more inclusive.

They look like eyesores now, but I'll wait until I see them fully installed before I make a judgement call. I am so excited for this show- it gives me hope for that day when I can stand shoulder to should with other guests in a crowded park full of energy. Yep- the crowds, for me, are a part of that experience. Crazy, right?

If the site lines and views across the lagoon are impacted by that (I guess site lines don't apply anymore) it's going to wreck the view of World Showcase.

That show had better put away any doubts...otherwise they'll call it.

"Creature in the Black Lagoon".

What Is the World's Best Theme Park Restaurant?