What Is the World's Best Theme Park Show?

December 16, 2020, 3:37 PM · What is the world's best theme park show? We asked Theme Park Insider's readers that question, and today we are announcing the 10 finalists that topped the vote in our recent survey of newsletter subscribers.

These 10 finalists will face off in a reader vote over the next seven days to determine the winner of the 2021 Theme Park Insider Award for Best Show. Typically, we have a rule that shows that closed during the year are not eligible for our year-end honors. However, given the disruption across the industry due to the pandemic, we decide to scrap that rule this year. Therefore, your nominees are: 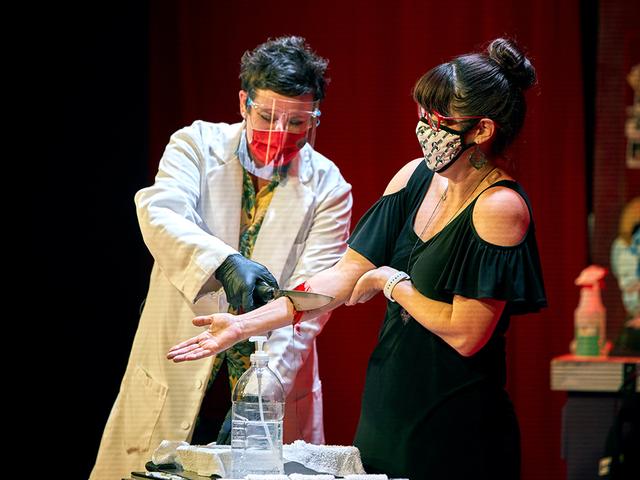 Here is your opportunity to vote... and to campaign in the comments. We will announce the winner on January 1, 2021.

Went for Fantastmic but have to give it to Waterworld, 25 years and so successful to the point some seeing it have long forgotten the movie it was based on.

Had to vote for Waterworld. I never get tired of Fantasmic but gave the nod to Waterworld because the actors really earn their money with each performance. The physical demands of the Waterworld actors continues to amaze me. Fantasmic is pure Disney, with the sights and sounds, but almost anyone could sub for one of the performers. Hopefully, I'll be able to see Bourne soon and then compare it to Waterworld.

I am still going with Festival of the Lion King. That show is magical and fits perfectly with the theme of the area and the park. There is something for everybody.

Waterworld really has proven itself with the test of time. A little bit of action, stunt, comedy, heros to cheer for, villans to boo at and an explosive finish. Really miss the Halloween Horror nights version with blood packs and a bit more colorful language.

I would vote for either Fantastic at Disneyland Park, or World of Color at California Adventure.

This was the easiest vote ever, Horror Makeup Show! I love it so much!

Fantasmic, the 2017 update. That 50 foot Maleficent dragon animatronic is impressive.

Sorry guys, but there is no contest here. Fantasmic is the best show in theme park history, hands down.

I have to say Fantasmic due to the spectacle and integration of park elements in a way no other show has done, but WaterWorld is a very close second place and probably the best actor-driven performance still playing at a theme park.

I'm with AJ and others here in that Fantasmic! has to be considered the best. Waterworld is an amazing spectacle, and the use of talented stunt actors is an increasing rarity in theme park shows. However, the original Fantasmic! in Disneyland (not to be confused with the version in DHS) is about as close to perfect as a nighttime show can get. Virtually every nighttime show that's been developed over the past 20+ years can trace some aspect of its production to Fantasmic! and yet the Disneyland show still wows and amazes guests (well not right now, but hopefully again in the spring) with perfect pacing, incredible effects, and a moving soundtrack that hits virtually every emotional note on the spectrum.

....
*
In my own top-20 list, I could include very realistically only 4 American shows:
position 12/ 'Fantasmic!' (Anaheim version)
position 13/ 'World of Color' (Anaheim)
position 14/ 'Waterworld' (any of all 3 versions)
position 16/ 'Finding Nemo The Musical' (DAK)
*
I my list, the 11 going before are: 10 times French, 1 time Signapore...
(I sometimes feel a pity for Americans who do not have experienced conciously or realistically anything out of the USA)

For those that haven't seen it I think Bourne is AMAZING. I now live in Orlando and still try to see it every time I'm at the park. It's unlike anything else I've ever seen with he integration of the screen and physical effects. You almost forget that it's a show and feel like you're on a ride. On the other side of the country Waterworks is awesome as well and I think a close second.

FotLK hands, or paws, down!