January 15, 2021, 12:43 PM · The head of the Walt Disney World Resort has shared two of the first live photos from inside the Star Wars Galactic Starcruiser hotel, now under construction at the resort.

Here is Walt Disney World President Jeff Vahle with one of the bunks in the hotel's cabins. 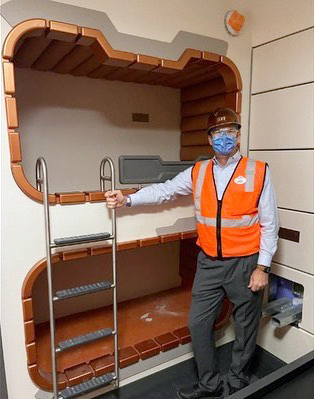 Disney is using the word "cabins" rather than "rooms" because the Galactic Starcruiser is themed to be a ship in space, after all. Bookings will be for two-night cruises that will include a "port call" to Batuu, i.e. Disney's Star Wars Galaxy's Edge land at the Disney's Hollywood Studios theme park next door.

The experience is designed to make visitors feel like they are traveling in space, from the moment they enter the resort's front door and take a shuttle up to the starcruiser to the moment they depart. Interactive adventures on the starcruiser will be available, effectively making a trip here into a live-action role-playing experience for those who wish to take it to that level. To preserve the illusion of space travel, all the "windows" in the hotel will be animated screens, much like the one that Vahle and Disney Parks Chairman Josh D'Amaro posed with here. 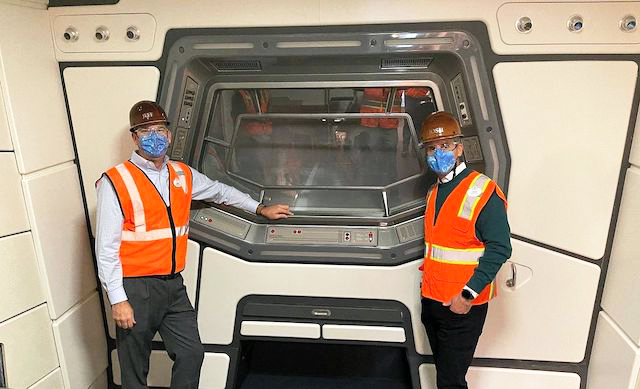 Vahle also shared a concept image of what that window will look like when the hotel is open to guests. 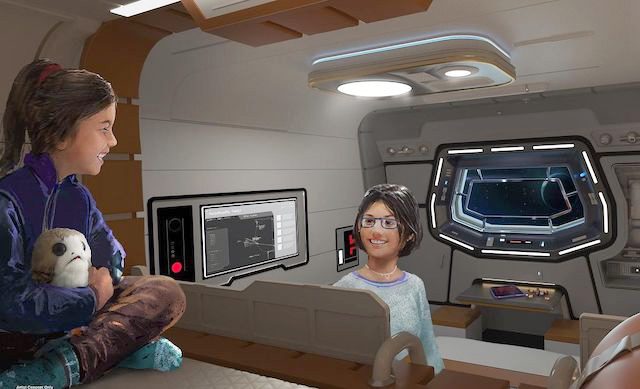 Even the port call to Batuu will be on buses with the animated windows, to maintain the conceit that guests are traveling in space. (Without the zero-G, one supposes.)

Although the hotel was scheduled to open sometime this year, that's been delayed due to the pandemic. Disney has not yet announced a new opening date or a date to start booking.

...Nor has Disney given any indication of how much a 2-night/2-day stay aboard the Halcyon will cost, and everything the experience will and will not include (i.e. food and beverages, park tickets, private VIP tour of Batuu, FOTL access to RotR, light sabers, costumes, shows and experiences exclusive to star cruiser guests, etc...). There's still an awful lot of unreleased details about this experience, especially considering that Disney was only months away from starting to take reservations when the pandemic struck.

My Star Wars obsessed hubby and I decided to book this cruise way back when it was first announced. We have been saving for it since. I'm really curious as to how it will integrate into a longer WDW stay. I imagine switching hotels would be included in certain packages? Always hungry for new details, thanks for the pic! Glad to see it continues. (More questions: how much more likely is one to get to experience ROR if one stays in its themed hotel? What inoculations should one take before venturing among alien species? Does mind-control work on those in charge of cabin upgrades?)

I think the easiest way to handle this would be to ship the Starcruiser guests over to GE an hour early, during which they could have their run on Rise and Falcon... not to mention early-morning drinking in Oga's. But I'm not in charge at Disney, so who knows what they'll actually do?

By the way, a Disney insider has sent me this exclusive video where cast members talk about the amount of money you will need to say on Galactic Starcruiser.

Cabin for one? Pricing for a 2-night/3-day stay starts at $3,300 for one person, or just over $1,000 per person, per day. Cabins do sleep up to five passengers, so there’s also the option of maxing out the cabin occupancy for a relatively cheaper price per person. A cabin with five passengers would cost $7,200, or roughly $1,440 per person, for a more feasible $480 per person, per day price range.
Do note that these prices can change as the hotel is still months, if not years away from opening, and Disney Parks and Resorts might scale these prices up or down based on a combination of demand and occupancy projections. However, these numbers are the current ones being thrown around in discussions regarding the resort.

As long as they take Beskar, Spira, and Mickey Dollars, they can have everything in my safe.

WDWNT is a pretty solid source, and has been reporting those prices since the project was announced. However, I wouldn't believe any numbers for this until I see them on an official Disney press release. Also, it's not just the price that's important, it's what guests actually get for what are likely to be some of the most expensive hotel rooms in the State of Florida. If the rates include park tickets, costumes, food and drink, exclusive entertainment/access, and plenty of other perks, $1,000/person/night might not seem that ridiculous. However, if all of those important aspects to make the Halcyon experience fully immersive need to be purchased a la carte, those rates are pretty absurd. The devil is definitely in the details here, and Disney has been short on the important ones when it comes to this highly anticipated project.

Anyone who says they know the specific price for this at this point is just making stuff up. But it will be expensive, which is why Disney did not scrap this project as it was canceling or delaying things all over the world. Disney thinks there is a niche upmarket for this that will pay the premium price it wants to get. And yes, that almost assuredly means more than $1,000 per person per night.

Actually, they gave prices in per day, so per night is even more.

Seriously, if anybody is prepared to pay upwards of $1K p/night to stay in this then they should use that money more wisely and spend it on a psychiatrist.

I guess staying in a broom closet themed like nothing we have ever seen in Star Wars will be a huge succes for current Disney fans. I rather would stay in a motel 6 if I had to choose.

If all else fails, Disney could advertise it as an anti-claustrophobia therapy spa.