July 7, 2021, 1:42 PM · The past year might have been the roughest ever for the theme park and attractions industries, but that hasn't stopped business owners from wanting to build new parks.

Here's the latest example to hit my email in-box - Jackalope Junction StoryPark, a proposed theme park to be located within a planned 500-acre master-planned community near Williams, Arizona.

For those who haven't spent time in the mountain West, a jackalope is a made-up cross between a jackrabbit and an antelope - a taxidermy mashup that you might find as a wall-mounted joke in a roadside shops and attractions throughout the region. In short, it's a long-before-the-Internet meme.

That makes it a perfect theme for a fanciful western roadside theme park. And Williams provides a lot of potential as a roadside attraction location. The town is located on Interstate 40 in northern Arizona, at the intersection of US 64 that millions of visitors take each year to drive north to the Grand Canyon. It's also home to the depot for the Grand Canyon Railway, not to mention being a dead ringer for the fictional town of Radiator Springs in Disney/Pixar's Cars.

That comparison really hits me in the feels since my car once broke down pretty much right in front of the site of the proposed Jackalope Junction park, stranding me and my family in Williams for three days. But that's another story.

As for the proposed theme park, Jackalope Junction is a late 1800's steampunk-inspired town that lies next to an abandoned mine, where Jackalope Jim is the park's main character and hero. Creator Greg Schumsky said that he was inspired by tales of the Old West as well as the fantastical worlds of Jules Verne. 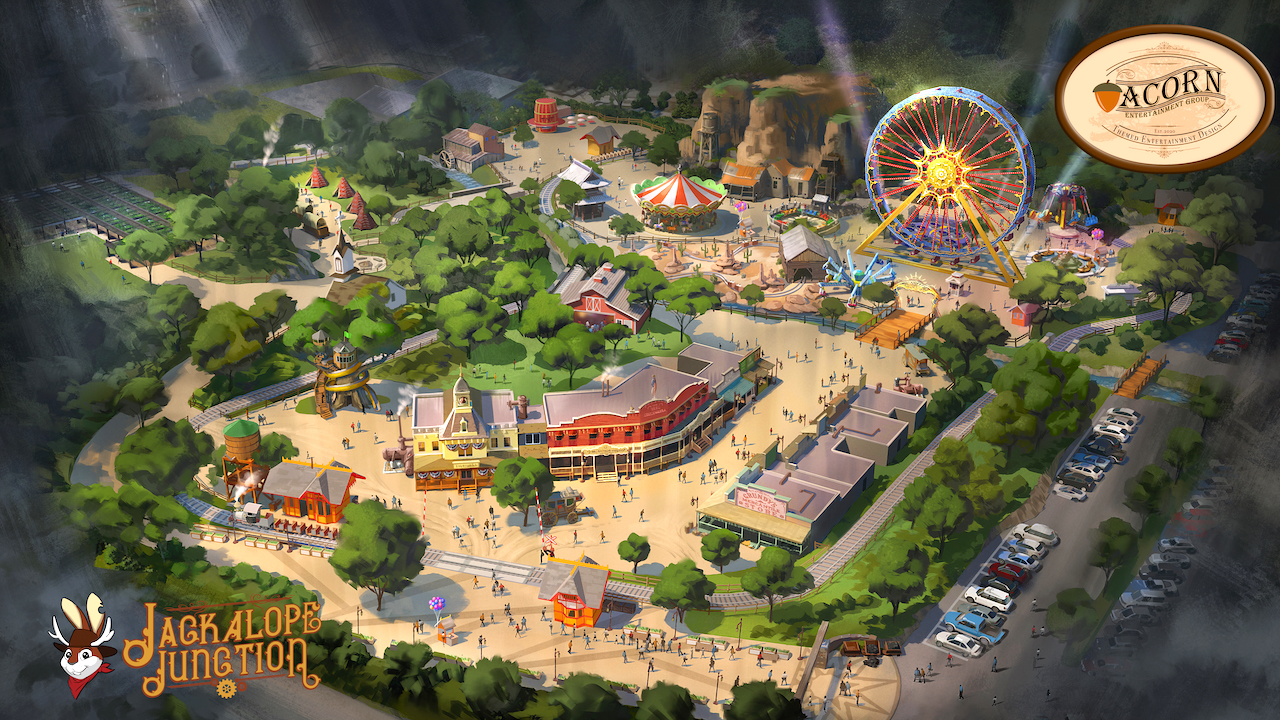 "Since I was a child, I was enthralled with both forms of storytelling - my first real western book I loved as a child was 'Mr. Mysterious and Company' by famed author, Sid Fleischman, and was equally enthralled by several movies based on Jules Verne’s books, as most of the characters started off as just your average person, yet they were able to overcome so many challenges and obstacles that only made them stronger."

Jackalope Junction won't be a major park - it's designed for less than 12 acres and a maximum of 3,000 visitors a day. Planned attractions include a Mine Cave Adventure Tour, a dark ride/coaster combo called Baron VonZümski’s SkyRunner Rocket Planes, and several other traditional carnival and spinner rides, as well as a robot owned and operated coffee house and a Native American village featuring the park's Magic Sky Theater.

Plans are to open by summer 2024, with developers seeking funding through the State of Arizona Theme Park Tax District Bond. Schumsky's Acorn Entertainment Group is designing, in collaboration with Denmark's AdventureLAB and with former Legoland California President Peter Ronchetti advising, according to the park's press materials.

Award-Winning Pageant of the Masters Returns