A Major Hurricane Might Be Heading Toward Walt Disney World

September 23, 2022, 3:54 PM · A tropical depression in the Caribbean is expected to form into a major hurricane on track to hit Florida by next Wednesday, according to the National Hurricane Center.

Tropical Depression Nine currently sits south of the Dominican Republic, but its forecast cone has it becoming a tropical storm later today or tomorrow, then turning north and developing into a hurricane by Monday, before strengthening into a major hurricane and striking Florida's Gulf coast south of the Tampa Bay area on Wednesday. Here is the latest. 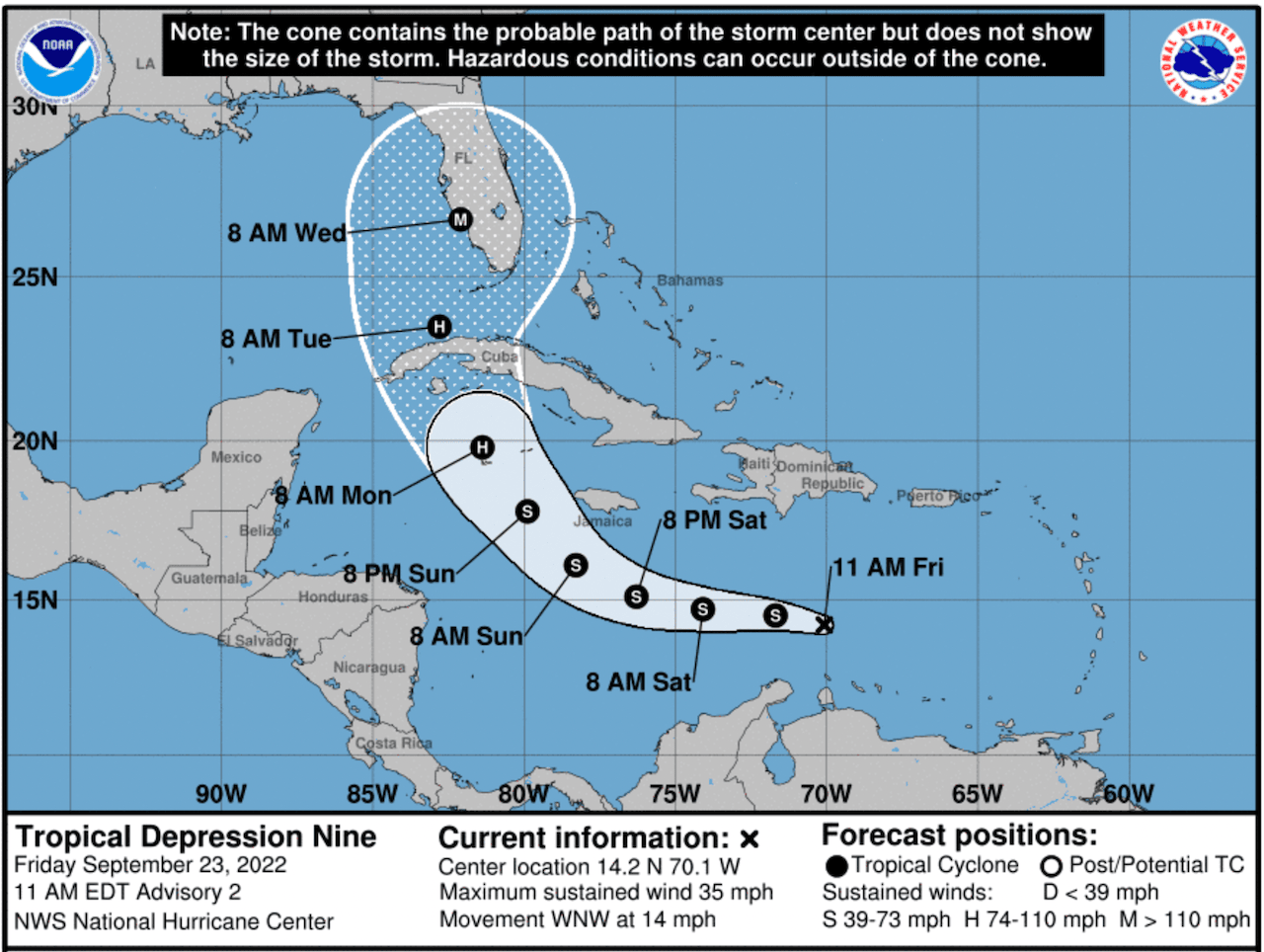 People planning to be in Central Florida visiting Walt Disney World or Universal Orlando should keep an eye on the tropical forecast in case the storm does continue on its current path. If it hits the Gulf Coast as a Category 3 storm or above, it's possible that hurricane force winds could be felt as far inland as the theme parks.

If a hurricane or tropical storm warning is issued for the Orlando area within seven days of your planned visit, both Disney and Universal will allow guests booked through them to cancel or reschedule without penalty. Contact Disney or Universal for more information:

If this storm is the next to become a named storm, it will be "Hermine," which is just close enough to a certain Harry Potter character to make the PR staff at Universal Orlando sweat the inevitable headlines. The last two named Atlantic storms have been Gaston and Fiona, so the current hurricane map looks a bit like an Orlando park meet and greet schedule.

Hurricanes can be erratic, so don't take the current forecast cone as a done deal. It's possible that Hurricane Hermine could end up hundreds of miles away from the Florida theme parks, or might not develop into a major hurricane at all. It's simply to early to tell.

But it most certainly is not too early to plan. Keep an eye on the forecast and be prepared to adjust your travel plans, if necessary. And if you are among our readers and friends in Florida - you know the drill by now. Get ready, and we will be hoping for everyone to stay safe.

Saturday Update: It's now Tropical Storm Ian (a storm off the coast of Africa snagged the Hermine name), and the forecast cone is tracking west of yesterday's. That still leaves Central Florida within the zone, but landfall is looking like it will come farther north up the Gulf coast and later - perhaps Thursday. Keep watching the National Hurricane Center for updates.

Universal PR can breathe. This one will be Ian, not Hermine.

The ride-out crews on the other hand might be in for a rough ride...

The President is scheduled to be in Orlando that day. Looks like that is going to have to be cancelled...again...(first time was cancelled because he had COVID).

The drill is ... if the storm hits, and the parks remain open, that's where we go.

Nice and quiet, because blogs like this tell people about the storms, and yep, they stay away :)

My friend and I have a Universal/HHN/Howl-O-Scream at SeaWorld trip planned for next week. Flying into Orlando on Tuesday around 1 pm and heading back home Sunday. I’ve been keeping an eye on this storm since earlier this week, so obviously I’m a bit anxious. At this point, all I can do is continue to keep an eye out and hope the situation will change for the better because I don’t plan on canceling unless I have no choice. I’m selfishly hoping we don’t get a situation worse than everything being shut down on Wednesday and having to hunker down at our Universal hotel for the day.

I remember being in Disney World in 1988 when Tropical Storm Keith hit and totally soaked. Also in Jacksonville in early 1990s and a few times edge of storms causing problems. Again, early to tell right now as these things can have a habit of turning directions or strength as noted so see how it works, prayers not too awful.

Just missed Hurricane Gaston by two letters. The headline would write itself!

Have Knott's New Policies Made for a Better Scary Farm?