Monsters, Inc: Mike and Sulley to the Rescue 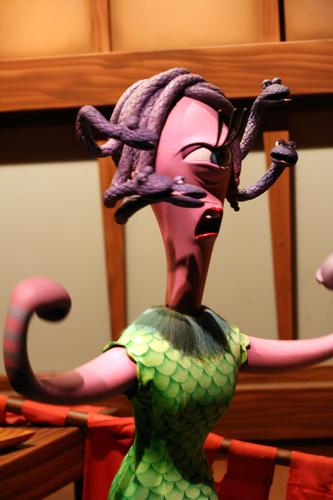 "Monsters, Inc.: Mike and Sulley to the Rescue" opened in late December 2005 in the old "Superstar Limo" show building in the Hollywood Pictures Backlot section of Disney's California Adventure. Like its predecessor, Monsters, Inc. is a dark ride, but the similarity pretty much ends there.

This attraction offers a slow taxicab ride through the city of Monstropolis. Of course, something goes terribly wrong and we soon find that a - gasp! - human child is running loose in the city. Which should sound familiar to anyone who has seen the 2001 Pixar film upon which this ride is based. The ride breaks no new narrative ground, but encapsulates the animated hit with solid animatronic storytelling.

The cheesy figurines from Superstar Limo are long gone, replaced with Mike, Sulley, Randall Boggs, Roz and the toddler Boo, whom Mike and Sulley must return to her bedroom in the human world before Monstropolis' Child Detection Agency gets her. Toddlers will have fun trying to find the animatronic Boo in each scene, and the musical score and pleasant visuals will keep older kids and adults at least moderately entertained. Disney's Imagineers have thrown in a few treats, too: Breathe deep the aroma of ginger while driving through Harryhausen's sushi restaurant, for example.

Reviews of Monsters, Inc: Mike and Sulley to the Rescue

Better than the abomination that was in it's place originally.