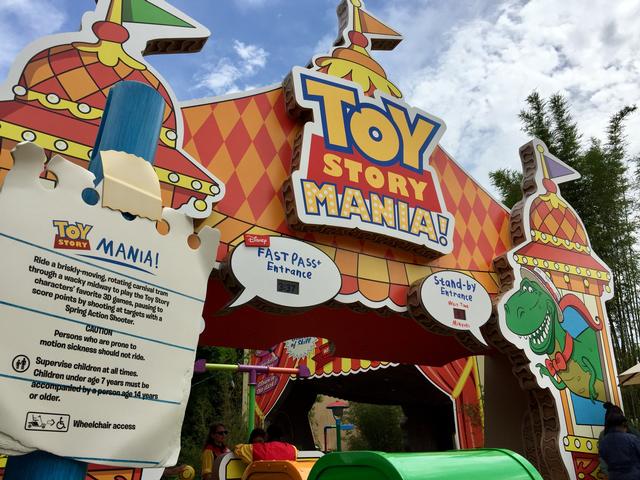 The key to a high score on this game? Work together with your seatmate, who’s your partner for the game. Sure, you’re “competing” with each other, but if you work together, you can reach scores much higher than you can shooting alone, thanks to many “easter eggs” in the games.

Here are the tips and “cheats” that will lead you to a high score: In the first game, Hamm & Eggs, aim for the fox on top of the henhouse in the lower corner of the screen, which spawns several 1,000-point chickens to target. In the next game, Rex and Trixie’s Dino Darts, if you and your partner can break all six lava flow balloons, the volcano will erupt with additional 500-point balloons. In the Green Army Men Shoot Camp, you and your partner should try to break the 2,000-point plates in the corners at the same time, which will reveal an additional row of 2,000-point plates. Watch the tank in the middle of the screen, which will throw 5,000-point plates, too. In the fourth game, Buzz Lightyear’s Flying Tossers, work with your partner to throw rings around all the Little Green Men on the rocket in the middle of the screen. Clear those, and you’ll reveal a monster that you can hit for 500 and 1,000 points a shot. The fifth game, Woody’s Rootin’ Tootin’ Shootin’ Gallery, has three parts. In the first, you and your partner should try to hit each bullseye once, which will spawn additional 1,000- and 2,000-point targets. Shoot through the saloon doors to reveal a bunny and additional 500- and 1,000-point targets. In the mine car scene, hit the bat after the third mine car for 1,000 points. Keep hitting the new mine cars and then hit the next bat, that is worth 5,000. If you can hit that bat, too, then all the mine cars that come out will be worth 5,000 points. In the finale of the game, hit the large bullseye as fast as you can for point values of 500, 1,000 and 2,000 points.

This is a great attraction. Should be full stars definitely. The line is longer but it is worth it. The only problem is my hand gets tired from shooting the targets.

In terms of pure "fun," this ride is one of the best. It is a family favorite and a must-do attraction.