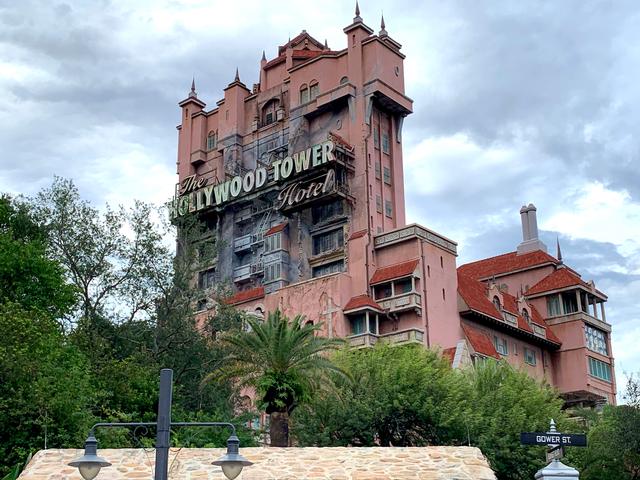 The story takes place in the Hollywood Tower Hotel, an “Old Hollywood” resort from the late 1930’s. Bellhops greet you and direct you to wait in the library. Inside the small room, the lights go out, and an old, black-and-white television turns on to welcome you into an episode of The Twilight Zone. When the bellhops return, they’re not taking you up to your room, but down into the boiler room, where you’ll board a service elevator for ride of your life. This elaborately themed drop ride offers multiple drop sequences, so you’ll probably not get the same ride twice. Note that Twilight Zone creator Rod Serling really does appear in the pre-show film, thanks to clever editing from Disney’s Imagineers, who used clips from dozens of Twilight Zone show introductions to splice together the ride’s pre-show introduction.

The second best ride at DHS (behind RotR) and the superior version of the attraction. Disney really utilized the Twilight Zone theme perfectly with this ride. The immersive queue/preshow and "dark ride" portion of the ride make it stand out as one of the best attractions in Florida and a must do at DHS.

So awesome! And the Twilight Zone theme is perfect.

A Classic. And one that set a standard few rides can match.