The Circle of Life

The Circle of Life is a former movie at Epcot. It is now closed. 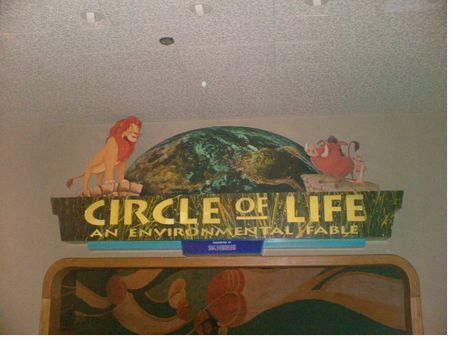 Circle of Life opened in the Harvest Theater on January 21, 1995, as Disney looked to capitalize on the overwhelming success of its animated movie musical, The Lion King, grafting some of the movie's popular characters onto a nature documentary. Circle of Life follows Timon and Pumbaa, as they dam local rivers to create a lake for their planned "Hakuna Matata Lakeside Village." Simba points out that their actions are robbing other animals downstream of the water they need to survive. Then he really rubs it in by telling Timon and Pumbaa that they're acting like a bunch of human beings. Timon and Pumbaa learn the lesson and remove the dam, restoring the environment for all the downstream animals. (Disney animation fans were amused when the whole "dam-blocking-the-animals'-water" thing later became the major plot point in rival Dreamworks' Madagascar: Escape 2 Africa.)