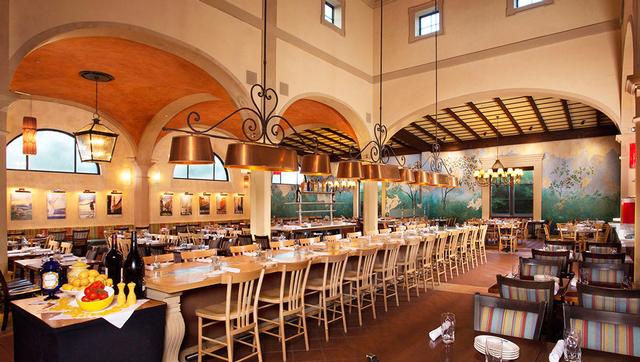 Created in the style of Venice’s famous Piazza San Marco, Epcot’s Italy pavilion features two restaurants. Located at the rear of the pavilion, Via Napoli (run by southern California’s Patina Group, not Disney) features Neapolitan thin-crust, wood-fired pizza. To make the pizza as authentic as possible, Via Napoli ships water from Pennsylvania to use in the dough because it shares much of the same water qualities as that found in Naples. Via Napoli’s three pizza ovens are named for Italy’s three volcanoes: Etna, Stromboli, and Vesuvius.

Via Napoli offers a wide selection of pasta and antipasti, but the highlight is the pizza, which is served in three sizes, a 10-inch “individual,” a 20-inch “large,” and a “half meter” that could feed your Little League team. Prices range from $8-14 for antipasti, up to $42 for the half-meter pizzas.

Reviews of Via Napoli