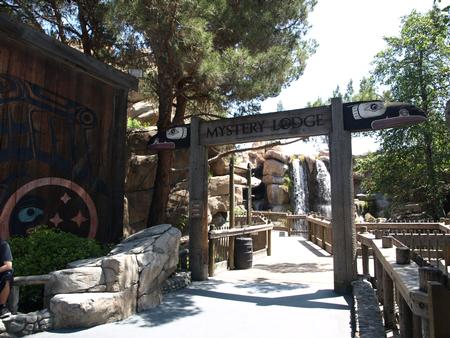 Mystery Lodge opened in 1994, one of the last attractions added to Knott's Berry Farm before its sale to Cedar Fair in the mid-1990s. Created by Bob Rogers' BRC Imagination Arts, Mystery Lodge uses a "Holavision" system that Rogers had previously used in the similar "Spirit Lodge" show for the General Motors pavilion at Vancouver's Expo 86 world's fair.

The show takes place in a theater that looks insider a Pacific Northwest Native American longhouse. An elderly storyteller greets you from inside the longhouse, where a fire burns in the middle of the room. As smoke from the fire twists into shapes, the storyteller believes to have seen an owl, a symbol of death. That prompts the man into a reflection upon his life, as he shares stories from his past, which collectively help illustrate the Pacific Northwest Native American experience.

Presented with great reverence, not to mention the "how'd they do that" effects (perhaps using 'Pepper's Ghost'?), Mystery Lodge surprises many Knott's visitors who stumble into the show looking only for a cool place to sit for a few moments. This is the sort of educational, yet effect-laden, show you'd expect to see someplace like Epcot, and not necessarily in what's become known as mostly an iron park.

Do not miss this show, which is by far the best thing at Knott's.