Harry Potter and the Escape from Gringotts 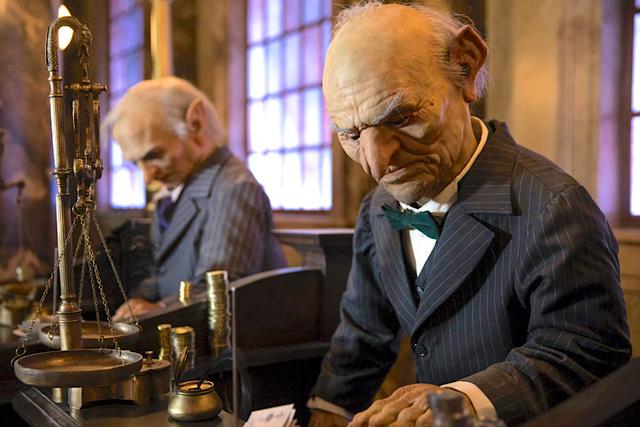 You are visiting Gringotts Bank to meet with Bill Weasley and tour the underground vaults before opening your own Gringotts account. However, you just happen to be visiting on the same day that Harry, Ron, and Hermoine have disguised themselves to break into Bellatrix Lestrange’s vault, from Harry Potter and the Deathly Hallows. Before your tour can begin, Bellatrix finds you and attacks, soon to be joined by Voldemort. Will you ever escape from the “safest place on Earth”? A hybrid of roller coaster and motion-base ride systems, coupled with 3D filmed scenes and practical effects, Escape from Gringotts features filmed performances from Helena Bonham Carter, Ralph Finnes, and Domhnall Gleeson, who reprised their roles as Bellatrix, Voldemort, and Bill Weasley, respectively, for this ride.

Reviews of Harry Potter and the Escape from Gringotts

Though not as thrilling as Forbidden Journey or Hagrids, Gringotts is a worthy addition to the Harry Potter lands. The entire queue could be an entire separate experience, similar to FJ. However, I feel that the abundance of screens during the ride drags the attraction's quality down.

Both this and “Forbidden Journey” are among the best theme park attractions developed in recent years.

An amazing achievement that puts you inside a moment from the films, but from a perspective you never saw in the films or books. It's not especially a "thrill" ride, but it includes some nifty physical moments. I love it.

One of the coolest rides at either park. Combines some great thrill moments combined with some great screen sequences that give you the experience of being in one of the movies

Amazing ride which is extra fun to ride with someone that's never been on it. The beginning part is simply awesome!

Wonderful and elite attraction. The waiting line is one of the greatest ever made. By the time you load the ride vehicle you feel like you are deep within the vault. The only minor nitpick I have is that I was hoping a bit more thrilling. That is why I rate The Mummy a touch better. But still, this is amazing and also has some of the best "curb appeal" of any ride ever made.