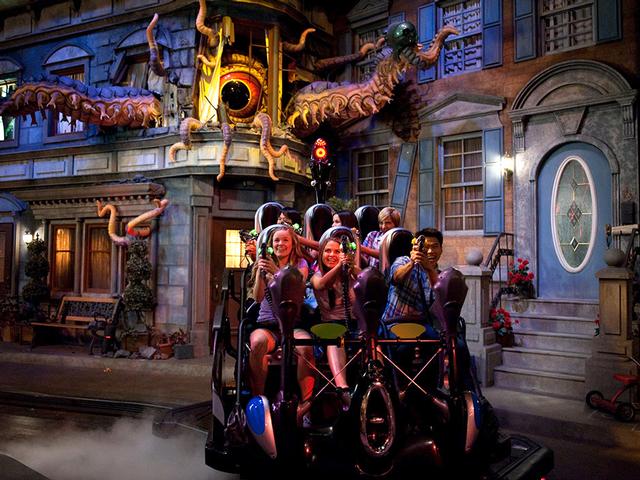 Enter the Men in Black headquarters for training in identifying and neutralizing space aliens that have invaded New York City. You’ll ride in a six-person, spinning vehicle through the streets of New York, zapping aliens in this video game come to life. You are competing individually for top scores, and your car also is competing as a team against the car on the track opposite yours. A high top score earns you “the suit” as an MIB agent.

A few tips: Never let up on the trigger. When you hit a target, keep hitting it as long as you’re scoring points from it. Aliens on the second floors of the buildings are typically worth more than those on the ground level. After the scene with the big spaceship, look for an alien on a bench, reading a newspaper, and shoot it. The newspaper will lower to reveal an alien Steven Spielberg, whom you can hit for big points. When your car turns to face the other car in the “scanning” scene, aim for the big red light “exhaust port” atop the other car. (Heck, turn around and shoot at your own exhaust port, too, for extra points.) Finally, when Zed tells you to push the red button, the first one in the car to push it gets an additional 100,000 points. Aggressive use of the available single rider line can get you the extra rides, and the experience, you need to go for the maximum high score of 999,999.

I'm not a huge fan of the shooting/competing type of ride. I just like the theming of the waiting line and the attraction. It's not a must ride for me but I certainly enjoy it quite a bit.

Cool to walk through the line, but the ride itself isn't that great. You shoot all kinds of aliens, but nothing actually happens when you shoot them...definitely has potential to be better.