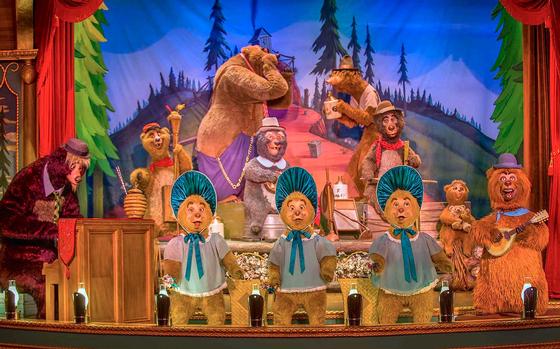 Conceived for a never-built ski resort the Walt Disney Company planned for the Mineral King area in California, the Country Bear Jamboree became one of the few attractions that debuted at Walt Disney World's Magic Kingdom before the original Disneyland. Opening with the park in October 1971, the Country Bear Jamboree featured the voices of country music star Tex Ritter as Big Al and Disney Legend Thurl Ravenscroft as Buff the Bison. (You'll also hear Ravenscroft as the lead "Singing Bust" in the graveyard of the Haunted Mansion, the singer of "You're a Mean One, Mr. Grinch" in the original Grinch Who Stole Christmas TV show, as well as the voice of Tony the Tiger in numerous TV commercials.) Disney created two more versions of the Country Bear show, "The Country Bear Christmas Special," and "The Country Bear Vacation Hoedown," neither of which play in the Magic Kingdom any longer. In 2012, Disney cut two songs and some dialogue from the Jamboree, cutting five minutes from the show, which now plays at a little over 10 minutes. Country Bear provides an opportunity to sit in a dark, air-conditioned theater with minimal wait, making it an excellent break in the middle of a hot, crowded, sunny day.