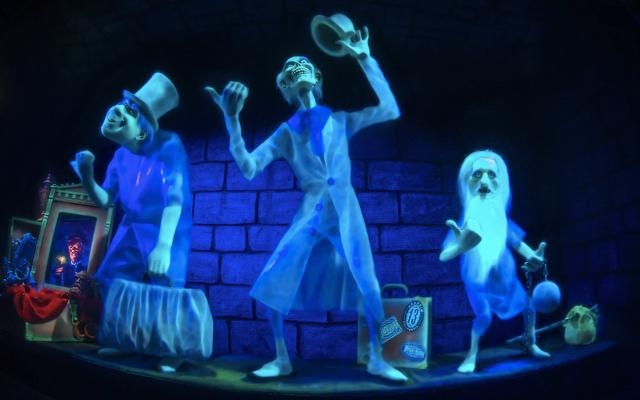 This Dutch Gothic Revival New England mansion looks innocent enough on the outside, but 999 "happy haunts" reside inside. The Haunted Mansion long has been one of Disney's most popular attractions at theme parks around the world, with its deft use of stagecraft to create a variety of illusions.

The story's a bit murky, perhaps due to the large number of Imagineers who worked on this project at various times before its original version debuted at Disneyland in 1969. But you've got a sea captain who ends up dead marrying a woman who seems to have had a series of husbands who didn't last long.

Once inside the mansion, you'll start your adventure in the "stretch" room before walking down the corridor to board your "Doom Buggy." Yes, the room actually stretches, with the ceiling rising above you as your "Ghost Host" welcomes you inside. If you're curious, the original Haunted Mansion at Disneyland also features a stretch room — but in that one, the ceiling stays in place as the floor descends, taking you underground so that you can pass underneath the parks's railroad tracks to get into the Mansion's ride building beyond. In the Magic Kingdom, the railroad takes a wide turn around the Mansion ride building, so there's no need for the elevator and the ceiling rises above you instead. (Plus, there's that water table issue making digging underground impossible.) In 2011, Disney added some "interactive" elements to the queue — additional "punny" grave markers, some of which play music or spit water at your touch.

One of my favorite attractions of all time. Amazing theming, music, and immersion. And this is better than Disneyland by a little bit. It's also a fast-loading ride so the waits are rarely unbearable.