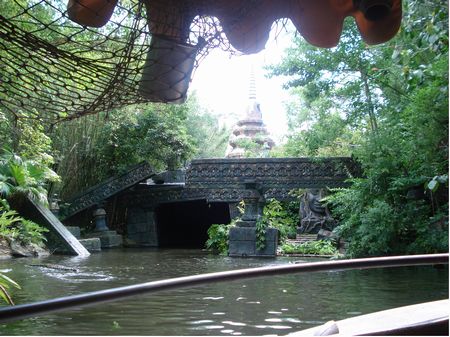 Climb aboard a tramp steamer inspired by the movie The African Queen for a cruise down the rivers of Asia, Africa, and South America. Your skipper will point out the animatronic “wildlife" along the way, while treating you to his spiel of pun-laden jokes.

The Jungle Cruise is as good as your skipper makes it. Several comics and Disney executives (including comedian Steve Martin and Pixar chief John Lasseter) got their start as skippers on Disneyland’s Jungle Cruise. A great skipper, with fun jokes and the right delivery, can make a visit to the Jungle Cruise as much fun as a visit to a comedy club. A weak skipper, though, can have you noticing just how robotic some of those animals look.

A very good ride that can elevate to greatness with the right tour guide. The cave is an added element that Disneyland doesn't have that really adds to the ride.