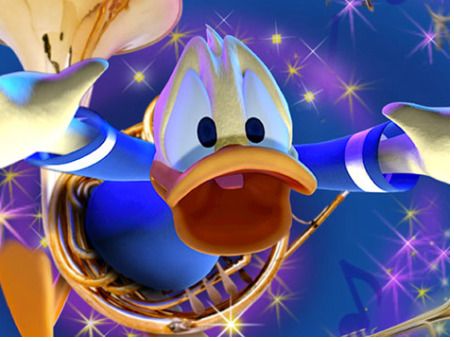 Even though the title is "Mickey's" PhilharMagic, Donald Duck is the star of this 12-minute 3D movie musical review, which plays in the Magic Kingdom's Fantasyland Theater. As the movie begins, Donald is unpacking the instruments for Mickey's orchestra, when he decides to try on the Big Cheese's famous sorcerer's hat from the movie Fantasia. The instruments spring to life, Donald loses control and soon we're flying through a musical medley of famous songs and scenes from top Disney animated films. Eventually, of course, Mickey returns to retrieve his hat and save the day. And Donald? Well, he gets his with a tuba blast into the theater's back wall.

Directed by Oliver and Company and The Prince and the Pauper director George Scribner, Mickey's PhilharMagic debuted in 2003 and represents the first time that Disney created computer-animated versions of many of its classic characters, including Mickey and Donald. Disney used archival recordings for much of the dialogue in the film, with some of the characters' original voice actors returning to supply the remaining dialogue.

This is an excellent 4D movie with classic Disney songs. Love it!

Pretty awesome the first time I went on it in the mid-2000's. The quality of the picture has gone down and hindered it a bit. But the Peter Pan and Aladdin scenes are a blast. Recommended.