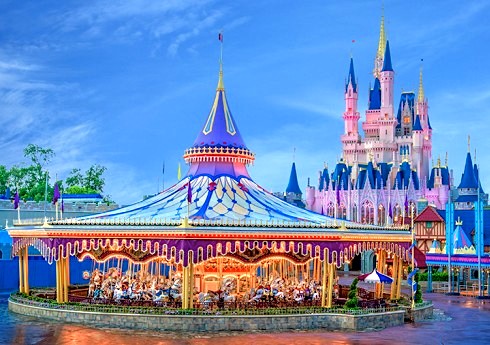 On June 1, 2010, Disney changed the name of Cinderella's Golden Carrousel to Prince Charming Regal Carrousel, and added a backstory to the ride: Now, it's supposedly a training device that the Prince developed after marrying Cinderella, so that the villagers could use it to test their horsemanship skills. No that it matters, though. It's a beautifully restored carousel, built by the Philadelphia Toboggan company in 1917 – one of about 30 of that company's original carousels left working in the United States. Each of the 90 horses is unique, hand-painted, and laid with gold leaf, silver and bronze. Stationary seating for persons with disabilities also is available.