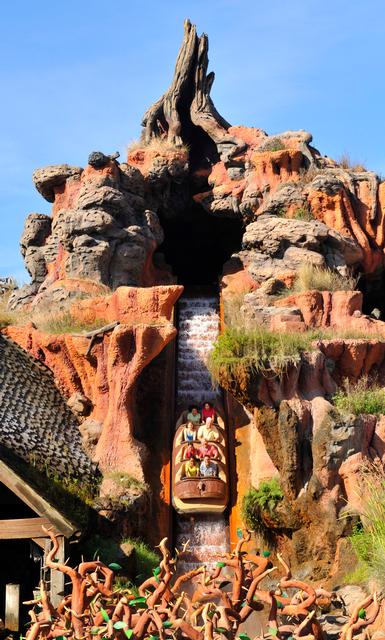 Song of the South mixed live action with animation back in the 1950s to tell Joel Chandler Harris' "Uncle Remus" stories. Despite the movie's innovative technique, Disney no longer sells nor screens it, in large part do to concerns that the film's African-American narrator evokes minstrel stereotypes. That put Disney is a bit of a spot, though, because the film's signature tune, "Zip A Dee Doo Dah" is one of the all-time Disney greats.

Enter Splash Mountain. In the late 1980s, Disney's designers had the idea of using the film's Brer Rabbit, Brer Bear and Brer Fox animated characters in a musical log flume ride, which would allow them to spotlight "Zip A Dee Do Dah" and other beloved songs and scenes from the film, while avoiding all the controversy surrounding the movie that launched them.

Don't mind the backstory, though. Fans love the ride for what it is, a musical romp with fun characters, some nifty twists and bumps in the middle of the mountain, and a big, soaking wet, 40-miles-per-hour, 52-foot drop at the end. Well, not quite the end. You've still got a rousing musical finale to drift through on your way back to the loading station.

My favorite ride. The perfect combination of amazing theming,thrill,story,nostalgia, and music. It is a perfect attraction in my opinion.