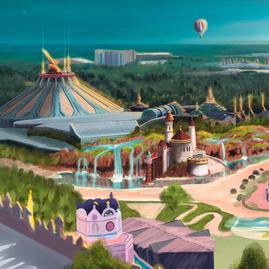 In his youth in The Netherlands, Van Roosendaal attends weekly painting and drawing classes and studies at the Design Academy in Eindhoven and holds a degree in international communication management from the University of Applied Sciences for Advanced European Studies in The Hague.

After his training as a graphic designer at the Advertising Academy in Vienna and working several years in the field of commercial graphic design, Van Roosendaal finds his way back to his passion to freely express his world of ideas on paper and canvas.

The choice of his projects reflects his social commitment. From 2009 to 2013, Van Roosendaal develops a visual guidance system for Life Ball, the world’s largest AIDS charity event at Vienna City Hall.

In order to make residents aware of the hidden beauty of their own living environments, Van Roosendaal uses vacant space in Vienna's ground floor zones in 2014 for the project Enchanted Vienna - the urban fairytale path (Wie(n) verzaubert – der Stadtmärchenpfad).

The project results in nine fairy-tale installations with dioramas, an animated short film, light installations and improvisation theater, which were exhibited in 2015 in the Reindorfgasse street and in 2016/17 in the Freihausviertel quarter in Vienna. TV and radio stations as well as print and online media report on the project, which was awarded the do-it-yourself award.

For the EuroPride Vienna 2019 Van Roosendaal organizes his first solo exhibition in R.O.P.P. The selected pieces display the artist's encounters and experiences in the gay scene in Vienna. Van Roosendaal tackles the subject of the (in)visibility of the gay meeting places of this city.

In September 2019 Yella Yella invites Van Roosendaal to exhibit his Urban Sketches on the occasion of Architecture Day 2019.

Despite the corona pandemic, Van Roosendaal manages to realize his exhibition Pride, Shame & Prejudice! in October 2020. These works deal with existential queer issues, questions so-called LGBTIQ pride and invite people to ponder the causes of gay shame and how to deal with prejudices inside and outside the gay community.

At the end of 2021, the artist publishes his first wall calendar with twelve Viennese urban watercolors. The originals are exhibited in the Atelier Roland Puschitz. Van Roosendaal's through-composed paintings tell colorful, dreamy stories full of specific Viennese details and allow the viewer to perceive and question their own urban environment again.

Van Roosendaal works and lives in Vienna with his husband, the singer Mario Amiro in polyamorous relationships.